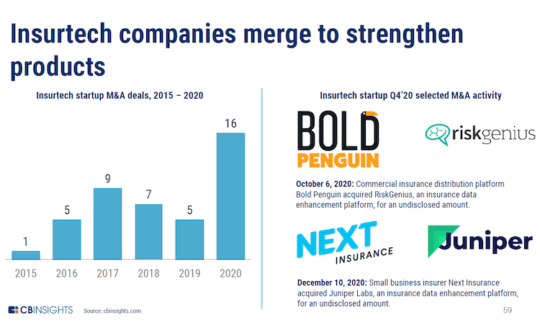 While 2020 was in some respects a boon for the digital advancement of insurance companies, the year was a mixed bag for the InsurTech movement, according to Niall Williams, an Intelligence Analyst at CB Insights (New York). While overall investment in InsurTech was up, patterns of investment varied. One of biggest takeaways of 2020 was “the big got bigger,” Williams told Insurance Innovation Reporter, with reference to research from two recent CB Insights reports.

“Funding to the big players drives news, but under the hood, budgets were cut or uncertain for a lot of insurers, who had to be more ruthless in investments made and faced the challenge of demonstrating clear ROI,” Williams comments. 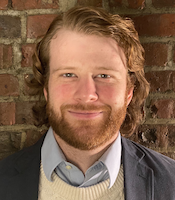 According to CB Insights’ report “Insurance Tech Q4 2020,” InsurTech funding finished the year at an all-time high of $7.1 billion across 337 deals, representing a 12 percent increase in funding and a 20 percent increase in deals compare to 2019. Other key findings of the study include continued investment in direct-to-consumer home insurers, with Hippo (San Francisco) receiving $350 million in a series F round, and Paris based Luko seeing a $60 million series B round. The study also reports life insurance-focused InsurTechs “quietly maturing”—while L&H InsurTechs represented just 27 percent of total deals in Q4 2020, over the last two quarters, they represented 50 percent of the largest  ($100M+) later-stage deals.

The impact of the COVID-19 pandemic was not negligible, but it wasn’t the big InsurTech story of 2020 either, Williams opines. Shifting work from the office to the home was a significant undertaking for many insurers—and adoption and training on enabling technologies was likely too be a higher priority than some more advanced technologies, he says.

Among the InsurTech-related findings shared in CB Insights’ “State Of Fintech Report: Investment & Sector Trends To Watch,” Williams notes that InsurTech distributors continue to prosper through funding from public markets. Renters insurer Lemonade raised $319 million at a $1.5 billion valuation at the date of its IPO, June 2, 2020. Metromile announced its intention to go public on Nov. 24, 2020, valued at $1.3 billion on the date of its acquisition by NSU Acquisition Corp II (INSU II), a publicly-traded special purpose acquisition company (SPAC) sponsored by Cohen & Company (Philadelphia). Auto insurer Root went public on Oct. 29, 2020, raising $724 million at a $6.75 billion valuation. Williams notes that Hippo is rumored to also be looking to go public in 2021, either through a traditional IPO or a merger with a SPAC. The company raised $350 million from MS&AD (Tokyo) Insurance in November.

Some of the biggest investments to come into insurance technology during 2020 were to established vertical software companies rather than InsurTechs, Williams notes. “In terms of aggregate deals, and more so in funding, it went more to big companies especially B2B software,” he comments.

Most notably Duck Creek (Boston) raised $230 million from new and existing investors in mid-June 2020, and then went public, raising $405 million upon its IPO on Aug. 14 (this week Duck Creek announced pricing of a public offering of common stock). In late August, Majesco (Morristown, N.J.) was acquired by Thoma Bravo (Chiicago) on an offer based on a valuation of $729 million. Outside the core system/insurance platform market, in Feb. 2020, One Inc. (Folsom, Calif.) was acquired by Great Hill Partners  a Boston-based growth-oriented private equity firm. Both Majesco and One Inc went on to leverage their boosted financial strength by making key acquisitions. One Inc acquired Invenger Technologies, Inc. (Simi Valley, Calif.), including its flagship digital claims payment product, Invenger-InsurPay in August 2020. Earlier this month, Majesco announced the acquisition of ClaimVantage (Dublin/Portland, Maine.), a global provider of enterprise claims software and absence and accommodation management for the life and annuities market segment, to strengthen and scale its L&A and group health business.

Williams also notes a trend of M&A on the part of InsurTechs, both providers and distributors. In December 2020, Next Insurance, a startup direct seller of small business insurance, acquired Juniper Labs (Denver), an alternative open data and underwriting technology focused on small businesses. Next Insurance  announced in September that it had raised $250 million in a Series D financing led by CapitalG, Alphabet’s (Mountain View, Calif.) independent growth fund, with participation from FinTLV, a Tel Aviv-based InsurTech VC, and existing investor Munich Re (Munich). In October, Bold Penguin (Columbus, Ohio) provider of a digital exchange designed to streamline the quote-to-sale process for small small business insurance, acquired RiskGenius, (Overland Park, Kan.), an insurance document intelligence software provider. In January 2020, Bold Penguin announced its acquisition of xagent (Reston, Va.), an independent, multi-quote platform for standard and surplus lines business insurance market. Bold Penguin was itself acquired by American Family Insurance in January.  “These are further examples of the big getting bigger, the rich getting richer in the InsurTech world of 2020,” Williams comments.