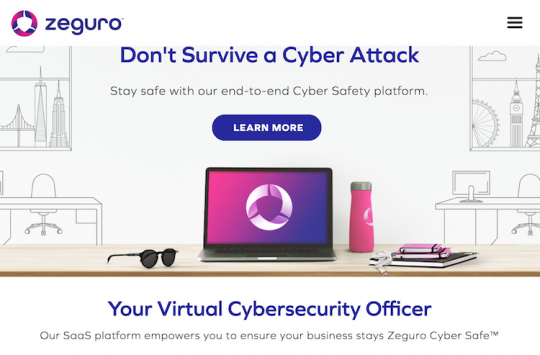 Zeguro, a San Francisco-based startup end-to-end cyber safety platform and insurance provider for small to mid-sized enterprises (SMEs), has announced two appointments to its executive team. Heidi Elgaard has been named VP of Marketing/Growth and Dan Gordon has joined Zeguro’s executive team as Advisor. The announcement follows Zeguro’s closing of a $5 million seed round in late 2018. “With Heidi Elgaard and Dan Gordon joining Zeguro’s executive team as VP of Marketing/Growth and Advisor respectively, we’ve added seasoned talent in key leadership at a critical stage of growth,” comments Sidd Gavirneni, CEO, Zeguro. “Elgaard is already executing a targeted marketing and growth strategy to get our product in front of small businesses in places like finance, healthcare and IT, while Gordon’s experience with Guidewire will be critical to our Cyber Safety Platform implementation with the insurance side”

Dan Gordon is a veteran enterprise software product executive, having led the product management organization at Guidewire Software (Foster City, Calif.) from 2003 to 2014, one of the most successful core insurance and related software providers to the property/casualty industry. During Gordon’s time at Guidewire, the company grew from $2 million to $350 million in revenue across 17 countries. As former VP of Marketing at Scandit (Zurich), Elgaard oversaw both U.S. market and global growth and helped its mobile data capture platform capture the attention of leading enterprises such as Sephora, Louis Vuitton, DHL, and Levi Strauss & Co. Elgaard is also a mentor with GSV Labs and startup advisor, according to a Zeguro statement.

Describing these appointments as “key hires,” Zeguro says it expects them provide exceptional value and expertise applied directly to the company’s platform, translating into value to the end user. Zeguro says that, through its end-to-end cyber-safety platform, it aims to address inefficiencies in every aspect of the traditional insurance ecosystem, including distribution, pricing and claims management. “The traditional insurance industry infrastructure was not designed to handle the variables and ever-changing risk profiles of businesses in the digital age,” a Zeguro statement says. “Pricing in the traditional structure is based on a static point in time, whereas with cyber risk, the security profile of a company changes depending on many variables, including systems used, number of employees, devices, networks, and even employee behavior. For this reason, Zeguro uses customizable pricing that takes the real-time monitoring and risk profile of a company into account. It’s the combination of easy-to-use technology tools and customizable cyber insurance that make us best-in-class.” Zeguro’s name is a play on the Spanish word “seguro” meaning “safe” or “secure,” with the plural form “seguros” meaning “insurance,” according to Dan Smith, president and co-founder of Zeguro. “We wanted it to be a bit whimsical and a new word to give us that difference in the marketplace since what we do is cybersecurity,” Smith remarks.

Insurance Leadership: Survival of the Fittest in the Digital Age