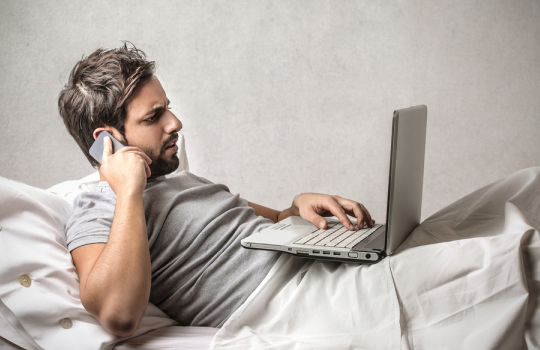 Apparently, if you want to be successful you need to get up two hours earlier than you do currently. You can then get through your ever expanding to-do list. FastCompany this week wrote about how really productive people get up insanely early.

It appears to be part of wider media coverage (eight articles on FastCompany alone in 2014) about things we must get better at doing. Early rising is up there on the list along with mindfulness, eating more super foods, and using apps to increase our productivity.

I find the notion of waking up well before sunrise abhorrent and the headline of successful early risers leaves me feeling like a failure. Along with marathon running, it is yet another thing I will ever achieve. This external pressure is unhelpful. Comparisons and an awareness of what others do is normal and useful much of the time. But in my view, there is something unhelpful about this narrative of “really successful people.”

Our inner critics need little encouragement and new stories like this are fodder for the inner voice. We are social creatures who have a strong need to belong to our tribes. Such articles provide insight into what our tribe (in this case, successful corporates) is doing and ergo, what we should be doing.

(Related: 6 Ways to Reinforce Trust and Maximize IT productivity)

A client is an angel investor in tech related startups. She has successfully run global firms, built her own value-driven investment portfolio, travels widely, and wants for very little in life. Except her inner critic torments her. She calls it the Zuckerberg gremlin.

This entrepreneur inner critic feeds off a belief that she needs to do more and that she really is inherently lazy. Thanks to this limited belief, she’s on a perpetual treadmill where success and happiness remains elusive. Her inner critic must have read all the latest articles on getting up early, sleeping less, drinking more coffee, completing marathons, learning to cook the French five sauces, and being a successful ‘mumpreneuer’.

If this story sounds extreme to you, know it’s more common than you think. As a coach, I am possibly one of the few people who gets to hear about people’s inner critics. They exist in us all.

Most of us are have a belief system around working hard and delivering results, which likely forms the basis of our success to date. It is when this belief becomes a critical voice in our head berating us for what we are not doing that it becomes unhelpful. At this point, our belief is in charge of us.

The habits of successful and productive people are varied and many. For the most part, we navigate our own way up and around the corporate ladder.

There is something disturbing about the impact of these business news sites. For the most part, we are all our own worst bosses telling ourselves we could and should really be doing more. Executives I work with are relentless drivers of themselves. We don’t need the media to ride the coattails of this narrative.

When Is Enough Really Enough?

I spent a lot of time as a coach highlighting to executive both their wonderful qualities and their incredible achievements. As ridiculous as it sounds, its often one of the few places where they get to celebrate they are enough. The combination of inner critics and external comparisons have them playing a small life.

When are we going to stop putting more pressure on ourselves? When is enough really enough? When is that next ‘must-do’ thing – like getting up 2 hours earlier – just one thing too many?

Would two hours make a difference to your to-do list? Possibly. What will make a bigger difference is when we start to embrace ourselves as being good enough in this moment. Let us show ourselves more compassion, and we will not only be happier as individuals, but we will be more creative, effective and productive as professionals.