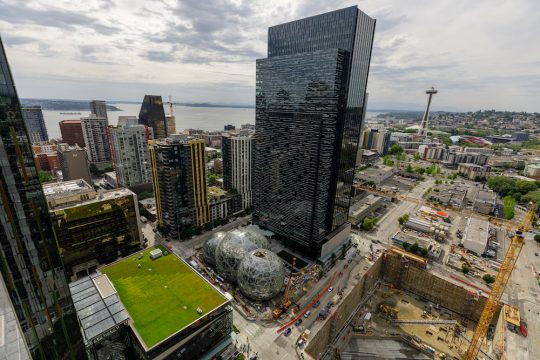 One of the most terrifying recent events in the U.S. insurance industry was the Google Compare online auto insurance aggregator and comparison site experiment which ran for about a year, formally ending on March 23, 2016. To insurers’ relief, that experiment failed, but now Amazon (Seattle) has appeared to have made its opening gambit into the U.S. insurance industry. This week the company announced it was partnering with Berkshire Hathaway (Omaha) and JPMorgan Chase to form an independent company directed at reducing healthcare costs, starting with the three companies’ own domestic employee base of over 500,000. The partnering companies say the new entity’s initial focus will be on technology solutions to provide their U.S. employees with simplified, high quality and transparent healthcare at a reasonable cost. The initiative is in its early planning stages, with the initial formation of the company under the direction of Todd Combs, an investment officer of Berkshire Hathaway; Marvelle Sullivan Berchtold, Managing Director, JPMorgan Chase; and Beth Galetti, a Senior Vice President at Amazon.

In the companies’ announcement of the partnership, Berkshire Hathaway Chairman and CEO Warren Buffet referred to rising costs of health care as behaving like “a hungry tapeworm” on the American economy. “Our group does not come to this problem with answers, but we also do not accept it as inevitable,” Buffet commented. “Rather, we share the belief that putting our collective resources behind the country’s best talent can, in time, check the rise in health costs while concurrently enhancing patient satisfaction and outcomes.”

Taking a ‘Beginner’s Mind’ to the Challenges of U.S. Healthcare

Amazon CEO Jeff Bezos acknowledged the complexity of the healthcare system and said that he and his partners were facing the challenged “open-eyed about the degree of difficulty.” He cited the need for talented experts but also “a beginner’s mind” and a long-term approach. Jamie Dimon, Chairman and CEO of JPMorgan Chase noted the wants of “our people” for transparency and control in managing their healthcare but implied a broader ambition on the part of the intitiative’s partners. “The three of our companies have extraordinary resources, and our goal is to create solutions that benefit our U.S. employees, their families and, potentially, all Americans.”

There’s been no shortage of speculation lately about whether Amazon would enter the insurance market, notes Matthew Josefowicz, CEO of Novarica (Boston) at the research and analyst firm’s blog. For example, he notes, observers speculated about whether the company would be a distributor—applying its legendary customer-obsession to creating an optimized buying experience—or whether Amazon would disrupt the pharmaceutical benefits business with its supply-chain brilliance.

“It turns out what they have in mind first is disrupting the health insurance market by creating a tech-based, non-profit insurer for their own employees, along with Berkshire Hathaway and JP Morgan,” Josefowicz concludes. “Let that sink in for a minute. Arguably the world’s most important entrepreneur, insurance investor, and banker are so frustrated with the health insurance business that they’re creating a non-profit alternative.”

Novarica has long staked-out a position on potential insurance industry disruption that distributors are not the only intermediaries at risk. Josefowicz advises that any business that stands between risk-bearing customers and pools of capital is vulnerable to disintermediation if they don’t do their job well enough to justify their costs.

The new Amazon venture differs from Google’s foray into insurance in that Amazon is going into the proposition to serve an existing client base, notes Mike Fitzgerald, Senior Analyst at Boston-based research firm Celent. “Google was building a quote comparison solution which sought new customers by taking that business away from another distributor,” he says. “In the Amazon healthcare situation, 500,000 employees of their partners will be waiting to be serviced by the platform that Amazon offers.”

Observers will be intensely interested in seeing how Amazon’s supply chain expertise transfers to healthcare, Fitzgerald suggests. “One would expect there to be significant cost savings and service improvements. However, these will be constrained by regulatory and entrenched interests.”

Exactly what form the new company will take remains unclear, but Novarica’s Josefowicz expects a combination of different elements of payer/provider/process manager, eliminating as many intermediaries and hand-offs as possible. “It won’t look like a clone of today’s health payers,” he opines. Celent’s Fitzgerald agrees that the operating model of the new entity is unlikely to fall neatly into either the payer or provider camp, saying that the partner companies have an opportunity to break with tradition. “For example, with over 500,000 members, why would they need to purchase prescriptions through the standard market? Will they set up an Amazon marketplace for scripts and negotiate their own pricing?” he queries. “Given their capabilities with data, will they create a different provider/doctor remuneration plan based on access and outcome?”

Whatever form the new company takes, it is likely to be a disruptive force, given the tremendous inefficiencies in the delivery and financing of healthcare in the U.S., according to Mark Breading, a partner at research and advisory firm SMA (Boston).

“This substantial partnership is likely to be a disruptive force purely because of the track record, financial clout, and resources that these companies can muster,” Breading says. “Although details about the approach are sketchy at this stage, the one curious aspect of the announcement is that the entity they intend to form will be a not-for-profit. Perhaps it is my free-market bias showing, but it seems to me that the profit motive would play an important role. But who am I to outguess Bezos, Buffet, and Dimon?”

Where Could the Venture Lead?

The not-for-profit play makes sense for delivering operational efficiencies to the three partnering companies and could serve as a proof of concept for expansion beyond their walls, as JPMorgan Chase’s Dimon suggests. Whatever emerges should be transferrable to other consumer insurance—and possibly small commercial insurance—lines of business, suggests Celent’s Fitzgerald.

Novarica’s Josefowicz notes the possibility that, if the Amazon-Berkshire-JPM Alliance figures out health insurance, it may then expand to other voluntary benefits for employees, like life and AD&D. “From there, it could go into personal auto and other voluntary property/casualty benefits,” he says. “Of course, once Amazon gets comfortable in this sector in the protected market of their employees, there’s no reason they couldn’t expand to 65 million Amazon Prime households.”

It remains to be seen what the new company’s model is, but there is potential for a major partnership of this sort to enter the property/casualty or life insurance space and become an important player, SMA’s Breading agrees. “Many are wondering how Amazon, Apple, Facebook, and Google will enter the U.S. insurance market, and this type of partnership structure may be the way they do it,” Breading says.

Another possibility is for Amazon and Google to partner directly with globally important property/casualty and life insurers. “That would be the InsurTech to end all InsurTechs,” Breading comments.