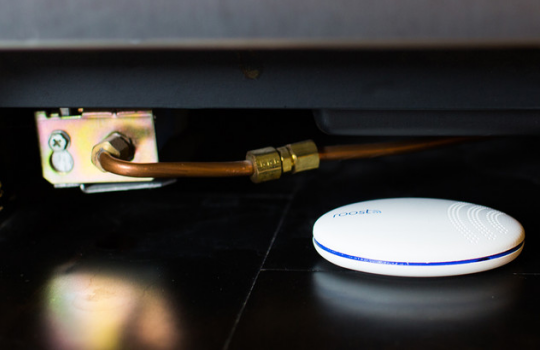 Roost (Sunnyvale, Calif.) first came on the scene with its Roost Smart Battery, a “smart home” smoke and fire detector. The company recently launched Roost Smart Water and Freeze Detector, which follows the original device’s pattern of being an affordable measure for reducing risk in the interest of both consumers and insurers.  Providing a connected sensor for one of the most prevalent sources of homeowners insurance loss—water where it shouldn’t be—The Roost Smart Water and Freeze Detector identifies and alerts homeowners to four major home emergencies through their smartphone, including water damage due to leaks from broken pipes, appliances, and basements leaks; frozen pipes water damage; molds and mildew damage caused by high humidity conditions; inefficient energy use due to abnormal home indoor temperature, caused by problems with heating and cooling systems, power, or gaps in home seals or windows to the outside. We recently enjoyed an exchange with David Henry, Roost’s Chief Marketing Officer, to discuss this latest product and what it means for Roost’s relationship with the insurance industry.

Insurance Innovation Reporter: How Roost has worked with insurers so far, what the company hopes to achieve with insurers with this development.

David Henry, Chief Marketing Officer, Roost: We are actively working to position ourselves as the leader in providing “Telematics for the Home” to the insurance industry.  Our first product, the Roost 9V Smart Battery, is presently being piloted with a number of top-tier insurers to verify performance and acceptance across consumer policyholders. Fire loss claims in the U.S. exceed $9 billion/year. With the addition of the new Roost Smart Water Leak and Freeze Detector, we have extended our coverage to now include the $8+ billion/year water loss claim peril.

The core benefits of Roost are to deliver lower claim payouts, higher policyholder engagement and more effective customer acquisition.  For insurers, Roost simply and affordably captures/provides real-time structured data around the home that may be used to respond to perils significantly faster. Through this mitigation, insurers will be able to quantify risk and establish policy pricing in a unique new way for the home.

IIR: How does the Roost Smart Water and Freeze Detector work, and how does it fit in with your product set?

DH: For deployment of the Roost Smart Water and Freeze Detector we are leveraging our existing Roost app, Wi-Fi components and proprietary set-up process as well as the simple and affordable approach that is consistent with the Roost brand.

The detector works by connecting to the Roost app and home Wi-Fi in less than 5 minutes. Homeowners can place water leak detectors around the home where you would expect water leaks, such as hot water heaters, refrigerators, dishwasher, sinks, toilets and basements.

There are two concentric metal rings on the bottom of the detector. When water forms and touches both rings, this connection triggers both an audible alarm as well as a notification to your smartphone—that is, through Wi-Fi to the Roost cloud and then your phone—an early warning that a leak is forming!

By establishing thresholds for the temperature and humidity sensors—also included in this device—smartphone alerts can also be sent to notify when these settings are reached.  For example, setting a 35-degree temperature limit in the basement of a home in cold climates. When this threshold is reached, a notification is sent to the user’s smartphone to alert the homeowner to go down to the basement and proactively take action to avoid water pipes from ever freezing.  This helps to avoid the cost and hassle of a burst pipe situation.

IIR: That explains the utility of the device to homeowners; what is the Roost Smart Water and Freeze Detector’s relevance to insurers? How insurers can they use it?

DH: The primary way that insurers will utilize the Roost Smart Water and Freeze Detector will be to provide these devices to their policyholders to install and activate.  If policyholders further agree to share their data with their insurer, then typically they will also receive annual policy discounts.

The net effect is that these policyholders will be, first, more positively inclined to their insurer due to a more “tangible” relationship after receiving product solutions to provide more “peace-of-mind.” Secondly, there is a higher probability that if they have a water leak situation in the future, the claim loss paid by the insurer will be substantially less that it would have been.

IIR: Could you elaborate on how the device supports improvements in loss control or reduction in claims?

DH: The Smart Water and Freeze Detector—as well as the Roost Smart Battery for smoke alarms—significantly impacts the likelihood that if there is a home water or fire peril, with the Roost solution, the early warning notification and mitigation action will reduce the amount of claim losses paid.

In addition, there should be higher customer retention through this proactive engagement including a more positive opinion of their insurer.