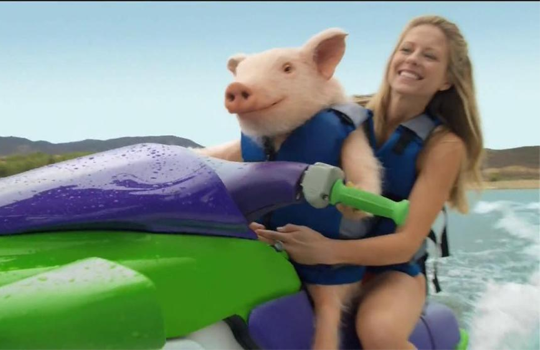 (Still from Geico’s “Maxwell and Ted Have Hail Damage” commercial, embedded below.)

First off, let’s congratulate BBDO New York on their recent appointment as agency of record for American Family Insurance. AmFam spent some $154 million on ads last year and $82 million during the first half of 2014 — all in all, a nice chunk of change. “The Madison, Wisc.-based insurance company said that during the two-month review process it sought a fresh approach to its ‘Inspiring, Protecting and Restoring Dreams’ marketplace positioning that would ‘further differentiate the company from its competitors.’”

Well, BBDO, good luck with that, with that “differentiation” thing.

First off, in the insurance biz at least, it’s really or almost always just a word: Differentiation: Goodness knows, an exceedingly resonant word, sending little chills up and down the spines of CEOs, owners, Boards of Directors; it’s the Holy Grail perennially sought, seldom if ever discovered, but even then held only fleetingly, thence to gradually and quickly dissipate and disappear. It’s what every P&C company, life insurance company, indeed every independent insurance agency seeks but does not in the course of things find — except of course when steered by excellent ad execs and marketers and agencies such as the venerable BBDO New York.

But, still, good luck with that.

Of course, if you worked for New York Life, you knew how very different — differentiated – we were from MetLife. (As, of course, if you worked for MetLife, you knew you weren’t at all like New York Life, except in all the important ways that made us identical in the consuming public’s eyes and enabled our respective execs and worker-bees to shift every few years from one firm to the other and then very often back again.) And if you worked for Prudential? Good Lord, nothing like those guys. Northwestern Mutual? (Gimme a break, Milwaukee?) Guardian? Mass Mutual? Very, very different kinds of companies, so we felt, all the identical “corporate culture,” product, service, and marketing and sales evidence to the contrary. Not to mention the Allstates, State Farms, AmFams, Farmers, et al. And what could be more different from the big peer carriers than independent agencies, whose very livelihood depended on a disdain for the peers’ “captive agents” and, they still devoutly hope, a corresponding differentiating competitive advantage (“we serve clients, not companies”)? There was a time when at least those big peers were indeed somewhat differentiated. Not in terms of product, so much, or practice, so much, but, yes, in advertising image. Decades ago MetLife made the radical decision to adopt Snoopy and his companions — the first insurance avatars? — while Prudential chose to stick by its Rock. (I knew “Get a piece of the Rock” long before I had the slightest idea what insurance or an insurance company was.) And New York Life? They did quite well for a good long time with “Your New York Life Agent: A Good Man to Know in Your Neighborhood.” (Cut them some slack: Consider the times. And the Father in “Father Knows Best,” was modeled on a New York Life agent.)

But, you know, times do change. Mutual Fund investment companies extended stock and bond ownership — a stake in the Market! — to ever-increasing millions of American households. 401(k)s were unleashed to benefits managers who then led the inexorable march to replace defined benefits with defined contributions. Life companies re-discovered the fusty-old annuity and learned the words “retirement” and “retirement plans.” New York Life invented variable life insurance, then disdained to sell such a non-vanilla product, and instead gave new life to the venerable Equitable, among many others. But in time even NYLIC read the writing on the wall and capitulated to the new products — my first boss there was brought in from the field to build the company’s first Annuity operation and, some dozen years later, its first Mutual Funds Department — and the new vocabulary — gee, the very same vocabulary that BBDO will have to work with for AmFam (that “Inspiring, Protecting and Restoring Dreams” tag is not only coincident with the “Life Insurance, Annuities, Mutual Funds” tagline that you see on the last screen of life companies’ TV ads).

But let’s go back to avatars. In the life market, MetLife ran with its power and held on, even when the company got a blimp, even when it got a stadium — though none of its peers, to my knowledge, followed in suit. But, boy, the P&C companies sure did. I’m not a real historian here, but my supposition is that Geico, not then even close to becoming one of the Big Three P&Cs, gave us first the Cavemen, to be followed by maybe a dozen other avatars. Talk about differentiation! So much more distinctive than “You’re in Good Hands” or “Like a Good Neighbor,” which were just so very Prudential- and NYLIC-like, and which consequently didn’t make any sense at all. So instead today we have the dweeb in Khakis and the Cheesehead Quarterback and Mayhem and that actor (not a spokesman but really another avatar) from some cop show and, for goodness sake, Flo in a make-believe insurance shop. So? So what do we have here but well-differentiated TV and print avatars, battling it out of course to lead the count of Facebook’s insurance followers and likes. Social Media aside, it’s kind of the opposite of the latest Android TV campaign: In the insurance space we can Be Together, All Different but really the Same.

Again, the life companies don’t seem to be following the MetLife and P&C avatar approach for now, although why one of them hasn’t appropriated Calvin and Hobbes I’ll never understand. (I’ve got to believe Bill Watterson’s been approached, but he has too much integrity to sell out.) No, while the imagery and setup are a little different — give the ad agencies some credit here — the approach is basically variations on a theme, the theme of, you guessed it, AmFam’s “Inspiring, Protecting and Restoring Dreams” pretend-meme and the vice-president-of-marketing palaver about “spark(ing) a rich conversation with the nation around the power and purpose behind having and pursuing dreams and how we help our customers to achieve their dreams” that inevitably devolves right into “Life Insurance, Annuities, Mutual Funds.” This is variously proffered by a fake professor in Farmers’ case, a real professor in Pru’s case, and cute little family-type vignettes about “Keeping Good Going” from NYLIC, the sloganeer’s mini-version of “spark(ing) a rich conversation….”

And my point is? Well, it surely isn’t that insurance company advertising is all dreadful; some of it is, most is not, and some is pretty good if judged as it should be, as entertainment. (Personally, I remain a fan of Geico’s post-modern, post-ironic campaigns that broadcast we all understand the goal is rake in as much of your money as we can but we’ll do so as nonsensically and fantastically (Words Can Hurt: THE END) as possible. No, my point is that differentiation remains the most important word in the insurance industry, and it remains so precisely because the only way the industry seemingly knows how to differentiate is through advertising, preeminently TV and print. Differentiation is the most important word in the industry because companies believe despite all evidence to the contrary that advertising can differentiate them. Advertising differentiation is the industry’s biggest self-delusion.

Differentiate via product? Nope, by schemes, maybe, but not by product: Switch to us and we’ll save you $500. But the pitch is identical from all the carriers; clearly the actuaries have figured out that this is the optimal price at which we can lure the competition’s customers and carry them for a year before they switch carriers again for another $500 savings. $500 is just the new name for Churn.

Differentiate via service? Well, with the possible exception of USAA, which does seem to have unlocked the secret of maintaining customer trust and loyalty — some secret, one hopes, above and beyond the shameless pandering of their “Thank You” TV commercials — I don’t see any real differentiation here. Tell me if I’m wrong, but what would that service differentiation be? My IVR is better than your IVR?

Differentiation via markets (and true, non-advertising, marketing)? Things are a tiny bit better here: MetLife’s dedication to selling life insurance cheaply, if not for 5 cents; easily, via call center, online, or at a participating Walmart; and whether for Final Expenses or other traditional reasons, seems to be quite sincere and a committed strategy.

I wish I could say the same for NYLIC’s “commitment” to direct online sales, which is indeed a real thing and a big move on the part of a company that previously would not even deign to offer a price quote (“Looking for a Quote? Not at New York Life”). But the commitment here is, if I may lift a phrase from a recent Verizon commercial, still quite “half-fast” (say it fast); you’ll have to do some creative searching to discover that this actually exists on the company Web site — and only there, so far as I know, certainly not in the “Keep Good Going” campaign. (And, just as a footnote, “Keep Good Going” was originally pitched as primarily a Social Media campaign that would also enable content crowdsourcing from an interested customer and prospect base — a true opportunity for that “rich conversation” that’s often mentioned but never transpires; a true opportunity for marketing differentiation — with supplementary TV and print coverage. It ended up as a traditional TV and print campaign, with a Social Media bolt-on, and with crowdsourcing nixed entirely. I leave it to your imagination how this happened.

While it’s way too early to judge the success of MassMutual’s under-the-radar underwriting of a “Society of Grownups” Coffee Shop in Brookline, MA, which offers financial planning to “gain the trust of members of a generation that is scared and/or distrustful of the financial industry” — i.e., Millenials — it sure is innovative and exciting. (How innovative? It’s a page torn out of Chris Locke’s Gonzo Marketing, published back in 2001, that postulated that companies could/would “underwrite” various external endeavors to establish strong personal (i.e., non-traditional advertising) relationships between them and emerging micro-markets in which the companies have a perceived future stake. Millennials kind of fit that bill, huh? Who knew that anybody at MassMutual was reading or thinking like Chris Locke, aka Rage Boy?

If differentiating advertising is the industry’s biggest self-delusion, the industry’s utter failure over decades to perform on its organizing mission — insuring the great mass of citizens — is undoubtedly its biggest secret. I’ve gone on at length both here and here discussing this woeful and threatening situation — woeful and threatening because it could lead in time to the scrapping of life insurance’s differentiating tax privileges — so it’s heartening to see MetLife’s dedication to providing insurance cheaply, NYLIC’s (admittedly half-fast) program of direct online sales and, most excitingly, MassMutual’s truly “out-of-the-box” (to use one of the industry’s favorite observed-more-in-the-breach-than-in-the-practice clichés) Coffee Shop experiment. It’s heartening because these are truly differentiating practices, which, guess what, are really the only way for companies with identical products, identical pricing, identical service capabilities/commitments, identical marketing (i.e., traditional advertising) and an identical market — the 20% of Americans with 80% of the money — to differentiate. You successfully differentiate by what you do, which ultimately defines who you are, and why I should buy from you —not by largely undifferentiated advertising blather on TV.

Still, if one of the life industry’s big peers could somehow corral Calvin and Hobbes, I’d probably pledge allegiance to them…

(Embedded below: Geico’s “Maxwell and Ted Have Hail Damage” commercial.)