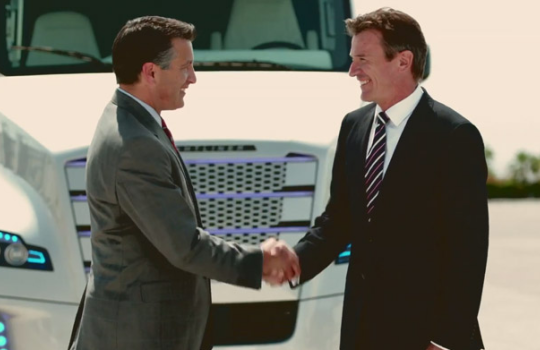 Last week the first autonomous commercial vehicle was given its license plate in a ceremony at Hoover Dam involving Nevada Governor Brian Sandoval and Daimler AG executive Wolfgang Bernhard. The event was a reminder that autonomous vehicle (AV) technology is a very real factor in transportation, and will also become a huge factor in insurance.

How great of an impact will AVs make on insurance? Mike Burn of Silicon Valley consultancy Future Partners makes the following point in a blog with an illustration calculated to amuse insurance industry observers:

The collateral damage from the rise of the self-driving car will be a shrunken insurance market and lower volume throughout its direct and unintended supply chain. Not all insurance carriers will survive, and there will be hurt elsewhere too.

Our featured story in today’s IIR newsletter takes a look at a report from Munich Re which explores specific considerations for personal and commercial lines insurers related to AV technology. The report is full of useful observations about shifts in liability and product. But there’s a deeper subtext about the changing role of insurance in society, and the implications of that change for the customer relationship.

The report mentions the role of the industry-sponsored Insurance Institute for Highway Safety (IIHS) in reducing risks in people’s daily lives. The same thing could also be said for the Institute for Business and Home Safety (IBHS), which currently does work directed at improving the resistance of buildings to various hazards, including wildfire and hail. But this role of insurance has much deeper roots. It is expressed in the founding and mission of Hartford Steam Boiler (HSB), which we discussed recently with CEO Greg Barats. And just as HSB addressed the new technological hazard of steam, Underwriters Laboratories addressed the dangers of electricity.

(Related: Q&A: HSB CEO Greg Barats on the Engineering-Focused Insurer’s investment in the Internet of Things)

Insurers now have an opportunity to renew their role as risk mitigation experts for emerging hazards at the level of research, in the provision of indemnity products and to take a greater role in helping customers to prevent losses, not only in commercial lines but in personal lines as well. We see how that role can take shape specifically in the automotive context in Munich Re’s report, “Autonomous Vehicles: Considerations for Personal and Commercial Lines Insurers,” and in HSB’s investment in start-ups focused on the Internet  of Things with regard to mitigating risks and preventing losses in both the commercial and domestic realms.