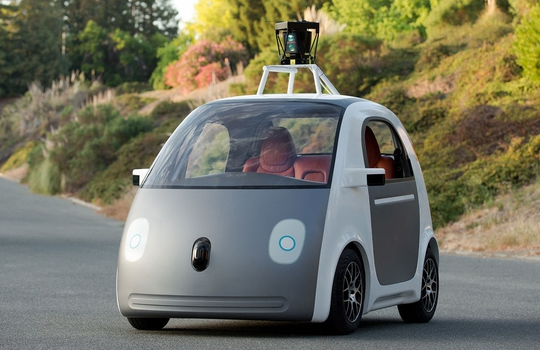 Ridicule and skepticism were among the first reactions provoked by Google’s unveiling of its self-driving car prototype late last week. Certainly, there was plenty of “gee whiz” reaction to the development, but some of the first observers I came across mocked the car for its goofy appearance and limited features and capabilities, e.g., no steering wheel, accelerator or brake pedal; maximum speed of 25 mph. But for both the general public and the insurance industry, the debut was further demonstration of the viability of driverless vehicles as a commercial proposition, and all that implies for how we live – and how we craft and price insurance products.

Google’s official blog made the following points last week to accompany the debut of its prototype:

Ever since we started the Google self-driving car project, we’ve been working toward the goal of vehicles that can shoulder the entire burden of driving. Just imagine: You can take a trip downtown at lunchtime without a 20-minute buffer to find parking. Seniors can keep their freedom even if they can’t keep their car keys. And drunk and distracted driving? History.

But not everybody was equally enthusiastic. A writer at U.K.-based The Register presented a litany of objections to the promise of self-driving vehicles, saying that the innovation is more likely to increase traffic congestion than reduce it, and that autonomous vehicles will fail because of technical and other limitations: driverless cars will wait too long when lights change to green, their sensors won’t work in bad weather, their GPS will fail in tunnels, and they simply won’t appeal to people who like to drive.

To the extent that these are reasonable (and accurate) objections they merely articulate challenges yet to be fully addressed. It’s easy to imagine an article written 10 years ago explaining in similar fashion why Google’s current prototype could never work. Commentators often project from current understanding, failing to anticipate the synergies of cumulative advances interacting with each other. In the age of the mimeograph, it was clear that the interpretation of text was beyond the power of machines. Then came character recognition, followed by handwritten character recognition, automated semantic analysis and even voice tone interpretation. Human processes are complex, but technology can be built up to substitute for them with the added value of eliminating human error –  a key part of Google’s sales pitch.

The fact is that humans probably delay more at green lights than machines will; humans also struggle with the optical challenges of fog and rain – just as they often struggle at reading other people’s writing. Some onboard navigation systems already cope with temporary GPS outages, such as those caused by tunnel walls, compensating via mapping technology and sensors. It’s not hard to imagine wifi being introduced into more places currently without reception, such as parking garages, as demand rises.

The most compelling objection, at least for some of us, may be the desire to retain one’s own autonomy as a driver. Many people – many Americans especially – like to drive. And many like to go off-road for a variety of purposes, such as hunting, hiking, camping or just for the pleasure of driving on rugged surfaces. But even for them, a self-driving vehicle may come in handy. Getting a taxi downtown to have a couple of beers can be expensive, but driving oneself increases safety and legal risks. People who own a car with self-driving capability could drive themselves there and have their car drive them back. Alternatively, driverless taxis would be significantly cheaper (more on that below).

Self-driving vehicles could be dispatched by owners to run errands. Today many supermarkets offer delivery services at a nominal fee. In the future, they may create docking zones for pilotless vehicles collecting orders. By doing so they would reduce their infrastructure costs much in the same way a company would by allowing workers to use their personal computing devices.

As noted above, observers tend to underestimate the potential of technology by failing to understand how it evolves geometrically rather than in linear fashion; they fail similarly by assuming today’s cultural attitudes, and thereby underestimating how technology shapes the way people live. In the 1970s, someone could be forgiven for questioning the idea of universal personal computing – “I mean, what on earth are they going to compute?”

In a similar respect, it’s a mistake to understand Google’s self-driving vehicles as simply a new kind of car. What Google is pushing is a paradigm shift from car as a useful personal possession to transportation as a service. As John Naughton of The Guardian  notes that Google’s engineers are saying,

…why don’t we stop thinking of cars as possessions and start thinking of them as services? We all feel the need to own and operate our own cars because taxis are expensive, buses are unreliable and your car is available whenever you need it. But what if urban areas were flooded with Google’s autonomous pods, each capable of being whistled up in an instant, using a smartphone which can detect the one nearest to you? It could pick you up and deliver you safely to your destination. And do so much more cheaply than any human-driven vehicle.

Naughton also notes that Google has invested in in Uber, a service that lets you find a car via a smartpoine app. “Said cars are currently driven by humans, but… well, you get the point,” he says.

Nor is Google alone in seeing the opportunity. Nine car manufacturers, including GM, Honda, Audi BMW and Hyundai exhibited driverless car prototypes at this year’s Consumer Electronics Show, as the Post Online reported. The Feb. 4, 2014 article reported that auto industry consultants IHS Automotive predicted that driverless cars will account for 9% of global car sales by the mid-2030s.

The article noted the prediction of Donald Light, director of Celent’s Americas Property/Casualty Practice, that insurance premiums could drop by up to 60 percent by the middle of the 2020s, and noted:

The implications for the insurance industry are profound. For most insurers, it is not a case of ‘if’ driverless vehicles will turn the market on its head, but ‘how quickly’? “I view the anti-collision technologies and driverless cars as far more groundbreaking than telematics”, says Mike Brockman, chief executive of specialist telematics insurer Insure The Box. “I have been in the motor insurance market for 33 years, but within the next 33 years insurance might not exist in its current form. The thought processes just aren’t in place to understand the impact this is going to have,” he continues.

Gurpreet Johal, lead actuarial and analytics partner at Deloitte, feels the tipping point for the market will come even sooner: “The motor insurance industry as we know it today won’t be there in 25 years time – it may even disappear sooner, because the rate of technological change constantly wrongfoots the experts. Just look at the growth and development of smartphones. Every prediction over the last decade has turned out to be wrong,” he says.

As The Guardian’s Naughton reports, Google’s fleet of cars have driven over 500,000 miles on California roads and the only instance of an accident was when a car was piloted by a human. The implications for insurance claims are obvious, without even bringing up the fact that digitally managed – and documented – driving makes auto insurance fraud a much more difficult proposition.

Another writer questions whether the safety contrast between human and automated driving could create a moral imperative – and potentially a legal one – to leave driving to the robots:

Within two or three decades the difference between automated driving and human driving will be so great you may not be legally allowed to drive your own car, and even if you are allowed, it would be immoral of you to drive, because the risk of you hurting yourself or another person will be far greater than if you allowed a machine to do the work.

Whether such a concept could increase social pressure against driving your own car sometime in the future is realistic, there is already economic pressure to consider the benefits of introducing technology into one’s insurance budgeting. Telematics still only accounts for about 2 percent of auto insurance, but insurance carriers are feverishly exploring ways to offer the service as a means of attracting lower-risk customers. Collision avoidance is showing great promise for the near future, and self-driving vehicles are on the foreseeable horizon.

Consumers have already crossed the Rubicon when it comes to exchanging private information for value. It’s far from inconceivable seeing them extending that principle to share not only auto telematics but other kinds of telemetry, such as for household risks, to further reduce premium. And in the case of self-driving cars, information exchange may combine with the concept of transportation-as-a-service to make self-driving vehicles more appealing for a variety of purposes in the not-too-distant future. Insurers need to start planning now to design insurance products and develop pricing for those purposes.