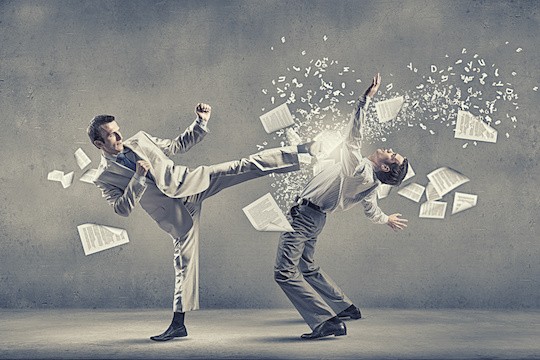 (The customer should have read the fine print. Image credit: Adobe Stock.)

Is there anybody left who has not seen the video of the United Airlines passenger, being dragged from his seat? The airline’s CEO defended United employees, saying that they were following proper procedures, and United defenders on social media have been alluding to the terms of the contract: “You need to read the fine print when you buy your ticket.” I imagine an insurance company representative making the same point to inform a person that, no, they are not actually covered for that loss—and doing the same harm to their company’s brand.

At the end of the day, what the public sees is that a customer was denied what he paid for because of the ethically questionable practice of overbooking. Not only that, but the airline was bumping passengers to accommodate its own employees. Random selection of passengers is no doubt the fairest way to solve the problem, but this should be done before passengers board—why was it not? Also, it doesn’t help that the passenger was a middle-aged doctor pleading that his patients needed him. The United passenger was probably foolish to resist as stubbornly as he did, but United’s personnel were even more foolish to insist. The prevailing impression is of airline dragging a bloodied passenger—who had done no wrong—literally kicking and screaming, from his seat.

There’s blame to go around. People complain about poor service, from both airlines and personal lines insurance carriers, but they still make their purchasing decisions based on the lowest cost. Companies are driven to compete on price, which requires ever-increasing efficiency measures, which in turn erode service. Airline customers delude themselves about what their fare entitles them to, and insurance customers similarly delude themselves about the real economic value of their premium. But when the moment of truth arrives, the customer is always right, and it is the company’s brand that suffers. In the case of United, Market Watch predicted this morning that a dropping stock value could wipe $1 billion off United’s ledger.

Learning to Live with a Bad Reputation

Like the airlines—and used car salesmen—the insurance industry has learned to live with a bad reputation. But can nothing be done? Does insurance imply a fundamental conflict of interest between insurer and claimant? Possibly. But can that conflict not be mitigated?

Startup insurer Lemonade has taken an approach based in behavioral science to address the moral hazards associated with the traditional insurance contract. The company charges a flat fee, and any money left over after claims goes to a charity of the policyholder’s choice. The jury is still out on how well that model will work, and how far it might scale across different types of customers. But might it be that insurers generally could do more to introduce greater transparency into their customer communications, making it clearer what is and is not covered for a given policyholder?

In recent years Allstate has undertaken an advertisement campaign essentially cautioning consumers that, with car insurance as with other things, you get what you pay for. That’s a step in the right direction. Perhaps technology also presents an opportunity to create a better customer interface, with tools that demonstrate clearly what will or won’t be covered by what type of policy or what amount of premium paid.

Regaining Sight of the Social Good of Insurance

Insurance is a social good, an important mechanism of risk management and, in turn, of economic stabilization. That social value was probably clearer to policyholders participating in mutual fire associations than it is to customers moved by mass advertising to choose the coolest and cheapest car insurance. Can a more honest customer relationship be reached on a mass-consumption level? Does this problem represent a special opportunity for regional mutual insurers?

Customers will continue to wish to spend less money—especially for a product they are forced to buy by law—and will engage in self-interested special pleading in favor of what they’re getting for it. And insurers will compete on price, knowing that customers will believe they’re getting more than what they’re paying for. But does the industry need to continue to operate on a principle of “there’s one born every minute”—and the ultimate disappointment and resentment that implies in the case of claims? Are insurers content that, at some moment, they’re going to be metaphorically dragging their customers, bloodied and humiliated, off the plane?