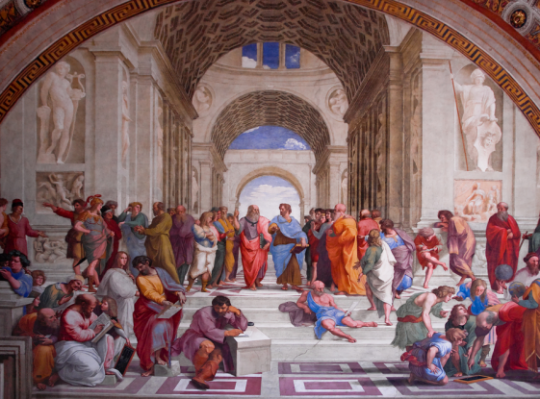 (Detail from The School of Athens, by Raphael, 1511, Vatican City.)

Much has been written about what it means to be an effective CIO in the 21st century. Industry observers frequently highlight technology expertise, financial acumen and portfolio management strength among the desired qualities, and rightfully so. But while these technical abilities are no doubt important aspects of CIO competence, the abilities that make for greatness in a CIO are those developed from an education in liberal arts.

There’s a tendency to think that a person is either logical, analytical and objective or intuitive, thoughtful and subjective. It’s the left/right theory of brain lateralization. I’ve always regarded that theory doubtfully, thinking it more akin to the simplifications of pop psychology than reliable neuroscience. And my career has tended to bear out that skepticism: I have been a practicing technologist since 1981, including 13 years as a P&C insurance CIO. During that time, I’ve done just about everything one can do in IT, from mainframe operator and systems programmer, to network administrator and application developer, to middle and executive management. However, I also have a PhD in European history, I teach at the university level and I’m a hobbyist musician and painter. Hans Holbein’s The Ambassadors, 1533, in London’s National Gallery. Men of affairs with the tools of learning that prepared them for their responsibilities.

While these qualities didn’t necessarily make me either a good or a bad CIO—I’ll leave it to others to judge—I would argue that my best moments as a CIO drew directly from my liberal arts background rather than my technology training. A little reflection will show that’s not as counterintuitive as it may seem at first glance. If you were to list the characteristics of a great CIO, you probably would not list technical competence, software or product expertise, development language excellence, enterprise architecture or even strong financial management—all though all of these things are useful.

More likely you would—or at least should—list things such as critical thinking, excellent reading and writing skills, effective communication, organizational ability, good listening skills and strong emotional intelligence skills such as empathy and the ability to see situations from the perspectives of others. Any company would be fortunate to have a CIO with such skills, and they are more likely to find them in a someone with a liberal arts background than someone who majored in computer science, engineering or some other technical discipline.

The Most Curious Person in the Room

Let’s match those skills to real-life examples. What is it that CIOs do that makes them great, as measured by the value they bring to their organizations? Long gone are the days when being the CIO meant being the best technician in the building. Today’s great CIOs demonstrate perennial leadership qualities: the best ones are able to influence others without being overbearing or egotistical; they’re able to paint pictures and tell stories at the executive and board levels that provide a cogent framework for strategic action; they are able to motivate large groups of people to set aside their smaller differences and pull in the same direction toward a common goal; they are self-aware and self-critical, allowing them to reassess their own positions when necessary, and without needing to be forced by others; and while they may not be the smartest technical person in the room, they may well be the most curious person in the room because they’re life-long learners with the humility to surround themselves with the kind of people they can learn from.

What do organizations get from such leaders? In short, they gain the effective use of IT resources for the long-term benefit of the company. They gain an integrated view of the value that well-applied technology can have on their specific business domains. They gain a forward-leaning IT organization that looks for, recognizes and then leverages opportunities to continuously improve business processes, and therefore profitability and customer service. They gain drama-free business and IT initiatives where all involved actually do what they say they are going to do, when they say they are going to do it. And they gain all this and more because they have a CIO who understands that the best way to get things done is, more often than not, by helping others believe that what needs to be done is actually their idea.

Leadership and Morale in Human Endeavors

The business IT landscape is littered with failed initiatives that cost companies lots of money, resources and time as well as lost opportunities. Why does this happen so often? It can’t just because the software is subpar (it happens) or that the vendor was less than perfectly candid (also happens), because those are problems that the market would have corrected over time. So it must be something else. Perhaps it’s some combination of factors, such as poor communication, bad technology choices, unmotivated teams and a lack of imagination.

In the end, while technical expertise is a baseline necessity for successful technology projects, any team initiative is a human endeavor that combines rational and irrational human processes and which is a moral endeavor as much as a technical one. Understanding how to marshal human qualities to an end and to channel energy into a direction that increases morale is a human endeavor and one for which people who have studied the humanities are often better prepared to undertake.