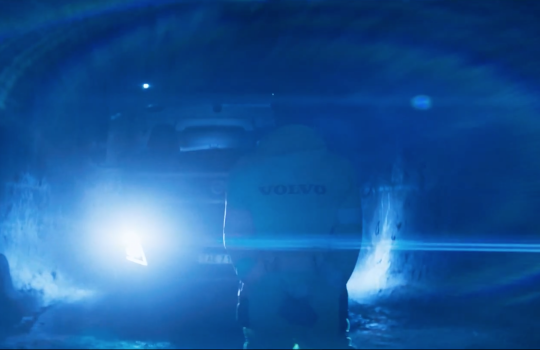 Volvo reports that it has tested its fully autonomous truck in operations deep underground in Sweden’s Kristineberg Mine as part of a development project aimed at improving the transport flow and safety in the mine. During its ongoing mission, the truck will cover a distance of seven kilometers, reaching 1,320 meters underground in the narrow mine tunnels. “This is the world’s first fully self-driving truck to operate under such tough conditions. It is a true challenge to ensure that everything works meticulously more than 1300 metres underground,” says Torbjörn Holmström, member of the Volvo Group Executive Board and Volvo Group CTO.

The truck uses sensors to monitor its surroundings and avoid both fixed and moving obstacles. While operating, the vehicle’s on-board transport system gathers data to optimize and coordinate route and fuel consumption.

Volvo’s Holmström demonstrated his confidence in the truck’s capabilities by standing in the truck’s path in the mine. “No matter what type of vehicle we develop, safety is always our primary concern and this also applies to self-driving vehicles,” he comments. “I was convinced the truck would stop, but naturally I felt a knot in my stomach until the truck applied its brakes!” The immediate goal of the project is to build experience with self-driving trucks, according to Johan Tofeldt, Volvos’s Group Project Leader, Automation. “Our long term goal is to leave the mine into construction sides, above ground and ultimately on public roads,” he comments. “We have built a system that will be easily adapted to places other than underground mines—we are building a technology platform more than a specific functionality solution.”

The project involves the commissioning of one truck within a commercial mining operation, according to Anders Kelström, Volvo Group Automation spokesman. “Even though it’s a research project, it will do an actual job in the mine,” he notes. “I would say that automation starts with safety, so our active safety systems are really those building blocks that we are currently developing and introducing that will be the foundation for the higher degrees of automation in a later stage,” Kelström adds.