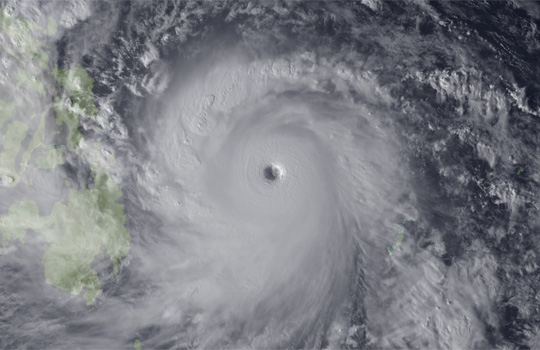 Typhoon Haiyan, a Category 5 cyclone that made landfall in the Philippines on Nov. 7, ranks as one of the most severe storms of its kind ever recorded in terms of both its meteorological attributes and its human impact. Economically the storm was also a significant event, but the low incidence of property insurance in the Philippines means that insurance losses are disproportionately low. However, insurers have helped in ways other than claim response.

The exact intensity of Haiyan at landfall has not been determined, but if reported wind speeds of 195 mph prevailed at landfall, it will have been the strongest recorded tropical cyclone to make a landfall, beating the old record of 190 mph set by Atlantic Hurricane Camille in 1969. The Joint Typhoon Warning Center (JTWC ) estimated Haiyen’s one-minute sustained winds at 195 mph at 6:00 p.m. UTC on Nov. 7.

The death toll associated with Haiyan continues to be updated, the latest official figure being 2357, according to the International Business Times (IBT). The figure would make Haiyen the second deadliest storm on record to hit the Philippines, which the 2012 World Disaster Report characterized as the third most disaster-prone country in the world. The IBT reports that the number of injured is at 3891, and the number of missing at 77.

Catastrophe modeler AIR Worldwide reports  that an estimated 650,000 people have been displaced in the Philippines, with the Islands of Leyte, Samar (where landfall occurred) and northern Cebu being the worst affected.

A.M. Best published a preliminary estimate of total economic losses at USD 14 billion and insured losses at USD 2 billion, but cautioned that it is too early to calculate any reliable figures for the event. While Haiyan was possibly the strongest tropical cyclone ever recorded, A.M. Best does not expect any major rating impact on insurers.

The effects of Haiyen have provoked a discussion about how to increase covereage in the Philippines. The Manila Standard  reports on the development  of typhoon coverage aimed at helping Filipino farmers with affordable indemnity policies. International Finance Corp., a division of the World Bank Group, has teamed up with the Center for Agriculture and Rural Development Insurance Agency and Philippines-based Pioneer Insurance and Surety Corp. to create these new products. Proponents say that an index-based approach will facilitate quicker payouts after future weather-related disasters. Such a system would consider a variety of factors such as rainfall levels and wind speeds to create early estimates of losses.

Other insurers are assisting through charitable channels. Philadelphia Insurance Companies (Bala Cynwyd, Pa.) is donating $70,000 to the American Red Cross for relief after Typhoon Haiyan. Hartford-based Aetna is making its international employee assistance program available to all global members and is extending the deadlines for filing claims and appeals by members who have been impacted. Additionally, the Aetna Foundation is matching employee donations dollar-for-dollar for disaster relief.

“Our thoughts are with those who have been affected by this devastating storm,” comments Richard di Benedetto, president of Aetna International, the company’s global health care benefits business focused on products for expatriates. “We want to help our customers get the care and medications they need, understanding that many may be experiencing enormous disruption caused by damage to their homes, health infrastructure and transport.

“Our Member Services Team in Manila is on-hand to help and our operations are working normally,” says di Benedetto. “We are grateful that our team members in the region are safe and accounted for.”

(NOAA radar image of Typhoon Haiyan as it struck the Philippines.)