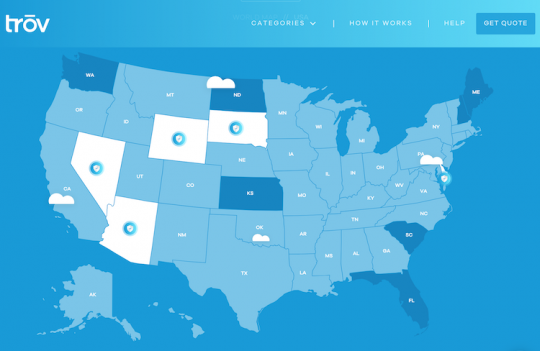 Trov, the Danville, Calif.-based online platform designed to let consumers insure single items, announced this morning that it is launching its on-demand insurance platform in four more U.S. states. Residents of Nevada, Delaware, South Dakota, and Wyoming will now be able to secure on-demand insurance for items such as laptops, cell phones or guitars. Trov announced the launch of its platform for Arizona in July 2018.

Trov launched in the United Kingdom and Australia in 2016 and has obtained regulatory approval for all U.S. states except Maine, New Hampshire, South Carolina, Florida, North Dakota, Kansas and Washington.

Trov users are able to turn coverage on or off anytime with a swipe in the company’s mobile app, enabling them to pay only for the coverage they need. Trov’s Smart Premiums adjust each month based on the market value of the item as time goes on.