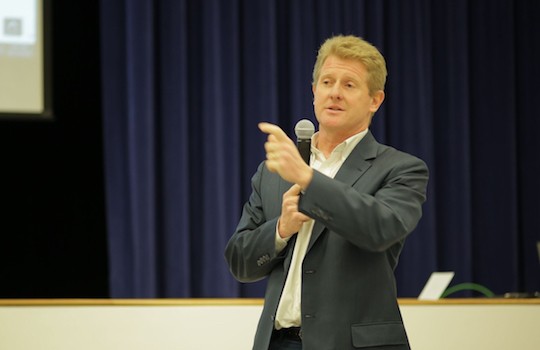 Insurers’ should perhaps be less anxious about their industry’s future, since it’s only likely to get larger, suggested Bob Cummings, SAP’s Global Head of Insurance, at the recent SAP Digital Insurance Innovation Summit. However, while the insurance industry will grow, it will become increasingly invisible, according to Cummings.

“We’re facing a completely different environment as far as innovation is concerned,” began his remarks. He then related a recent conversation with his son reflecting on the role of technology innovation as it would shape the life of his niece’s newborn daughter by the time she was in her early 20s.

“My older son said, ‘What do you think your business—insurance—will be like when she’s my age?’” Cummings responded: “There will be a lot of changes. She might not even know what insurance is. Unless she works in the industry.”

Insurance won’t go away, Cummings clarified to his son; in fact, he predicted, more risks would be identified and covered in the future. What would change is that insurance products will be increasingly embedded in situational and life-stage contexts rather than being bought and sold explicitly as they have been traditionally.

Cummings traced a vision of the future where the integration of data and communications with lifestyle would result in insurance coverage becoming available with the offer of unrelated products and services through novel distribution partnerships. He offered the hypothetical example of his grown-up grand-niece buying her first home.

“She’ll move into a home and think about protection—from burglary, accidental flooding, carbon-monoxide poisoning—so she might go onto this website, company called ADT,” Cummings said, sharing the company’s website on screen with the audience.

The Future is Now

After becoming a client with the home security firm, Cummings’ niece would have an app to monitor her home and control appliances remotely. “And the company at that time will probably say to her, ‘We’re so convinced about our burglary protection that if you do get burgled we’ll pay you up to $200,000 for losses you might have,’” Cummings said. “The RFID tags and batteries will be so advanced that there will even be theft protection for where her things go.”

The scenario for his grand-niece was hardly far-fetched, because the offer he described already existed through a partnership between ADT and State Farm Insurance. Cummings also demonstrated through a video shared with the audience how new insurance company Tr­­­ōv currently allows individuals to protect their valuables by turning coverage on and off, as the need arises, through a mobile app.