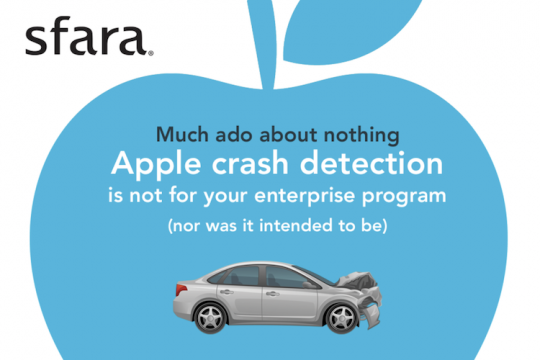 We’ve seen a lot of negative postings about the newly released Apple crash-detection service. We think that negativity is overwrought and misplaced. Apple did not intend to re-define crash detection, and certainly did not intend for the service to be used for enterprise business. Therefore, they can’t be held accountable for those expectations.

Most likely, Apple was only trying to provide a life-saving service to some of its consumers, because it could with their new devices. If Apple knew they could save a few lives, they’d be irresponsible not to do so.

But they didn’t set out to conquer the world of crash detection services. Out of the gate, they proclaimed clearly that they were detecting only severe crashes—and wouldn’t detect all of them. They should be lauded for their efforts to save the lives that they can save and for raising the profile of smartphone-based crash detection.

Why is the industry so worked up?
When the Wall Street Journal wrote about the impending release of Apple’s crash detection last year, interested industries expected it to be big, groundbreaking, exciting and completely innovative. Their severe crash detection was not designed to be any of these things. The methodology they use in their crash detection is today easily achieved through imitation. It’s a commodity technology in use for over five years by relevant industries. But it cannot live up to the expectations and potential of a more sophisticated, re-invented approach.

All Apple said it was going to do was introduce severe crash detection into their latest devices. The rest of the expectations and hype came from within industries desperately in need of a solution.

So, no one can blame Apple for not meeting the expectation that it would solve problems it didn’t set out to solve.

What kind of crash detection technology does an enterprise need?
A successful enterprise program requires a relatively ubiquitous technology (available everywhere), which means smartphones (with 5B+ already in the hands of consumers) and a low service cost so that it can be essentially given away to achieve adoption. Plus, the ability to detect accidents at low speeds (with minimal false positives), and account for all the specific and rigorous needs of an enterprise program.

Are there solutions out there that solve for the three major problems highlighted above?
Sure. But based on our testing, and the testing of third parties looking to select a solution from amongst the industry’s top players, we’re aware of only one that solves for all three. That would be Sfara. Our exclusive ultra low-speed crash detections make us the only company that solves for all three enterprise needs.

Thanks again, Apple
Again, let’s reiterate that Apple did not intend for its crash detection to be used for enterprise purposes. We should thank them for raising the awareness of crash detection services and highlighting just how badly a great solution is needed in the market.

But don’t blame Apple for attempting to replicate the hard work and heavy investment already expended by a few specialized companies. Apple didn’t try to take a big bite out of the industry, it was only nibbling at its skin. Let’s not continue blowing this situation out of proportion. Once all is said and done, this has been much ado about nothing.

And hey, Apple, if you’re listening, if you decide to get into the enterprise crash detection business, we’ll be right here to talk.