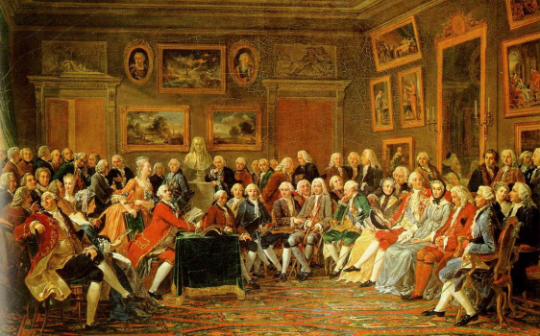 (A reading in the salon of Madame Geoffrin in 1755, by Anicet Charles Gabriel Lemonnier. Chateau de Malmasion, France.)

The twenty first century has been challenging for the insurance industry. Disruption has replaced the status quo as new technologies emerge and customer expectations shift. The industry is forced to change with the times or risk losing the one thing it can’t afford to lose: relevance in peoples’ lives.

While it is difficult to know how to proceed, historical parallels can provide some guidance. The French Enlightenment of the eighteenth century and the salons that fueled it questioned existing notions and paved a new way forward for European civilization. The open discourse of salons allowed the French Enlightenment to take shape, and they offer valuable lessons for modern insurers. The impact of salons  was felt even as their necessity was lost at the start of the French Revolution. Their lessons persist, especially around idea generation, critique, and community. As disruption continues and new challenges confront insurers, an eye toward the past can help organizations move forward.