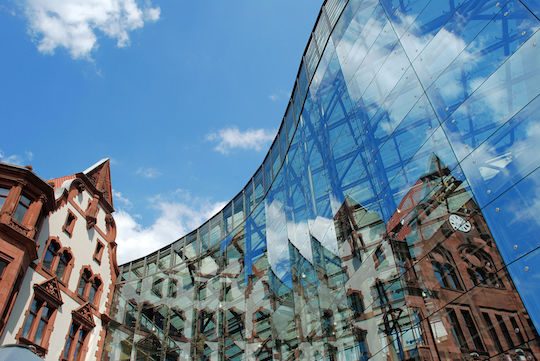 (Allianz is collaborating in a smart city partnership with the city of Dortmund. Photo credit:Aleksandr Ostrovskij.)

The insurance industry’s discussion about the Internet of Things (IoT) has tended to focus most on “smart” cars and homes, but a report from research and advisory firm SMA (Boston) reminds us of the potentially enormous impact on the insurance of smart cities. While thoroughly smart cities may be decades away, early initiatives are underway even in modest-sized cities and as the trend proceeds, it could have important implications for insurers, including significant risk reduction in many categories. However, it will likely also bring increases in cyber risk and other exposures related to the smart city technologies themselves.

According to the report, authored by SMA partner Mark Breading, “a smart city is one that is proactively leveraging connected world technologies to gather, analyze, and act upon real-time data to improve the lives of citizens, enhance mobility; create safer environments; optimize energy consumption and waste management; and contribute to the urban center of the future.”

Within this definition, among the more obvious uses one might imagine are how smart homes might be connected to a larger municipal system offering information about anything from storm warnings to delivery services; or a smart car that communicates with a city’s traffic infrastructure, including signals, safety alerts, congestion information and recommendations for alternate routes. However, the SMA report examines a wide range other possibilities, many already in flight.

“People tend not to realize how much the smart cities trend is already happening,” comments Breading. “Smart cities will serve as a catalyst for a connected world, creating ripples that will reach suburban and rural areas. Cities have scale and resources to tackle problems, and the technology already there—this is not sci-fi.”

While many smart city initiatives are directed at creating a more livable environment, gaining operating efficiencies or reshaping an urban center to attract employers and tourists, one of the greatest benefits of smart city technology will be the potential to reduce a wide range of risks, Breading stresses.

The phenomenon of a thoroughly intelligent city is some distance into the future, Breading acknowledges.  In the current early stages, smart city initiatives remain piecemeal, involving what might be called point solutions, many within the areas of mobility and public safety. Other areas identified by SMA include sustainability, lifestyle and citizen well-being (see illustration above story).

London is investing £4 billion in “smart” efforts to address traffic congestion, among other initiatives, and smaller cities around the world are ramping up smart cities initiatives as well, according to Breading. For example, Columbus, Ohio won a U.S. Dept. of Transportation Smart City Challenge, receiving $40 million to launch autonomous vehicle pilots designed to increase accessibility for the disabled in need of healthcare and other services.

Other cities covered by the SMA report include Dubai, which is creating a city-wide platform and including smart taxis and promoting blockchain initiatives; Eindhoven, Netherlands, which is building a smart lighting grid; and Wellington, New Zealand, has undertaken a water quality monitoring initiative that involves real-time data from sensors in the city’s harbor and the Hutt River, which feeds it. Amsterdam has driven over 80 smart city pilot projects.

The net effect of smart cities will be to reduce a wide range of risks. One reason this is important to insurers is the trend of population to cities: SMA reports that urbanization of world population may reach 70 percent by midcentury. The upshot is that an increasing proportion of individual and business customers will live in a smart city environment. The nature of smart technologies of any kind is to produce information and awareness of things that would otherwise be unknown or unseen. The key technologies SMA identifies are the IoT generally, autonomous vehicles, drones, wearables and geospatial technology.

“Mobility related smart city technology could have a huge impact on both personal and commercial auto, both in terms of safety and the number of people who own vehicles,” Breading says. “Landlords and business owners will be able to manage utilities better and be able to avoid or mitigate losses when something goes wrong.”

In the public safety arena, smart city technology can analyze general safety risks to residents and pedestrians, and also reduce violent crime—such as smart street lights that turn on when they detect a person in a given area. “These have already been proven to reduce attacks on people,” Breading says. “Applications may raise concerns—such as the issues of a surveillance state—but from an insurance perspective, there is great potential to reduce risk across all lines of business.”

Several major insurers are already involved in smart city initiatives. SMA reports on several insurers with important smart cities initiatives, such as AXA’s partnership in the CityMakers organization focused on smart city plans for its headquarter city of Paris; through work in its internal innovation labs, XL Catlin (Hamilton, Bermuda) has adopted the strategic attitude that smart communities will have distinct property and liability insurance needs—particularly in the area of cybersecurity; and Allianz (Munich) is collaborating in a smart city partnership with the city of Dortmund.

Breading recommends a range of steps insurers should take, including tracking the emerging technology that will power smart cities, and investing in big data and analytics in general. He also advises that insurers follow AXA’s example engage with their headquarters cities where they have major customer populations. Opportunity isn’t lacking for most insurers in this regard, he suggests. “Cities of various sizes are trying to put together smart city plans, some being along the lines of a couple of simple projects, others more visionary, looking ahead 10 or 20 years,” he says. “Insurers should engage, be supportive, and contribute their insight into risk.”

Botnet DDoS Attacks: A Snake in the Insurance IoT Grass