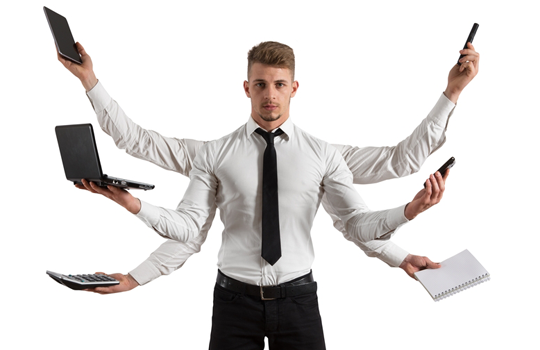 I attended a client meeting recently where the CEO was unveiling his plans for the next 12 months. When I arrived in the room, the large boardroom was full of laptops and mobile phones, and most attendees were busily typing away on at least one device. As the meeting kicked off, the team continued to work on laptops while supposedly listening to the CEO elaborate on what would impact their lives and the company in the coming months.

This was normal and accepted behavior for this team. I can only guess that what they thought they gained from multitasking was to be seen as important, busy and productive employees. The truth – as played out in the discussion of the CEOs plans – was a disconnected group who missed key points of the presentation. From where I sat, it defeated the purpose of the meeting.

Juggling or multi-tasking is prevalent in all areas of our lives. We cook whilst on the phone and keeping an eye of the child’s homework. We text whilst we drive. We respond to emails in meetings. We work on our laptops whilst watching TV. A friend mows the lawn whilst on conference calls (he does use mute).

Yet multi-tasking for us mere mortals is a myth.

In a Stanford University study on media multitasking found that high media multitaskers were “suckers for irrelevancy.” The study showed that the frequent multitaskers had poorer recall and were easily distracted. As noted by Wagner, an associate professor of the research:

“When they’re in situations where there are multiple sources of information coming from the external world or emerging out of memory, they’re not able to filter out what’s not relevant to their current goal. That failure to filter means they’re slowed down by that irrelevant information.”

Neuroimaging studies in which participants switch between one task and another have implicated several regions of the frontal cortex as bottlenecks to the processing of information. It is emerging that multitasking places excessive demands on executive control centers in the frontal lobe. Hence, multitasking is counterproductive. Not only does completion of all the tasks take longer than if they were performed one at a time, but performance on all tasks is also impaired

As put so succinctly by Gary Keller – “Juggling is an illusion… In reality, the balls are being independently caught and thrown in rapid succession… It is actually task switching.”

So the cost of multitasking is high. It takes more time to get the tasks completed if you switch between them than if you completed them one at a time. You make more errors switching. While time lost in switching on one task is sub-seconds, the cumulative effect in a day is a significant hit on productivity.

My issue with multitasking extends beyond the sheer inefficacy of the method. We have elevated multitasking to a super power at both work and home. We believe it’s a skill that should be mastered in order to be on top of the crazy lives we live. We multitask and feel important and busy. We miss out on human connections that are in front of us, feel exhausted at the end of the day and overwhelmed by the things we need to get done. And in doing so, conflate busy with productive.

Make the choice. Changing habits requires an acknowledgement that we get something from the current habit. There is some benefit to us – however perverse it make seem. Multi-tasking for most of us makes us feel we are getting on top of things. Perhaps there is a sense of being important. You need to reflect on what the costs are to you and do the cost benefit analysis. Only when you can see that costs outweigh the benefits, will you be able to make the choice to stop multi-tasking.

Bring back batch processing. Process your tasks in batches – literally. One approach that works well is to define your 3-5 most important tasks of the day. Each task is 1-3 hours of work. This task could be a staff meeting, time to develop the interim budget, or a cook dinner. And only do that in that moment.

Digital Detox. Our devices in our lives are a distraction that feed into the need to multitask by way of response. Introduce a digital ban in team meetings. Leave the mobile device at home. Turn off notifications on Facebook, Instagram and Watsapp. Follow a mobile-face-down rule at the dinner table with family or colleagues.

Manage expectations. If you choose to change your habits, you may experience some push back from people who are used to you answering emails in less than 20 minutes. Unless you are managing an A&E room in a hospital, or it’s the go-live weekend on your core system replacement program, there are fewer reasons than you think to be available 24×7.

Do one thing at a time, with your full focus and attention and bask in the notion that this really is the most effective way to get things done.

By doing less, you will accomplish more.