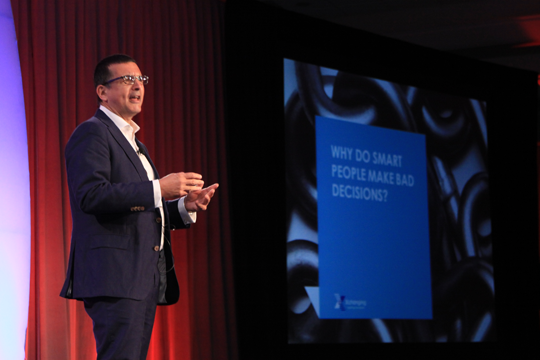 Why smart people make bad decisions is not, strictly speaking, an insurance-specific topic. But it’s a highly relevant question to ponder at a time of great change in the industry. Thus, it was an astute choice of topic for Max Pell, managing director, Xchanging Insurance Services, in his address to the general session of the ACORD Implementation Forum, held last week at the Harbor Beach Marriot in Fort Lauderdale, Fla. Insurers are on the verge of embarking on strategic departures, and Pell offered criteria for asking how decisions can go wrong.

The kinds of decisions Pell referred to were not, he clarified, the “normal” ones of hiring the wrong associate or launching the wrong product. “I’m talking about the catastrophic decisions that bring companies to their knees and cost millions if not billions of dollars,” he stressed.

Pell qualified “bad” decisions as those that could, given the right criteria, be defined in advance of their results. The reason is that a good decision cannot guarantee a good outcome. All decisions are made under uncertainty, Pell said, quoting Ward Edwards. A decision is therefore a bet, and evaluating it as good or not must depend on the stakes and the odds, not on the outcome.

“I think there’s a difference between a good and bad decision that you can discern at the time of the decision,” Pell elaborated. “You go back and scratch your head as to how somebody could have made it.”

For example, in 2010, Research in Motion’s leadership was charged with turning the company around as its BlackBerry devices lost ground to Apple’s iPhone and other competitors, Pell related. The BlackBerry was recognized as a good email platform and a very secure device, but its apps were poor its browser experience was terrible and its touch screen was unimpressive. The single, “glaringly obvious” differentiator the BlackBerry possessed was its user-friendly keypad, according to Pell. “Those were the facts you had as senior management,” Pell declared. “Where should you place your bets, on the device’s strengths or weaknesses?”

Research in Motion’s management’s decision was to drop the one differentiator and create a phone that looked like any other. The result was that a company that had 20 percent market share in hand-held devices in 2008 now has less than 1 percent.

Pell offered a similarly predictable fiasco in the decision of U.K. banks to write a large volume of “self-certificating” mortgages where the recipient was entirely responsible for reporting his or her income, without any due diligence to verify on the part of the lender.

“Place yourself on the management team or board of those organizations,” Pell said. “You would know that 50 percent of your business is going to people you have no idea can service the loan. That would only make sense if house prices are going up. And yet, in the past 25 years, house prices fell by 20 percent and stayed low for a long time.”

These examples show differences between good and bad decisions that do not require waiting for the outcome, Pell stressed. A bad decision, he submitted, was one made where chances of achieving the desired outcome was low due to poor information, planning or execution, and where that was evident when the decision was made.

“You can have all the mission statements in the world, but what really drives behaviors in organizations is which behaviors are rewarded and which are punished,” he added.

Illustrating the power of Conformity to drive bad decisions, Pell cited Solomon Ash’s “normative social influence” experiments, conducted in the 1970s. Ash’s research showed that people would go along with a group decision 37 percent of the time, even when the majority choice was obviously wrong.

Capability tended to influence bad decisions by its absence, Pell suggested. “How many people on Goldman Sachs’ board understood the complexity of the derivatives they were selling?” he inquired.

The management of Halifax Bank of Scotland (HBOS) rejection of capability precipitated a disaster for the firm, according to Pell. Paul Moore, head of group regulatory risk at HBOS told senior leadership that be believed that the firm’s aggressive sales structure was outstripping controls. After his presentation, HBOS’s chairman congratulated him for his candor. However, within a few weeks, CEO James Crosbie called him in and fired him, Pell related.

“If you’re in that organization, once you’ve seen the head of group regulatory risk fired, you’re going to keep your mouth shut,” Pell said. As a result of rejecting Moore’s expert input, Pell added, “HBOS was brought to its knees – it suffered $80 billion in losses, and only a shotgun wedding with Lloyd’s bank force by the government could ensure its survival.” The factor of Complicity prevails in cases where key actors knew their firms were making catastrophic decisions but declined to interfere because personal implications were great, Pell explained. He cited a statement from Citigroup CEO Chuck Prince shortly before the financial crisis: “When the music stops, in terms of liquidity, things will be complicated. But as long as the music is playing, you’ve got to get up and dance. We’re still dancing.”

Too many people in the investment banking business were making too much money, with too little personal exposure, while facing too much social pressure to dwell much on the potential consequences, Pell suggested. “You’re not uniquely responsible, so you can hide,” he commented.

Pell’s “Car Crash” category referred to fixing something that wasn’t broken. In a 1985 ploy to boost sales, the Coca-Cola company decided to replace its classic formula with “New Coke.” The beverage firm daringly cleared the shelves of all its traditional product so that the new one was all that was available.

Public reaction was extremely negative, Pell related. A psychiatrist reviewed customer complaints and reported that they manifested the same emotion that people used when talking about the death of a family member. “It took three months to abandon New Coke, but classic Coke went on to increase its sales,” Pell said.

As with Complicity, the factor of Consequences related to their absence, and what that translated to in terms of incentives, in Pell’s telling. “Something has gotten broken in the way that capitalism works,” he commented.

Pell noted that CEOs who had made bad decisions tended not to suffer. In fact, they received what to most people would be huge rewards for their catastrophic incompetence. Pell related that Research in Motion paid CEO Thorsten Heins $22 million to go in 2013 – and there was nothing unusual about that result.

Leo Apotheker was CEO of HP for only 11 months, and during that period he oversaw the acquisition of Autonomy for $11 billion. It eventually resulted in HP taking a write down of $8 billion, but the company paid Apotheker $10 million to leave.

“If you’re a senior guy, you must ask yourself: ‘What’s the worst outcome?” Pell commented. “They treated the money like their own. What happens when you remove that moral hazard? People say, ‘I don’t care.’”

What can be done in the face of bad decisions their catastrophic results? Pell suggested that the first step is simply to create awareness of how they occur. “The number one thing is to have culture where decisions can be greeted with appropriate robust challenges from appropriate people,” Pell said. He added that diversity could help to inject different kinds of critical thinking into the decision making process, for example by simply having more women on boards. Companies must ask, he insisted, how effective their boards are at holding people to account.

In reviewing his question – “Why do smart people make bad decisions?” – Pell offered that, “It doesn’t matter how smart you are; we’re all human, all pretty to the same parts of the human condition.”

By way of illustration he described a young man, 25 years ago, investing all his money in a wine bar. He knew that the numbers were dodgy, but he went ahead anyway and suffered catastrophic consequences. That man, he confessed, was Max Pell.

“I don’t know if the choice of this topic was a good or bad decision,” Pell said in closing. “Only you can answer that. But don’t judge it by its outcome alone.”