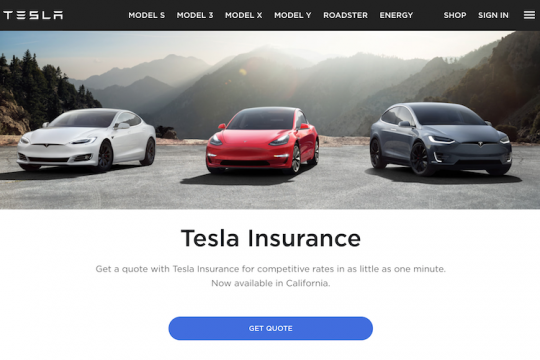 This Wednesday, Aug. 28, 2019, automotive manufacturer Tesla launched an insurance distribution company, Tesla Insurance, providing what the company characterizes as a competitively-priced insurance offering designed to provide Tesla owners with rates up to 20 percent lower in general, with a drop of 30 percent possible for some owners. The product offers comprehensive coverage and claims management to Tesla customers in California, with plans to expand to other states.

“Because Tesla knows its vehicles best, Tesla Insurance is able to leverage the advanced technology, safety, and serviceability of our cars to provide insurance at a lower cost,” said a Tesla blog post announcing the news. “This pricing reflects the benefits of Tesla’s active safety and advanced driver assistance features that come standard on all new Tesla vehicles.”

Tesla’s blog post announcing the insurance offering did not name an insurance company partner, but an April 2019 filing to the California Department of Insurance indicated that State National Insurance Company, Inc. (Bedford, Texas), a subsidiary of Markel Corporation (Richmond, Va.), would be the auto manufacturer’s carrier partner.

Off to a Rocky Start

Tesla Insurance got off to a rocky start, according to a report from The Verge. A few hours after launching its website to receive quotes, the site stopped offering quotes and Tesla suspended access to the site. The Verge reported that the site was back up and running as of the following evening, though customers continued to complain about glitches in the quoting process for some time.

With regard to the proposition in general, Tesla founder Elon Musk is putting someone’s money at risk in the belief that Teslas with various ADAS (advanced driver assistance systems) features—and perhaps the type of people who buy Teslas—are better risks than some/many/most insurers seem to believe, observes Donald Light, Director, North America Property/Casualty Practice, Celent. Light notes that the fronting arrangement reported on in April means that somewhere a reinsurer or reinsurers would be assuming what may be a good bit of the underlying risk.

“Who will pay the claims that do occur, and the impact on Tesla’s and the reinsurer’s bottom line remain to be seen,” Light comments. “The underlying issue—whether vehicles with several ADAS features will reduce losses—remains a critical question for auto insurers as the proportion of ADAS-equipped vehicles in the fleet on the road continues to climb.” It will take significant amounts of data to properly answer that question, but it is on that score that Tesla is seizing an opportunity, according to Ian Sweeney, General Manager, Mobility, Trov (Danville, Calif.). “We’ve been partnered for several years with brands like Waymo and Free2Move—Groupe PSA’s car-sharing serving—to offer insurance on their autonomous and fleet vehicles and our technology allows us to adjust insurance premiums based on real-time data associated with each vehicle’s current risk state,” he notes. “Case in point: Free2Move is already seeing 30 percent savings over traditional insurance costs.”

Tesla can quantify the risk more precisely to offer lower prices by leveraging the information and features available to them as the manufacturer of the vehicles, Sweeney opines.

The Role of Protection Evolves with Autonomous Mobility

“Whether or not they should underwrite their insurance remains to be seen,” Sweeney acknowledges. “Regardless, this is just the first such move you’ll see in the industry towards leveraging technology and environmental data to drive efficiencies and cost-savings. The role of protection is evolving along with autonomous mobility, and we will see the insurance industry change as a result. Those who aren’t leveraging data, and the modern technology InsurTechs can provide will get left behind.”

Celent Report: Re Rethinking the End of Auto Insurance