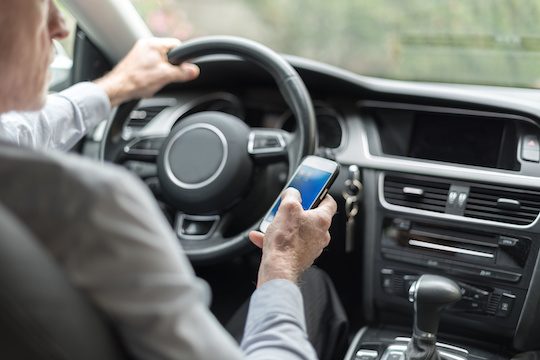 Reading paper maps used to be one of the most common forms of distracted driving. Although for the most part, technology has rendered that activity obsolete, connected car technologies such GPS, while helpful, are still taking drivers’ eyes off of the road. Even as cars themselves continue to get safer thanks to better technology and design, the rise of smartphones has been correlated to higher rates of road accidents and traffic fatalities. Coupled with any kind of driver inexperience, even the most benign distraction—changing your music playlist for example—creates for a risky, often deadly, combination.

Around the globe, more drivers are having distracted-driving accidents, and automobile insurers and policyholders alike are feeling the effects of this new hazard. More accidents equate to higher costs for insurance companies, and insurers pass along these costs to customers. For example, earlier this year, the Wall Street Journal reported that Horace Mann Insurance (Springfield, Ill.) plans on hiking auto insurance premiums an average of 8 percent this year on top of a 6.5 percent hike last year, and the Boston Globe reported that insurers planned on increasing auto premiums 3 percent to 6 percent on Massachusetts drivers in 2017, on top of increases of 6 percent to 9 percent in 2016.

In addition, while studies show that the majority of drivers—nearly 80 percent—say that texting or emailing while driving “is completely unacceptable,” every year in the U.S., almost a half million people are injured or killed in traffic accidents attributed to the combination of texting and driving, according to the National Highway Traffic Safety Administration (NHTSA). Not only are these behaviors making our roads more dangerous, they are also attributed to rising insurance rates, up 16 percent since 2011.

While many believe that texting is the number one cause of distracted driving, the cars themselves are actually contributing to this alarming phenomenon. A new study issued in October issued by The American Automobile Association Foundation for Traffic Safety found that in-vehicle information systems—including SatNav, MP3 players, radios, cellphones and messaging devices—take drivers’ attention off the road for too long to be safe, much like texting.

New technology in vehicles is causing us to become more distracted behind the wheel than ever before. According to the NHTSA, 53 percent of drivers assume that if manufacturers put “infotainment” dashboards and hands-free technology in vehicles, they must be safe. And, with some U.S. state laws focusing on handheld bans, many drivers honestly believe they are making the safe choice by using a hands-free device. But in fact, these technologies distract our brains regardless.

While technology is one reason we face the distracted driving issue, it can also be the solution. Telematics, specifically, can help monitor and change distracted driving habits, which can save lives and is beneficial for insurers as well, directly improving insurers’ loss ratios through less frequent and severe accidents. Telematics can help cut down “distraction-affected” crashes and injuries by helping drivers take proactive steps to avoid distractions, and using technology to identify the risks and behaviors that lead to distractions in the first place.

Insurers may want to consider an education-based approach vs. the traditional penalty-focused approach that may shut off a smartphone altogether. With the right application that allows them to monitor how the phone is being used during a trip, risky behaviors with different severity levels can be detected and analyzed, with final details and score communicated to both the Insurance partner and their policyholder. Telematics can monitor and communicate feedback to drivers so they better understand the risks, which allows insurance customers to incentivize drivers to stay off their phones while driving.

What Data Is Collected?

Data on smartphone use is correlated with vehicle driving and contextual data to score distraction levels. This data can then be used as an additional risk factor for usage-based insurance driver behavior scoring. Insurers also use this data for feedback programs to coach drivers and reduce distracted driving.

While driving (and only while driving), data from drivers’ smartphones is collected along with other telematics data. Common activities monitored include:

In addition, telematics can provide feedback to drivers on their overall driving habits, so they learn to practice safer driving—less hard braking, less tailgating, etc.—and telematics can also help with safer routes and even to maintain safer vehicles. Consumers have always played an active role in preventing distracted driving crashes, and telematics now acts as a virtual “coach” to help them to do so.

Overall, distracted driving is a growing epidemic around the globe, as the advent of smartphones and connected car features continue to take drivers’ attention off the road. Drivers can help cut down “distraction-affected” crashes and injuries by taking proactive steps to avoid distractions, and insurers can offer technology to help identify the risks and behaviors that lead to distractions in the first place.