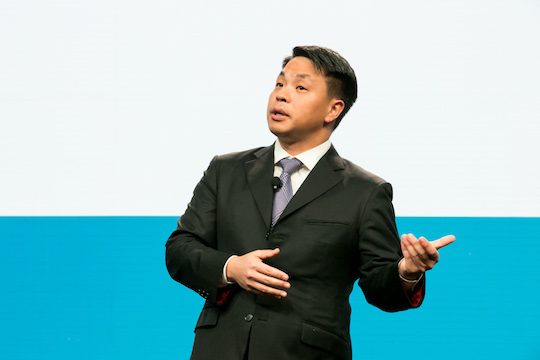 In his keynote remarks at Connections 2017 in Las Vegas this week, Guidewire Software’s (Foster City, Calif.) annual user group meeting and partner gathering, CEO Marcus Ryu placed his update on the company’s strategy within a context of the insurance industry’s broader business and social mission. “In 2001, at the start of Guidewire, my co-founder partners and I were attracted to the enormous scale of the $2 trillion global P&C insurance industry,” he said.  “Sixteen years later, I am struck by how much larger we need the industry to become.”

Underinsurance represents a three-fold challenge, according to Ryu: “A challenge of profitable operations, because only strong, efficient insurers can bear the risks we face; a challenge of distribution, which omnichannel engagement can address by making products much easier to understand and buy; and a challenge of data, because you can only insure what we have the data to underwrite and price,” he elaborated. “Of course, addressing underinsurance also entails growth for the global industry.”

Recent catastrophes, including Atlantic hurricanes and wildfires in the Northwest U.S. demonstrated a glaring disparity between insured and uninsured losses, Ryu noted, with about 70 percent in the latter category typical for the U.S. and 90 percent in underdeveloped countries. “The urgent work before us is to expand the reach of insurance: to render it easier to distribute and service, to close the underinsurance gap, and to develop new products that cover the emerging ‘21st century risks,’ [such as] cyber, supply chain disruption, terrorism, and pandemic,” Ryu said.

Addressing the underinsurance problem, along with other challenges of the future, will require the core insurance discipline, best described by Warren Buffet, according to Ryu. “The traditionalist view distills insurance success into a single commandment: select and price risk accurately, and resist the temptations of unprofitable growth—in short, underwriting discipline,” he said.

Succeeding is both a moral and economic imperative requiring a reinvention on the part of both insurance carriers and Guidewire, as a vendor serving the property/casualty industry, within the next five to ten years. However, in the current technology-driven environment, novel disciplines will be required in addition to underwriting discipline, he stressed.

Ryu identified these as operational, digital and data imperatives. Before elaborating he alluded to the difficulty of gauging the pace of change. Some industry observers, Ryu noted, expect an industry reinvention on a more attenuated timeline than five to 10 years. The InsurTech phenomenon might provide clues, he suggested, referring to the popularity of the 2017 InsurTech Connect conference.

“Just a few weeks ago in this city, 4,000 people came to the InsurTech Connect conference eager to discuss a surging investment category that has attracted $3.5 billion in early stage capital for at least 250 companies in the P&C segment,” Ryu remarked. “To put this number in perspective, consider that Guidewire raised a total of about $25 million in its years as a private company—so, something like 150 Guidewires have been funded within the last three years.”

The most interesting of these to Guidewire are those applying new technology to specific insurance problems, such as partners Octo Telematics (London), EagleView (Bothell, Wash.) and WeGoLook (Oklahoma, City), according to Ryu. Distinct from that group, in what Ryu characterized as representing a “renaissance,” are the 60 percent of InsurTechs focusing on distribution, such as CoverHound (San Francisco), Embroker (San Francisco) and PolicyGenius (Brooklyn, N.Y.).

Others are competing with traditional insurers, such as Metromile (San Francisco), Slice (New York) and German startup FRIDAY (Berlin). At least 30 InsurTechs are experimenting with peer-to-peer risk-sharing models, including Teambrella (St. Petersburg) and Bandboo (Singapore).

Ryu reserved special mention for Lemonade (New York). “With characteristic modesty, the company’s Chief Lemonade Maker says they have solved moral hazard and adverse selection,” he commented.  “How? AI and robots. There you have it.”

The sour aftertaste of Lemonade’s critique of the insurance industry might be sweetened by reflecting on the history of technology bubbles, suggested Ryu. “Excitement leads to over-investment in new sectors; many companies fail and investors are disappointed, but the best ideas endure,” he said. Two thirds of dot-com era companies lost 80 percent of more of their value, and a comparable phenomenon is observable in the FinTech arena, he noted.

“Despite $90 billion of early-stage capital invested in the last six years in fintech, there is no indication that any of the new players…will threaten the existing order in banking,” Ryu commented.  “This is completely unsurprising: incumbents have enormous advantages in scale, existing books of business, and regulatory and domain expertise.”

As banks invested in FinTech, so also are insurers investing in InsurTech, expecting to assimilate the best ideas, Ryu noted. They will emerge successful by doing that and, he added, “by embracing [the] three new imperatives to add to Warren Buffet’s central truth.”

With regard to the “operational” imperative, Ryu spoke of the emergence of “precision insurance” whereby insurers can set goals and identify measures that can driver progress toward the. He noted that the maturation of cloud-based technology enables the collection of all relevant processing data into a large “lake” of both structured and unstructured data. That data can subsequently be made accessible via analytics embedded in core systems—a concept Guidewire is implementing under the moniker “Smart Core.”

With regard to the “digital” imperative, Ryu asserted that P&C insurance is the ideal industry to be digitized, as it has, no physical inventory and creates value through analysis, expertise, and communication. “The imperative, therefore, is to digitize every interaction with customer, agent, broker, or partner,” he said.

Ryu elaborated on the importance of data capture capabilities and alluded to Guidewire’s recent partnership with Salesforce (San Francisco) to embed the key insurance entities and functions of InsuranceSuite natively into Salesforce Financial Services Cloud.  “This supports a digital front-office for those insurers for whom agents will continue to play an essential role, allowing them to live in a single environment combining CRM, marketing, and core insurance functionality,” he commented.

Toward an Anticipatory Understanding of Risk

The challenge will be accessing vast amounts of data outside the traditional confines of policy administration systems, Ryu said. ‘The data must be ‘listened’ for, parsed and curated, and stored in repositories managing exabytes of data,” he explained. “And against these huge data sets the industry must apply machine-learning techniques to identify loss drivers at the insured level, bottom-up.”

Alluding to Guidewire’s “Smart Core” concept and the acquisition of data science company Cyence (San Mateo, Calif.), Ryu described an approach of listening to external data sources and applying risk analytics to define and underwrite next-generation insurance products. “If, with your guidance, we get this right,” Ryu addressed Connections attendees, “we can help the industry move from a purely actuarial to an anticipatory understanding of risk, and to syndicate the risks we face as 21st-century societies.”

“Now, we should ask, with rational skepticism: ‘But does the new data science work?’,” Ryu acknowledged. “It’s early, but I wouldn’t bet against it.”