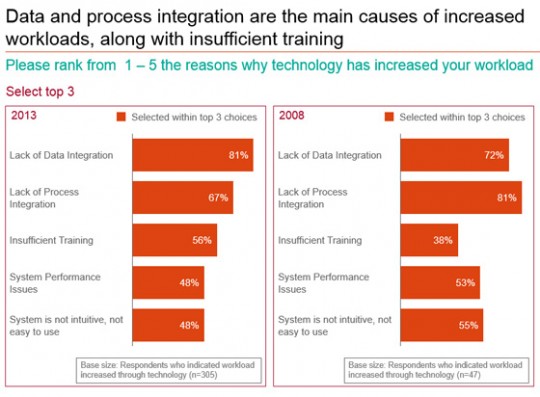 (More than half of the respondents to Accenture’s U.S. Commercial Underwriting Survey said that, while technology has lifted underwriting quality, it has increased their workload, due to the lack of data and process integration, plus insufficient training.)

Commercial insurers are nearly unanimous in their belief that technology investment will increase the quality of their underwriting, but lack of data integration and technology training continue to limit underwriting productivity and efficiencies, an Accenture survey of 559 U.S. commercial underwriters reveals. The survey, undertaken in June and published Nov. 2013, polled senior underwriters, department or product managers and other underwriting executives.

Ninety-three percent of respondents to the survey agreed that technology investment was the best way to improve underwriting quality, and 60 percent affirmed that technology has significantly improved underwriting performance. However, more than half (54 percent) said that technology has also increased their workload, principally due to the lack of data integration across their companies (the cause cited by 81 percent of respondents). Other major reasons for increased workload included lack of process integration (67 percent) and insufficient training (57 percent). “There is no question that technology has brought a step change in the quality of insurance underwriting in recent years,” comments John Mulhall, a managing director in Accenture Property and Casualty Insurance Services and the management consulting lead for insurance policy services offering in North America. “But the full benefits of technology investments in terms of productivity and efficiency cannot be achieved without broader data and process integration across the organization.”

Commercial underwriters face a range of challenges in evaluating risk, including difficulties in obtaining historical, market and claim information while pricing the risk, disconnected account information, and unnecessarily complex communication channels, according to Accenture Property and Casualty Insurance Services managing director Michael Reilly. “Underwriters must often re-enter data to and from multiple systems and must rely on an employee base that is subject to turnover – and also with many of the most experienced underwriters nearing retirement,” he asserts. “Automated underwriting systems offer the promise of better information and greater efficiency through the reduction of re-working and errors.”

Respondents to the Accenture survey said that they will pursue improvements in underwriting effectiveness by investing in process automation (57 percent), predictive analytics for risk evaluation and pricing (51 percent, and external data to evaluate risk (51 percent).

Carriers should consider investing in measures to improve underwriting effectiveness before a soft market cycle fully manifests itself, according to Accenture’s Mulhall.  “Softening rates and rising expense ratios will expose inefficiencies hidden in a more favorable market,” he says. “Carriers that invest effectively in data, tools and technology to improve underwriting accuracy and efficiency rather than just adding another tool to the process, while managing their strategy through market cycles will separate themselves from those unable to keep up.”

Other key findings of the survey include: