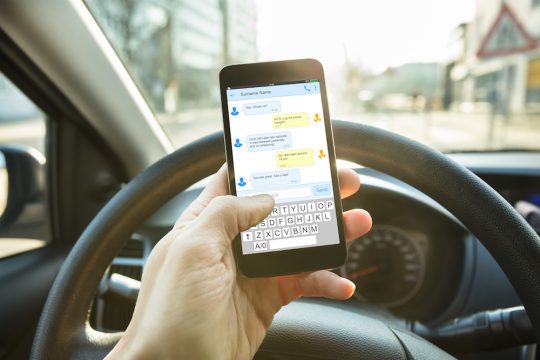 You are more likely to be reading this on a mobile device than on a laptop or desktop, and almost certainly not on a printed page: and therein lies the source of the problem. A Pew survey from June 2017 revealed that 85 percent of U.S. adults now get their news on a mobile device at least some of the time, up from 72 percent last year and 54 percent in 2013.

At the outset here let me be clear: I am not a Luddite—anything but. I am an eager and early adopter and user of gadgets and technology. I owned one of the very first mobile car phones long before cellphones existed. I am, however, concerned about our addiction to some newer technologies, particularly smartphones, and the dangerous and pervasive distractions they are creating.

We are quickly becoming permanently distracted by technology, whether in motion or stationary—and what may be even more disconcerting is that we know it and most of us are doing nothing to stop it. Dr. Sally Andrews, a psychologist at Nottingham Trent University in the U.K., conducted research which shows that “a lot of smartphone use seems to be habitual, automatic behaviors that we have no awareness of.” Smartphones have come to occupy what is referred to as “privileged attentional space,” comparable to the sound of our own names.

According to Pew Research Center, more than three-quarters of Americans own a smartphone. In 2016, American consumers spent an average of five hours a day on their smartphones, nearly double the amount of time from 2013, says research firm Flurry Analytics. We habitually check our smartphones hundreds of times a day, from the moment we awake until bedtime.

Of the many distractions that permeate our lives, distracted driving is especially dangerous. The past two years have seen the greatest increase in auto accidents in 50 years.

Distracted driving has become a national safety crisis because of the rise of smartphones. According to statistics from the U.S. Department of Transportation, 10 percent of fatal crashes, 15 percent of injury crashes and 14 percent of all police-reported motor vehicle traffic crashes were attributed to distracted driving. In 2015, 3,477 people were killed because of distracted driving, and 391,000 were injured. Total auto fatalities grew 5.6 percent to more than 37,000 in the U.S. last year.

In spite of all the new driver assistance and accident avoidance technologies appearing in newer vehicles, auto accidents have increased 14 percent over the past two years—the biggest increase in more than 50 years, according to the National Safety Council.

Distracted driving, and the ubiquitous use of smartphones behind the wheel, is one of the leading causes of this deadly trend. Too many drivers are texting, talking, surfing the web, and using social media and apps on their smartphones while driving.

And new sources of distraction appear almost daily and adopted without hesitation. Case in point: a new in-car app from General Motors called Marketplace lets drivers order coffee and browse deals while behind the wheel. It’s shocking that it even exists.

A recent survey conducted by Harris Poll on behalf of the Property Casualty Insurers Association of America (PCI) reveals that 92 percent of respondents perceive that distracted driving, including the use of a cell phone, talking to passengers, eating and adjusting the radio is the number one contributor (92 percent) to the increase in crashes across the country.

As professionals, we struggle with our work/life balance and we suffer from scattered demands on our attention. We all strive to be more productive but mobile technology is not only failing to help us accomplish that, but it is actually making it worse.

Adding to all of this, 29 states and the District of Columbia currently have laws legalizing marijuana in some form (medical and/or recreational) and according to the Highway Loss Data Institute, collision rates were about 3 percent higher in three states that have approved the sale of marijuana for recreational use: Colorado, Oregon, and Washington. There is no reason to expect this new contributor to distracted driving to do anything but grow.

Work related pressures also play a part in distracted driving. A recent survey conducted by Harris Poll for Travelers Insurance found that 43 percent of respondents who drive were in touch with work either by talking on the telephone (38 percent); texting (17 percent) or emailing (10 percent). These drivers admit to using the phone while driving, often because they feel the need to be available at all hours or don’t want to upset the boss, a survey has found.

And distracted driving is only the beginning; we are already seeing technology distractions creeping into other aspects of our daily lives: wearables and smart home, voice-activated, internet-connected  devices are proliferating, interrupting to notify us of something we may or may not care about.

There are solutions to distracted driving and we should actively embrace, promote and adopt them.

A new generation of telematics service providers are partnering with auto insurance companies to offer distracted driving prevention solutions on mobile apps. Mobile device manufacturers are beginning to build in safeguards. Apple’s new mobile operating system iOS 11 features a long overdue “Do Not Disturb While Driving” mode to combat the dangerous practice of texting from behind the wheel, while also switching off other alerts that entice people to look at their phones while driving. And the adoption of digital voice assistants is rising, although they do not completely eliminate distracted driving. Legislation against distracted driving, adherence and enforcement varies widely and we should continue to support it and ensure that penalties are severe and enforcement efforts are strict. No states ban all cell phone use but 47 states plus D.C. ban text messaging for all drivers. Thirty-eight states and D.C. ban all cell phone use by teen drivers and 21 states and D.C. prohibit any cell phone use for school bus drivers. And fourteen states prohibit all drivers from using hand-held phones while driving. However, these regulations are not fully observed or enforced.

And, of course, there is our own self-control and just plain common sense. Why not just turn off our smartphones when we get into a vehicle we are about to drive? In Silicon Valley, some tech leaders are predicting a new trend will become widespread in response to the problem—“smartphone fasting,” i.e., going without a smartphone for varying lengths of time.

But just think: technology also promises us self-driving cars at some nearby future point—at which time we can use our smartphones 100 percent of the time if we want while in transit. That resolves distracted driving, but the larger issue of technology distraction from family, friends and our daily lives remains to be addressed.