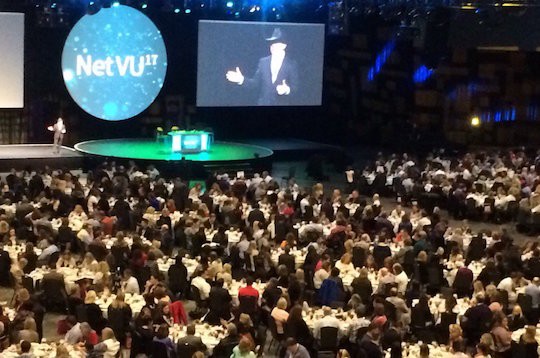 Distribution is a natural starting point for digital disruption of insurance, and statistics help to make the case that this segment of the insurance value chain is the locus of greatest activity. Approximately $1.7 billion was invested in InsurTech ventures in 2016, according to CB Insights (New York), and about one third of about 600 startups were focused on distribution, according to SMA (Boston). Vertafore (Bothwell, Wash.) executives discussed these and other factors driving change in a conversation with Insurance Innovation Reporter at the distribution-focused vendor’s NetVU17 user group conference in Nashville. Vertafore reports has conducted surveys with about 300 carriers and several hundred agencies, to better understand how their customers are navigating changes in insurance distribution. “We have spent last five months getting out to the community to gather an ‘outside-in’ perspective around their challenges, the problems they want to solve,” commented Amy Zupon, CEO, Vertafore.

Theo Beack, senior VP and CTO, discussed several key findings from the surveys and other outreach and follow-up undertaken by Vertafore.

First among these is the prevalence of technology, in terms of its overall role in distribution and the levels of technological maturity at agencies, according to Beack. Research has suggested that many agencies are disappearing, and yet the overall picture includes a steady flow of new agencies, keeping the numbers flat. “Every year over a thousand agencies emerge,” he said. “They are very tech-driven, tech-savvy, and it’s remarkable how they are accelerating growth through the utilization of technology.”

Distributors are also increasingly diversifying their businesses, expanding into new lines of business and even acquiring MGA practices, according to Beack. “Agents are hedging because the personal lines market has become difficult, but also because new products are being sold,” he says. “It’s not a static market—new products creating new opportunities and smart agents are finding niches.”

“They need an increasing variety of solutions to bind customer contracts, and build new workflows and disciplines into their organizations,” he added. “They’ve had to rethink how they apply technology, and that makes us think differently about the solutions we bring to market.”

Carriers and agents are noting changing expectations on the part of customers, Beack reports. Notably, younger customers are less inclined to want to communicate by voice, preferring texting or messaging applications. “They would also like more self-service,” he said. “That’s also requiring agencies to think differently about how they interact, and provide the same high quality of service through electronic means.”

Scale has become more important to agencies, and managing it well has required a focus on efficiency, Beack said. “We’re seeing [a drive towards] far more efficient customer service and back-office processing,” he comments. “Carriers understands that they need to connect to the tools their producers are using.” Taken together, the findings of Vertafore’s outreach, combined with industry news and analysis from firms such as CB Insights and SMA amounts to genuine change in the industry, according to CEO Zupon. “There is real transformation going on,” she affirmed. “It’s why we brought new leadership, and it’s fundamentally why we did the survey work to get to the specifics around what is really happening.”

Zupon notes Vertafore’s new ownership by investment firms Bain Capital Private Equity and Vista Equity Partners in May 2016. Vertafore was acquired by TPG Capital  in 2010 in a leveraged buyout for $1.4 billion. It was earlier acquired by Hellman & Friedman and JMI Equity in 2004. The new ownership is dedicated to keeping Vertafore on its existing mission of reducing the friction between agents and carriers in the new business process, and helping clients navigate emerging digital challenges, according to Zupon.

“These are both best-in-class firms, both bring experience around running software and data platforms, and also in investing in companies focused on insurance,” she said. They bring discipline in driving operational excellence, and also a passion for making the right investment decisions to place us on the right path for the long term, to keep Vertafore on the trajectory that it’s been on.”

As in the case of the original emergence of e-commerce, the growth of direct distribution is a key issue in the insurance new business process, as startups and traditional players apply new technologies and tools, acknowledged Beack. However, it remains one issue among many, well short of amounting to a “scare” or “crisis,” he insists. “Some of these innovators are trying to take friction out of the system, but selling insurance is ultimately a complex process, involving a complex process involving products that, ultimately, are not well understood,” he elaborated. “The opportunity for us it to remove friction so that customers can be more informed when they buy complex products.”

Unique Opportunity to Change the Business

Even as technology can make the insurance buying process easier for people who increasingly prefer self-service for many tasks, it’s also driving other behavioral trends, including using technology in ways that support a sense of community, consumer localism, and  richer personal business relationships, observed Bruce Winterburn, Vertafore’s VP of Industry Relations. “I personally see a renaissance of click-and-mortar with brick and mortar,” he said. “It’s a unique opportunity for vendors like ourselves, with eyes open to changing this business.”

Winterburn confided that he has bought into the trend on a personal level. “I took a significant amount of my retirement money and bought a small-town independent insurance agency that was on its last legs,” he said. “Everyone wrote about how Google was going to kill us all, but Google loves local.”