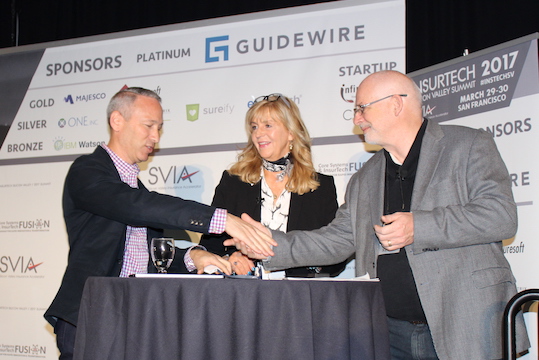 In the early days of insurance—through mutual fire societies or the sharing of maritime risk at Lloyd’s coffee house—the mutual benefit of policies to all parties was obvious. The situation is very different today, when 25 percent of Americans believe that it’s acceptable to defraud their insurance company, and the Urban Dictionary defines insurance as “A business that involves selling people promises to pay later that are never fulfilled,” as Lemonade CEO Daniel Schreiber noted in his Wednesday, March 29 address at The Silicon Valley Insurance Accelerator’s Core Systems and InsurTech FUSION conference in San Francisco. Schreiber and Eugene Lee, VP, Data & Analytics, Guidewire Software—who delivered the morning keynote on the same day—suggested that engagement technologies could make fundamental changes to the way insurance professionals work and how insurers and policyholders relate to each other.

Schreiber pointed to fraud as an indicator of “deeper malaise” in the insurance industry. He noted that fraud afflicts many sectors of economy, but that it operates very differently in insurance. “The people who defraud insurance companies are not hackers from Moscow or China—they are us: it is consumers who are conducting the fraud,” he said. “Which is odd because they are people who are generally well-behaved.”

Lemonade’s business model applies artificial intelligence (AI) and other technologies to drive efficiencies and make for a much faster and more pleasant customer experience. However, Schreiber stressed that Lemonade uses its customer experience to address what he characterized as a problem of “misaligned incentives” that leads to fraud and customer dissatisfaction.

Customers perceive that they are charged premiums endlessly and then likely to be disappointed in the event that they need to file a claim. To underscore the point, Schreiber quoted the explanatory text following the Urban Dictionary definition of insurance:

Gomer paid flood insurance premium for years, but then the insurer decided to go out of business when the flood came because management had spent all the premium on hookers and private jets.

The perception is not entirely justified, as insurers follow internal incentives to avoid paying claims. “If I’m trying to be careful to not play claims, when I can get away from it, I have an incentive to throw paper at you,” he said.

Lemonade avoids the perception of unfair advantage taken by insurers through its policy of taking a 20 percent administrative fee—never more nor less—in exchange for its service, and then paying any “excess money” left over after claims to a charity of the policyholder’s choosing.

Today consumers willingly share vast amounts of data with companies such as Google and Amazon that they wouldn’t dream of sharing with their insurance companies, Schreiber noted.

Data and the Next Generation of Underwriting

“You can ask, ‘Would I trust my ins co the way I trust Google?—and the answer today is categorically no—and trust is a precondition to getting that data,” he said. “Only once you have that data can you apply the machine learning to do the next generation of underwriting.”

Having earlier cited a 14th century Florentine merchant whose view of insurance was remarkably similar to the one expressed by the Urban Dictionary, Schreiber acknowledged that changing the relationship between insurer and policyholder was by no means a foregone conclusion. “We’re not declaring victory—we know it’s a gamble,” he conceded. “It may seem naïve, but I like the naïveté, I like not being cynical.”

Schreiber added that microfinancing has provided examples of how financial contracts can work within a different moral context in which borrowers are not tempted to defraud. “We hope that there are changes, and we see an element of ‘back-to-the-future’—for example, if you consider Airbnb, it’s either cutting edge, or a very old way of doing business,” he noted.

Guidewire’s Lee addressed a different aspect of the humanization of insurance in his opening keynote, which he structured as a tour through three areas of insurance technology development:

“The North Star of the Engagement Era systems is to enable the insurer to meet the users on their own terms—this includes customers, agents, brokers, vendors,” Lee commented. “It’s more than just consumers interacting with a portal; it’s an entirely new world view.” That view focuses on value generated rather than on contracts, transactions or even workflow; it considers impact on external constituents as well as internal employees; and it expects hybrid technology environments, given the complexity of problems that arise from a paradigm of engagement, according to Lee.

Because the paradigm of engagement focuses on human experiences rather than the completion of transactions, it tends to humanize all aspects of the insurance value chain, not merely the point of sales and service, Lee suggested.

“As disoriented and disrupted as we may sometimes feel, the ultimate goal of the Engagement Era is not to make people dispensable but rather to elevate the types of work that insurance professionals are required to do,” he said. “This, in fact is the same goal as those of the eras that preceded it: to improve the human condition.”

While new levels of automation enabled by technologies such as AI have raised questions about displacement of workers, Lee asserted that research shows that a large majority of people’s time is spent on basic tasks and compliance.

“What insurance knowledge workers want is to use their training and education to better serve customers, to make complex decisions and judgements, and to teach others to do the same,” Lee elaborated. “The only way they can do that is if we in this room automate the menial tasks that waste their time and diminish their empathy and creativity.”