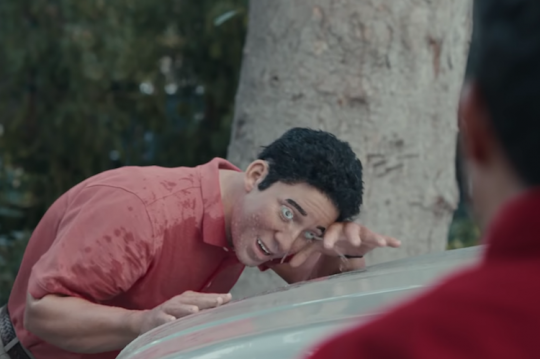 As a State Farm (Bloomington, Ill.) agent reassures policyholders that he’ll help take care of their routine automobile damage, he’s interrupted by a bizarre-looking creature that turns out to be a robotic agent in rather unconvincing human form—thus begins an edgy ad released by State Farm last weekend. “No, I’ll take care of it!” the robot butts-in. In the voice of the human agent addressing the perplexed policyholder, State Farm makes its point: “The budget insurance companies are building these cheap knockoff robots to compete with us.” Before the 45-second ad is over, the RoboAgent is bending over a car spurting tears on the hood of the car in an unconvincing effort to demonstrate his capacity for empathy.

In response to he dig at “budget insurance companies” Lemonade CEO Daniel Schreiber, asked via Tweet whether, “the country’s biggest insurance company is feeling the heat and getting A-listers to bash technology.” Schreiber got back up from Lemonade co-founder and COO Shai Wininger who announced that Lemonade would run State Farm’s ad “on our own dime.” A further echo was provided by a Forbes article on Monday characterizing the exchange as a “battle of old vs new” that represented State Farm’s ad “backfiring” on the company.

All of the participants in the kerfuffle had their axes to grind—in addition to the more obvious motives of State Farm and Lemonade, the Forbes article “contributor” Eyal Bino is a partner at ICONYC labs, which his bio describes as a customized acceleration program for top early-stage Israeli tech startups looking to accelerate growth in the US market via NYC. In the end, the kerfuffle produced heat rather than light, but it raises excellent questions about the promise—and perhaps the shortcomings of automated services solutions in insurance.

Artificial intelligence (AI) and robotics have come a long way, but the kinds of service experience they produce is no match for the nuanced, connected experience that a good agent or CSR delivers, asserts Craig Weber, a veteran analyst and consultant to the insurance industry and former CEO of research and advisory firm Celent. “In this video, State Farm is picking up on an emerging issue for many consumers,” Weber comments. “Namely, that there is no substitute for talking to a live human being.” That may be true for certain situations, but not for all, suggests Michael Crowe, CEO and co-founder of Clearsurance (Newburyport, Mass.), an online publisher of insurance consumer data seeking to provide greater transparency to consumers. Traditionally, customers associated their level of satisfaction with human contact. However, the definition of customer satisfaction is evolving, according to Crowe. “At the end of the day, if your claim or question is handled to your satisfaction, does it matter if it was done by a human or bot? In fact, if a bot can get the same job done in a matter of seconds, doesn’t that make for a better user experience?” he asks.

“What we’re seeing from the consumer data so far for Lemonade is that their bot-based model is making for a great service experience,” Crowe adds. “The 4.75 customer service rating for Lemonade—albeit from a much smaller number of reviews than State Farm—shows how consumers feel about the service experience of dealing with bots.”

The much smaller number of reviews brings to mind Forbes contributor Bino’s noting that Lemonade now insures 250,000 people. Lemonade’s growth has been impressive—and it remains a more important indicator than its profitability, if the aim is to be acquired. But considering State Farm’s 83 million policies, one could be forgiven for thinking of Dr. Evil’s demand for “One million dollars!” But Clearsurance’s Crowe has a point about changing expectations, particularly with regard to self-services. He reports that Clearsurance’s user testing and qualitative consumer data has revealed that insurance consumer digital purchasing habits are evolving to the point where they expect to be able to buy insurance the same way they buy other goods and services from a mobile device and with less human interaction. “Companies have been investing in technology to speed efficiency and save consumers time that they would rather spend on anything other than insurance,” he says. “Ultimately, consumers will dictate how insurance is sold and serviced, and insurance providers will have to evolve.”

State Farm would seem to be on board with the need to evolve, given that it is piloting its own low-touch auto insurer—HiRoad—to say nothing of other investments and initiatives. In response to query about the RoboAgent ad, the insurer responded that, “Our ads are intended to educate and inform as well as differentiate us from our competitors, and our differentiator is the ability to overlay human relationships with enhanced technology.  We have strong relationships with our customers and continue to offer the digital capabilities they want and need.”

The occasion of a hoary incumbent poking fun at bots is an apt opportunity for publicity-hungry startups, but the human-vs-robot construction is a false dichotomy—especially given bots’ current stage of maturity. There are roles for both humans and machines, suggests Matthew Josefowicz, CEO of Boston-based research and advisor firm Novarica. “Novarica has always said that cyborgs are better than robots—that is, humans assisted by technology that helps them manage information and relationships are better than full automation,” he says. “The main problem is that most insurers tend to think in binary ‘high-tech or high-touch’ terms. This denigrates the value of technology in creating and supporting human relationships, and forces customers to choose between efficiency and ‘caring.’”

Unless the ‘caring’ has a very high perceived value, Josefowicz stresses, most customers will opt for efficiency. “The challenge to insurers is to use technology effectively to create efficient systems of care,” he concludes.

In insurance as in other industries, people and machines complement each other and will continue to do so even 50 years from now, according to Jake Diner, CEO of Elafris, the San Francisco-based supplier of an artificial intelligence-powered virtual agent platform. “Some things must be automated because it is cheaper and the results are better, others will still need a human no matter how powerful the AI behind an application,” he says.

When a policyholder’s house is flooded during a hurricane, the last thing they want to discover is that they’re not covered, and having the assistance of an agent may be more likely to ensure they know what they’re getting for their premium, Diner suggests. One the other hand, when a policyholder discovers a broken windshield around 9 p.m., his agent may be putting kids to bed and cannot spend 10 minutes on a phone to file such simple glass claim, so claims automation presents a useful solution. “There are hundreds of examples like that all throughout the industry, and while undoubtedly AI is getting smarter by learning from humans how it should handle different tasks, it will never replace human agents 100 percent of the time,” Diner says. “At Elafris, we constantly seek to learn from customers how to use machines in ways that our human customers love.” In solving that challenge, insurers should be careful not to make of intelligent automation the latest technology “shiny object,” suggests Craig Weber. It would be ironic that in the moment when insurance is making the greatest strides in customer experience it should underestimate the human role in customer engagement.  “Increasing emotional connectivity with customers is a critical challenge for insurers,” Weber advises. “In a crowded marketplace, where products all start to look the same, it is the feeling generated by the service experience that will really stand out.”

“Given the unique and powerful benefits the industry provides to both families and companies, it is a grand shame that insurers do not generate more positive reactions from their customers,” Weber adds. “Decades of focus on product and price have driven the industry toward commoditization, at the expense of emotional connection which human beings crave.”