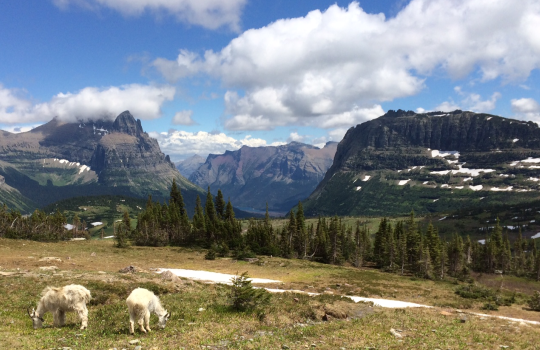 What could be more serene than a spectacular mountain meadow, with ancient peaks in the background and contentedly grazing animals in the foreground? That scene, captured for the reader’s enjoyment, led me into reflections about how the insurance industry is changing, and at what pace.

Last week we reported on State Farm’s “Wrong/Right” commercial implying the advent of a changed industry as the result of IoT-driven risk management. The topic remained on my mind all this week because it was such a staggering acknowledgement by one of the most stolid, conservative and significant companies in the industry. As reader, contributor and insurance technology visionary Ken Hittel remarked in the comments to the story: I think this commercial is to the insurance biz what the classic Apple 1984 ad was to the computer business.

Anyone who wonders whether the industry will undergo real, disruptive change should consider State Farm’s point of view, as expressed in the insurer’s Wrong/Right commercial. The question remains about how  the industry will change. There are hints in this week’s IIR newsletter, with our reports on incremental changes involving insurers adopting modern core systems. Our conversation with Roost CMO David Henry shows how an IoT device vendor is working with insurers to reduce homeowners risk.

Even more significant is our story on Slice Labs’ deal to work with Munich Re. Slice has created an innovative platform to adapt insurance products to the emerging economy realities of the sharing economy. We believe this deal reflects a characteristic pattern identified by Celent analyst Mike Fitzgerald: significant change in this industry will happen on a pattern of collaboration rather than disruption. In this case, Slice found a new way of doing insurance, but in doing so it becomes a partner, not a competitor to a major insurer. We expect to see example after example of this innovation ecosystem, described in Fitzgerald’s work, enabling a new insurance industry. In Fitzgerald’s vision, change is more gradual and incremental, even if the pace of change is greatly accelerated over the past. It also allows for a very nuanced view, in which there is no clear before and after, but a complex emerging picture.

The Nuanced Picture of Insurance’s Future

In this regard, we can’t help thinking about State Farm spokesman Brad Hilliard’s comments on the “Wrong/Right” commercial. Yes, he allowed: State Farm acknowledges diminished risks—such as could reduce auto insurance premium through collision avoidance and autonomous vehicle technology. But Hilliard insisted also on emerging risks that would require insurance as well. That sounded coy, but it is eminently reasonable. People who love to drive will not surrender that passion to machines—at least not all the time. Perhaps traditional auto insurance will coexist with product liability insurance for the performance of part-time autonomous vehicles. Which brings us back to reflection on the serene view we enjoyed this week in Glacier National Park. The mountains themselves are the product of destruction on a colossal scale, albeit on a geological timeline. The virtually domesticated mountain goats belie a challenging environment where plants and animals struggle for survival through every season. In the distance we spied a mother bear and her cub. The survival of neither is guaranteed beyond this generous season, and even during it. And all the hikers and climbers willingly face risks, from sudden changes in weather to the vagaries of the mountains’ crumbly rock. One can only hope that the humans, at least, are insured.