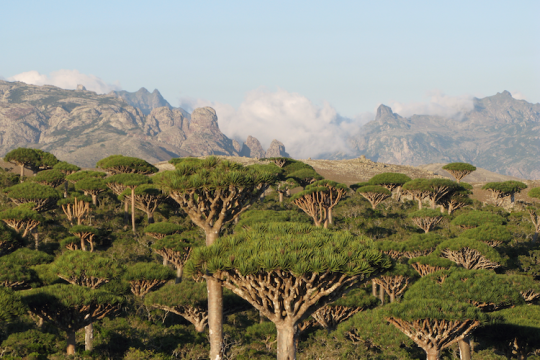 (“Dragon’s Blood” trees on the island of Socotra. Source: NationalYemen.com.)

As an industry outsider taking on the problems of developing insurance core systems, Dan Woods, CEO of startup core system/platform vendor Socotra (San Francisco) says the number one thing missing in the industry is productization. “My definition of a software product is one that I can sell to a competent stranger who can use it effectively from its documentation,” he says.

Woods’ initial challenge at Socotra’s founding in 2014 was to create core systems for a Central African insurance carrier. “A private equity firm was buying up insurance companies and trying to figure out how to manage IT for them,” Woods relates. “Their thought was, ‘We’ll just find the best IT available and bring it to our companies’—but they couldn’t find any.” It’s not that there wasn’t an abundance of packaged software available, but there was none for which the private equity firm could request an evaluation license to explore how the software might work for them. “When I try out Salesforce, I have the power to configure my sales processes during an evaluation period,” Woods says. “You cannot say that of any of the incumbent insurance core system players. they’ll send salespeople with PowerPoints and make long presentations; what they won’t do is say, ‘No problem, here you go—enjoy trying it out.”

“Socotra” was the name of the PE firm’s project to find a suitable IT solution. When Woods’ team took on the task, he decided he liked the name—which refers to an island off the Horn of Africa—and applied it to the new software company he founded.

“It was nine months before the first policy was live on Socotra, and it was another nine months before we could execute a claim—that meant if a customer had a claim the insurer would say, we’re working on it,” Woods recalls. “This was experimentation in live development and rapid prototyping that could not have been done anywhere else.”

Woods stresses Socotra’s having been built as a flexible, configurable platform on cloud-ready technology from the start. “Those capabilities need to be in the product from the beginning—they cannot be added in later,” he says. “Some legacy competitors are discovering that you can’t move to the cloud incrementally.”

Preparing for the Market

Socotra spent its third year learning how to market and sell. “We spent mid-2016 to mid-2017 quietly building our network, and at the end of that year we closed our second customer—Coya [Berlin].”

Within a month of Coya, Socotra won the business of a large global insurer with operations in Australia (Sydney); and life reinsurer RGA (St. Louis). “We may be the first company in history whose first four clients were on four different continents,” comments Woods.

Today Socotra has about a dozen customers and many more in the pipeline, according to Woods. In spring of 2019 Mutual of Omaha selected Socotra to power a new enterprise business platform, citing Socotra’s cloud-native architecture and pluggable/extensible design. Later in 2019, AXA (Paris) came on board as a customer to launch an insurance product for Uber drivers in the U.K. IAG, Australia’s largest insurer, also became a Socotra customer in 2019.

In Dec. 2019, Nationwide (Columbus, Ohio) went public with its selection of Socotra as the core system for Spire, the insurer’s greenfield direct-to-consumer digital insurance platform designed to appeal to Millennials using mobile devices.

While designed, in effect, to solve perennial insurance technology problems, Socotra approaches the market as a partner in helping carriers move incrementally to new technology rather than in big-bang fashion. “We don’t roll into a tier-one carrier and tell them they should rip everything out and move to Socotra,” he explains. “I take inspiration from cloud providers; they don’t say you should throw away your data, but rather, ‘Next time you need a server, call us—not the hardware guy. Next time you need scale, try turning that part over to us.’ Then it’s not some giant effort from day one. After a while you have the majority in the cloud and some servers in the basement that never go away.”

On Jan. 23, 2020, Socotra announced a Series B funding round of $15.2 million, bringing the startup insurance core system/platform vendor’s total capital raised to $33 million, 26 million of which was raised within the last 15 months. [See story here]. The company plans to use the funds to accelerate product maturity and international expansion. “We’re looking to enlarge our Australia office and we will open one in Europe,” Woods reports.

In the coming months and years, Woods says Socotra will continue to develop the features of the product and stress the modern technologies that differentiate Socotra. “Our earlier versions were more modest in terms of features, but aggressive in terms of the fundamentals—continuous upgrades, automatic scaling in the cloud, open RESTful APIs, and being configurable by anyone, to handle any insurance product,” he says. “Everybody says they’re in the cloud, but installing the same stuff and putting it in the cloud is like putting a power generator across the street with an extension cord and calling it a grid.”