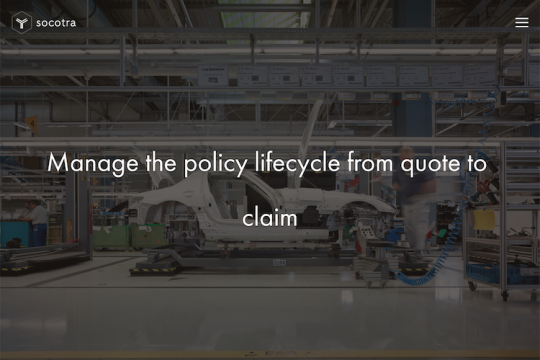 Socotra (San Francisco) has announced the closing of a Series B funding round of $15.2 million, bringing the startup insurance core system/platform vendor’s total capital raised to $33 million, with $26 million raised within the last 15 months. The round was led by early-stage venture firm Brewer Lane (Weston, Mass.), with participation from Portag3 (Toronto), 8VC (San Francisco) and MS&AD (Tokyo). As part of the round, Brewer Lane founder and managing partner John Kim will be joining Socotra’s Board of Directors. Kim was formerly President and Chief Investment Officer of New York Life (New York). “This is an exciting time as Socotra’s momentum continues to accelerate,” comments Dan Woods, CEO, Socotra. “Brewer Lane Ventures and Portag3 Ventures have remarkably deep insurance expertise, so they immediately recognized what Socotra means for the insurance industry. This additional funding will further accelerate our product development, and our continued growth in the U.S., Europe, and Australia. Finally, we’re excited to benefit from John Kim’s insights and deep industry experience as he joins our board of directors.”

Founded in 2014, Socotra describes itself is the only cloud-native core platform that makes it easy for insurers to rapidly design and deploy new products in a cost-effective manner to better serve their customers. The vendor has roughly a dozen current customers, including major insurers such as Nationwide and Mutual of Omaha, with many more in the pipeline, according to Woods.

Socotra’s first customer was a central-African insurer, which gave the company the opportunity to build out its product. Following that engagement, Socotra’s next customers were Coya (Berlin); a large global insurer with operations in Australia (Sydney); and life reinsurer RGA (St. Louis). “We may be the first company in history whose first four clients were on four different continents,” comments Woods.