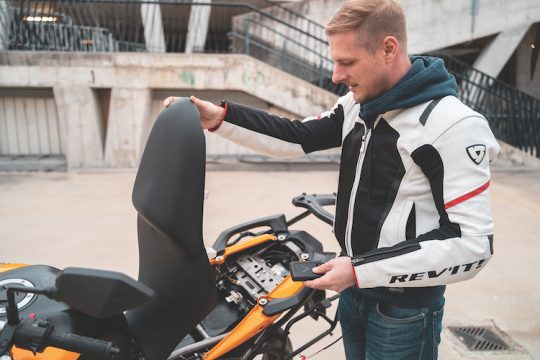 While working to create safety features for motorcycles, a Ljubljana, Slovenia-based Movalyse had a test motorcycle stolen from a locked garage. The incident led down a path of innovation resulting the creation of VIGO, a next-generation telematics usage-based motorcycle insurance, which launched in partnership with carrier Sava Insurance (Zavarovalnica Sava, Ljubljana) in spring of 2019. The new UBI model, which stresses trust and engagement with the policyholder, captured 4.5 percent of the motorcycle insurance market within four months. VIGO the name of both the product and the insurance distribution firm, seeks to expand first in the European Union and then to other markets. Movalese called the police when its motorcycle was stolen, but to no avail. The vehicle wasn’t insured because premiums were prohibitively high, according to Rok Upelj, the company’s co-founder. Movalyse subsequently conducted a survey of motorcyclists and found that their highest priorities were safety and theft prevention. “That’s when the idea for VIGO was born,” Upelj says.

Guardian Angel on the Road

Movalese worked with Sava Insurance to create and insurance product that combined with its safety and anti-theft capabilities. VIGO insurance offers more personalized premiums, monitoring of driving patterns and insights yielded by analyzing recorded data. Upon binding of a new policy, VIGO sends policyholders the Vigobox—a small device implemented on the policyholder’s motorcycle—which interacts with the Vigoapp. The app records the vehicle’s location 24/7 and if the vehicle is moved, the user receives notification. VIGO uses a telematics scoring system to support a pay-as-you-drive insurance model. “The three elements of Vigobox, Vigoapp and the insurance policy work closely together and represent the most optimal insurance for the end-user and his vehicle,” comments Upelj. “Because of the innovative platform, Sava and our team can directly communicate with the end-user, and vice versa. In case the client has any technical difficulties or any other questions regarding Vigo, we are also available by email and phone call. We also established a Vigo Community on our online portals, and the users see Vigo as their guardian angel on the road.”

In addition to tracking a motorcycle’s geographical position, the Vigobox’s sensors can detect when the motorcycle’s rider has an accident. When that happens, the app will initiate communication to determine whether the rider is responsive. In the absence of a response from the rider, a server located at Movalyse’s headquarters HQ, activates an SOS call center, which is available 24/7. The call center will send an ambulance to the accident’s location. The app also triggers automated claims processing.

“Increasing the safety of motorcyclists is at the forefront of our vision, as they are considered one of the most vulnerable categories of drivers,” notes Upelj. “In Slovenia, no VIGO users have had their motorcycles stolen, and with shorter reaction time in case of accident lives have been saved.”

VIGO insurance is available in Slovenia and Croatia and is valid across Europe. “We are already in talks with several insurers in other European markets to develop partnerships,” Upelj says. “We are also striving to enter the international market because we are sure that with VIGO, the safety of motorcyclists will increase.”

Many consumers think of telematic motorcycle insurance as only tracking and recording users riding patterns in order to provide insights to the insurance company—which is a deal-breaker for many according to Rinalda Klemenčič, Director of Innovation and Strategic Marketing, Sava Insurance. “We were looking for a solution which would secure the client and his data, as well as efficiently insure him and his motorcycle,” she says. “At Sava, we understand digitalization as being connected and oriented to the end-users’ needs. We aimed to make a step towards opening up new communication channels for our clients through digitalization. We managed to make the first step towards this goal with VIGO, which enables personalization and a quality direct communication with our clients. This strengthens the relationship with them, increasing trust. We are glad to see that Vigo users feel safer on the road and that they see Vigo as a guardian.”