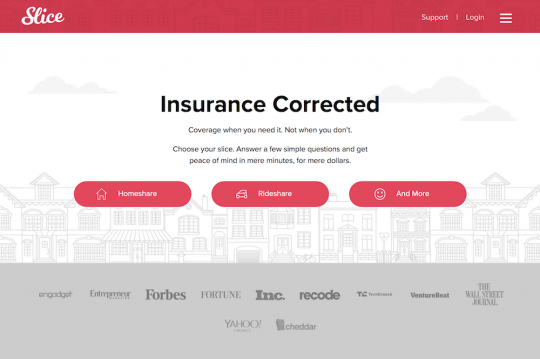 Slice Labs Inc., an InsurTech startup that has created an on-demand insurance platform in the United States, has closed a Series A investment round of $11.6M led by XL Innovate, with participation from Horizons Ventures, Munich Re / HSB Ventures, SOMPO, Plug and Play, and Tusk Ventures. Slice reports that the financing will be used to scale its on-demand offering for new products and jurisdictions, and to accelerate the deployment of its On-Demand Digital Insurance Platform via marquee partnerships. In early 2016 Slice launched its insurance distribution platform, which is designed to address the emerging risks of the on-demand, sharing economy market, such as homes and autos for homesharing and ridesharing. Prior to its launch, the company raised $3.9 million in a seed round led by Horizons Ventures and XL Innovate. Slice describes its platform as a cloud-based insurance solution that leverages algorithms and data to dramatically lower the cost of issuing policies, increase automation around claims, and reduce claims fraud and loss.

Slice reports that it intends to scale further by offering its On-Demand Digital Insurance Platform directly to large insurance carriers globally as a full insurance-as-a-service solution. The company describes the Slice platform as a fully operating insurance entity that includes pricing, ratings, licensing, underwriting, servicing, and capacity. Slice claims that insurers can easily integrate the platform to quickly deploy insurance products for the new economy that perform vastly better, offer deeper customer engagement, and present a wider array of options for consumers. “With Slice, leading carriers can leapfrog competitors and offer a best-in-class, turnkey digital experience to address the newest class of assets and opportunities,” a company statement says.

Potential to Completely Disrupt How Insurance is Bought and Sold “We are proud to stand behind Slice and lead their latest fundraising round,” comments Tom Hutton, Managing Partner of XL Innovate. “Slice is truly one of the most exciting companies in insurance technology that we’ve seen to date. We believe the on-demand platform and technology offered by Slice has immense potential to completely disrupt how insurance is bought and sold, not just within the sharing economy, but globally and across the board.”

“We couldn’t be more eager to accelerate our go-to-market strategy with the support of such a strong group of investors bringing their strategic and financial expertise to the table,” comments Tim Attia, CEO, Slice. “This is critical as we move to the next phase in the development of the company, which will be to scale and show traction both in the direct market and through strategic partnerships.”

Slice reports that since officially launching its first product offering to homeshare hosts (on platforms such as Airbnb and Homeaway) in October 2016, the company has experienced double-digit monthly revenue growth and is now providing homeshare coverage in 26 states across the U.S., reaching over 70 percent of the U.S. population, and 82 percent of the homeshare market. The company plans to have its homeshare product in all 50 states by the end of 2017. Slice says that its rideshare product is in testing mode and will be launched soon. The company adds that it has continued to enhance its products and technology in preparation of significant volume from partners.