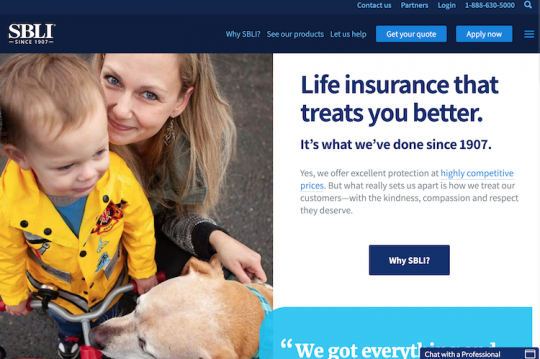 The Savings Bank Life Insurance Company of Massachusetts (SBLI; Woburn, Mass.) was one of many insurers in the United States and Canada who were forced to seek a new compensation management system when SunGard announced in 2016 that it would no longer support its Enterprise Incentive Management (EIM) system. While looking for a replacement system, the insurer attended a demo of VUE Software’s (Coconut Creek, Fla.) compensation system and ended up increasing the scope of its project to include other components of the VUE Distribution Management Platform. “SBLI chose to partner with VUE Software because of the level of personalized services and attention they are able to provide to our business,” comments Jim Morgan, CEO, SBLI. “VUE takes the time to understand our needs and collaborates with us to provide the most accurate and convenient commission technology to our expanding number of Life Insurance and Annity distribution partners.”

When SunGard announced retirement of support of its EIM commission paying software application (known to many insurers DSPA and FASAT), many insurance clients were left at risk especially where future growth plans might be affected. As one of these, SBLI sought a new flexible system from an established industry vendor with financial stability and a demonstrated interest in continued innovation for the insurance industry.

As the SBLI prepared for the selection process, it identified several specific business requirements for a replacement system, including the following:

VUE Software met SBLI’s vendor criteria, and the insurer invited the insurer to demonstrate its solution. As part of a proof of concept (PoC) exercise, VUE was tasked to demonstrate use cases with appropriate complexity to verify that the vendor had adequate knowledge of the FASAT System and SBLI’s business model and processes.

SBLI was impressed with VUE’s deep domain expertise and the overall architecture of VUE’s commission management module that manages extremely complex commission events. The insurer also learned about other aspects of VUE’s capabilities. For example, VUE Onboarding & Compliance, which delivers straight-through processing throughout the agent lifecycle and ensures regulatory compliance, according to the vendor. VUE’s N-tier hierarchy also played a part in SBLI’s decision to acquire the entire VUE Distribution Management Platform.

SBLI then jointly planned implementation of the Platform with VUE, providing for pre-configured integrations to many standard insurance industry information providers, and integrating with SBLI’s systems.

The implementation will support business growth by with an automated invitation process onboard producers and complete the onboarding process within hours instead of weeks, according to the vendor.  SBLI will also be able to contract producers quickly and set up a “just in time” appointment status if required. The VUE system also enables the user to maintain a higher level of producer licensing and appointment compliance.

Reducing Dependence on IT Resources

The VUE platform meets SBLI’s flexibility criterion by putting significant system configuration capability in the hands of business users reducing the reliance on IT resources for system changes such as new commission or incentive plans, hierarchy maintenance, new screens or reports, document distribution, among others. To the extent that IT manages the solution, the software application itself gives the user the ability to add new products, commission and incentive plans, or add a new distribution channel very quickly. SBLI also now has the ability to change commission plans faster, or introduce new commission plan models.

From the point of view of SBLI’s ability to satisfy the demands of the parties involved in delivering new growth, the implementation has raised the level of producer and business user satisfaction. On the agent side, it gives improved visibility to producers with consolidated statements, and on the management side, it provides the flexibility to change or introduce new incentive models. Among the functional specifics delivered by the implementation, VUE lists the following:

In overall terms of business capabilities, SBLI is now able to create multi-layered hierarchies and bonus structures with greater automation and accuracy in commission payments. The insurer’s producers and agencies can access their Book of Business (BOB) and commission information with 24/7/365 web access. SBLI’s internal operations can make changes to their business processes without writing code, which saves time and money while meeting or exceeding user expectations internally and among producers. Also, notifications from the NIPR’s PDB regarding licensing renewals and compliance issues are now easily resolved.

“It really has been a pleasure partnering with the SBLI team,” comments Jeff Sloan, VP of Sales for North America, VUE Software. “Our deep understanding of insurance and our feature rich distribution management platform gives SBLI the tools to modernize and continue to grow as a leading life insurance organization.”