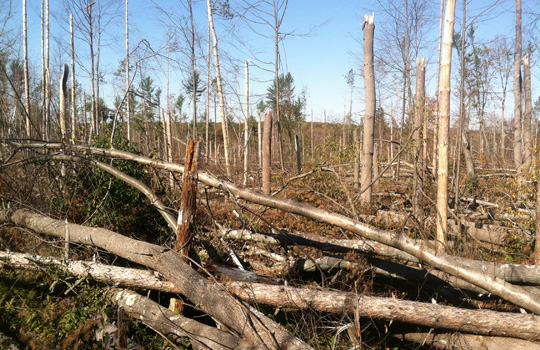 Locals say that Oak Ridge, N.J. resident Bruce Latteri spent the early evening of Oct. 29, 2012 – the day Hurricane Sandy made landfall in New Jersey – at a friend’s house, after a tree came down in his yard. Though worried about the continuing storm, he returned home due to concern about his dog. Before morning, he was killed by a second falling tree which struck his home as he sat at the kitchen table. While some of the most dramatic effects of Sandy were coastal, Latteri’s death – one of several associated with tree fall during the storm – was representative of a Sandy as a windstorm that resulted in multiple deaths and billions of dollars in insured losses.

Some of the more spectacular effects of Superstorm Sandy, which came ashore at Brigantine, N.J., were due to storm surge-related effects. After the storm, numerous videos appeared showing flooded streets, Subway stations and parking lots; before/after shots show how the rising sea altered the landscape, in some cases permanently. However, in terms of insurance losses, Sandy was far and away a windstorm event, and one whose effects covered a massive swath of New Jersey and New York.

Mr. Latteri’s house was located well inland, roughly 40 miles from any coastal water. The highland region within which Oak Ridge sits, was struck by microbursts that flattened whole areas of forest.

All in all, Sandy affected 16 states between Oct. 28 and 31, 2012, and caused about $18.8 billion dollars in privately insured losses associated with 1.5 million claims, according to ISO’s PCS unit. Overall economic losses were in the range of $50 billion, according to Jeanne Salvatore, senior VP of public affairs, Insurance Information Institute (III), in a presentation to the Insurance Council of New Jersey’s 36th Annual Meeting & Conference on Friday, Oct. 18, 2013, in Hamilton, N.J. New York and New Jersey bore the brunt of insured losses, by far, with $9.7 billion and $6.3 billion respectively, according to Salvatore.

“Limbs or entire trees blowing down were by far the largest peril that affected our home exposure,” relates Eric Stenson, a spokesman for New Jersey Manufacturers Insurance (NJM, West Trenton, N.J.). “There were a lot of old growth and other large trees coming down and wreaking a lot of havoc.”

NJM, which does 98 percent of its business in New Jersey, received over 56,000 Sandy-related claims, about 84 percent of which were for homes. “Our auto claims were mostly for flood damaged vehicles,” Stenson notes. “We had homeowners claims in every county in New Jersey.” 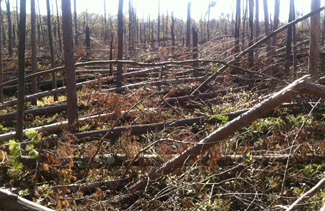 Devastated forest in Oak Ridge, N.J., just north of where Bruce Latteri was killed by a tree falling on his house.

reported about 40,000 claims total in New Jersey, with only about 6,000 of those flood related, according to Danny Jovic, a spokesman for Allstate N.J. “A significant number of those claims were property and auto,” he says. While Jovic declined to talk specifics of the geographic range of claims Allstate received in the Garden State, he comments that, “I can tell you that there was a lot of devastation.”

Superstorm Sandy killed over 280 people from the Caribbean to Canada, with over 100 in the United States and 40 in New Jersey alone. Those deaths were representative of tragedies throughout the landfall area, and included drowning and hypothermia related to flooding. In the interior, flooding caused power outages that led to death by hypothermia, typically involving older people. Wind related incidents also resulted power problems that caused hypothermia and electrocution, and several deaths were attributable either directly to falling trees or were associated with efforts to clear them.