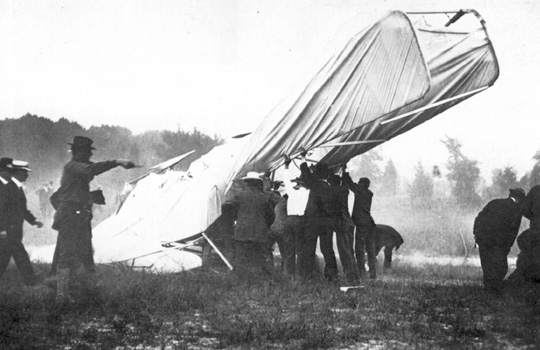 (Wright brothers’ plane crashes in 1908, killing a passenger and seriously injuring Orville Wright. Time to give up on this human flight nonsense?)

“Many people would learn from their mistakes if they weren’t so busy denying them.” –  J. Harold Smith

We have an unhealthy relationship with mistakes and failure.

On paper, embracing failure seems like a no-brainer but our own often-emotional response gets in the way. One of my early corporate failures still has me cringe when I think about it. As a young manager in my twenties eager to impress, I took it upon myself to critique a strategy that was the brainchild of a senior executive. The response was a public lambasting that had me taking the afternoon off to go hide in shame. It was a spectacular failure on my part to understand politics and my role in the organization. There was so much learning in there for me but it took me several weeks to recover before I could see the learning.

What is it about failure we find so hard to coexist with?

There myriad examples of brilliant people who had to fail before finding their way.  Abraham Lincoln was defeated in 26 campaigns he made for public office. Harland David Sanders, better known as Colonel Sanders of Kentucky Fried Chicken fame, had his famous secret chicken recipe rejected 1,009 times before a restaurant accepted it. The singer, dancer and actor Fred Astaire was told at his first screen test that “Can’t act. Can’t sing. Slightly bald. Not handsome. Can dance a little.”

Such clear examples of perseverance in the face of failure should inspire us to embrace failure but it doesn’t. Neuroscience points out that we are programmed in our reptilian brain to avoid failure as a means of survival – a very useful skill when hunting sabre tooth tigers. So we need to accept that our initial response in the moment is instinctive. But the choice to let failure hang over us like a dark cloud for days or months is our own. It’s our choice to play a smaller game and take fewer risks after a mistake.

Martin Seligman, an advocate of positive psychology, talks about trauma being a “fork in the road that enhances the appreciation of paradox.” He remarks that, “loss and gain both happen; grief and gratitude both happen; vulnerability and strength both happen.” While he’s referring to trauma, his observations apply to mistakes and failures as well.

I talk about failure with my corporate coaching clients – the topic comes up frequently. Through this work it has become clear to me that we need to shift our perspective on failure. We can’t avoid making mistakes so let’s learn to look at them through a different lens and apply their lessons constructively.

Take a small time out to reflect on what happened. Don’t avoid the reality. If it’s happened, own it. As a species, we are remarkably creative in passing the buck or just sticking our heads in the sand with our mistakes. Create a small space to process what’s happened. Go for a run or walk the dog – be conscious and intentional in acknowledging and learning from what happened (see next point).

View failure as a data gathering process. A mistake or failure gives you more information than you had before. It will highlight where your assumptions are incorrect, the weaknesses in a thought process, or where the data we had was just plain wrong. Google’s approach to early releases of products takes this view leveraging early adopter feedback to improve (or withdraw) the product. Let’s see our mistakes as feedback in a beta release cycle.

Your failure is not you. Failure can be a hard lesson but it doesn’t mean you are a failure. In my case of a youthful misunderstanding of corporate politics, I believed for several weeks that I was an idiot and a fool. I judged myself harshly. I made my actions a measure of my character. Self-flagellation may seem admirable but it’s destructive. Stop it.

As leaders and managers, we take risks all the time and with those risks come a chance of mistakes. Failure doesn’t always lead to success, but success will surely not be achieved without a degree of failure. Let us continue to play our best game and to choose not to have failure make us play small.