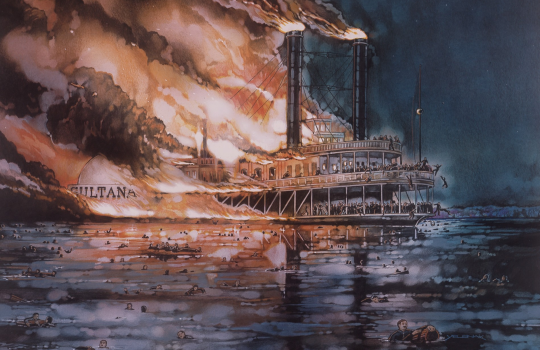 (Artist’s rendition of the Sultana Disaster near Memphis on April 27, 2015. Image courtesy of HSB.)

April 27, 2015 marked the 150th anniversary of the worst maritime disaster in American history. In 1865, a riverboat called the Sultana overloaded with freed Union prisoners of war sank after its steam boilers exploded. The event inspired members of the Hartford-based Polytechnic Club, formed shortly before the war, to reunite and found the Hartford Steam Boiler Insurance and Inspection Company (HSB, Hartford; a Munich Re company) the following year. The Club’s members included Francis A. Pratt and Amos Whitney the founders of the Pratt & Whitney, and Elisha Root, president of Colt’s Patent Firearms Manufacturing Co., as well as Jeremiah M. Allen, founder and first president of HSB. During the past week, HSB announced a $500,000 investment in Waygum, Inc., provider of a platform for monitoring Internet of Things communications in an industrial context. While the Internet of Things may seem worlds away from steam engines, the investment represents continuity in HSB’s mission of working collaboratively with industry toward the mutually beneficial goal of reducing risks and their related losses. Insurance Innovation Reporter talked with HSB’s CEO Greg Barats about the Waygum investment’s strategic significance as the first of several investments related to the emerging industrial significance of the Internet of Things. 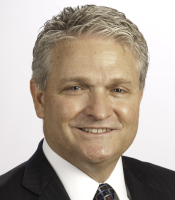 Insurance Innovation Reporter: You’re in Memphis to mark the anniversary of the Sultana disaster. Tell us about the relationship between that event and Hartford Steam Boiler’s founding.

Greg Barats, HSB: It’s a very moving story that is that unfortunately not well known. The Sultana was a steam ship carrying prisoners of war back to their families at end of Civil War. During course of voyage up the Mississippi, the vessel’s boilers exploded killing some people immediately and causing a fire to start. Of 2,400 passengers approximately 1,800 perished. Many were POW’s from Andersonville and other Confederate prison camps who were too weak to swim. More souls perished in this disaster than in the sinking of the Titanic. But because it occurred within two weeks of President Lincoln’s assassination and the day after John Wilkes Booth was killed while fleeing, it became a footnote in the news.

While the disaster was overshadowed by other events, it made a powerful impression on members of Polytechnic Club. The Club was founded in 1857 to seek answers to pressing technical issues. Steam Boilers were of particular interest because they were core to the Industrial Revolution. They also regularly exploded—at a rate of one every four days. Many industries simply took for granted that these explosions would happen, causing death, serious injury and destruction of property. The Club disbanded at the start of the Civil War and went back to their companies, Hartford being an industrial center of importance to the Union.

After the war, two members of the Club, were deeply moved by the Sultana disaster and resurrected their previous conversation. They became focused on setting standards for steam boiler construction and maintenance, and they developed a model that combined inspection and risk transfer.

At HSB, we’ve never forgotten the Sultana. Our 150th anniversary is next year, and we’ve told the story generation after generation. It gets to the core of who we are as engineers and scientists solving problems, and the first company in the U.S. based on safety. That was the most pressing industrial issue of its time, and we’ve evolved from there through three industrial revolutions: steam, electricity and then information technology and software. Now we’re positioned for the fourth.

IIR: That brings us to HSB’s $500,000 investment in Waygum, Inc, announced a few days ago. Tell us a little about that company and why HSB has invested in it.

GB: Waygum has developed a mobile app for the Internet of Things, which connects a wide range of equipment and devices together through IT platforms, sensors and other mechanisms that network the entire system together like a single piece of a equipment. The Waygum app gives decision-makers a range of functionality on a mobile device to monitor machines and other equipment in real time and to manage inventory. It lets users quickly see if there are problems with equipment or a facility, with the goal of optimizing performance and minimizing risk exposure.

IIR: HSB’s announcement of the Waygum investment characterized it as an early investment for the venture capital group formed by HSB last year. What’s the longer-term vision?

IIR: What kinds of companies will you be investing in?

GB: They could be analytics companies, sensor companies, producers of software tools, or individual diagnostic tools, for example.

GB: Absolutely—it brings us from static checks to real-time monitoring. It will be closely linked to optimizing plant facilities and preventing losses, such as those from equipment breakdowns and fires. With the Waygum app, you could collect hundreds of types of information and have it all in your hand.

IIR: So Waygum is a general kind of platform that could be adapted to many purposes, many plants within different industries with widely different equipment?

GB: Yes, different concerns but the same level of insight and control. It functions somewhat like a universal remote control. Waygum would be intercepting all the various applications within an industrial facility into one monitoring and control platform.

GB: The Internet of Things will increase in importance as we have more integration between things. Manufacturers of all sorts of products are moving in this direction to supply appliances with connectivity and the ability to transmit data remotely to notify users of problems and enable them to solve them. It will proliferate with time and will change the landscape of insurance, creating the possibility of new products and services.

IIR: It seems that this trend, along with a few others, such as the maturing of data analytics, is moving more quickly than many technology trends in the past. It’s an exciting time to be involved with insurance-related technology.

GB: I couldn’t agree more. That’s at the core of why we established our venture capital group. There is tremendous potential for change, which can be disruptive and frightening—especially for a traditionally conservative industry. But we believe it’s imperative to get off the bleachers, onto the playing field and engaged with these new capabilities.

IIR: That sentiment sounds very much in keeping with the spirit of HSB’s founders. How would you relate the company’s Internet of things-focused investment initiative to the company’s roots?

GB: Here in Memphis observing the anniversary of the Sultana disaster, there’s a lively sense of HSB’s legacy. We’ve been through a great deal of change, moving from boilers to electricity to anything that consumes energy. We’ve evolved as industry has evolved. Things are moving faster now and the adoption of Internet of Things-related technology is rapidly becoming very important in our space. There’s an old saying: You have to have a strong understanding of where you came from to truly understand your future. The Sultana reminds us of where we came from, but we always have an eye to the future.