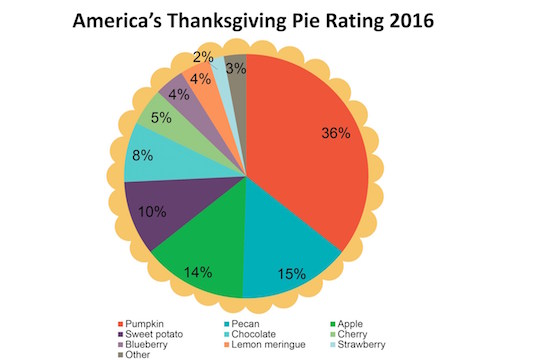 In an example of how insurers can use analytics for gaining crucial insights, the Delta Dental Plans Association (Oak Brook, Ill.) has published the results of its 2016 Thanksgiving Pie Ranking Report. Pumpkin once again reigns supreme as America’s favorite Thanksgiving dessert, beating out other traditional pies by a wide margin. Favorability of pumpkin pie hovers around 36 percent with American adults, more than double that of American’s next favorite Thanksgiving pie, pecan (15 percent), according to the insurer.

The Delta Dental Plans Association Fall 2016 Survey conducted the survey between October 18 and October 25, 2016 among a nationally representative sample of 1,009 Americans 18+. The margin of error is +/- 3.1 percent.