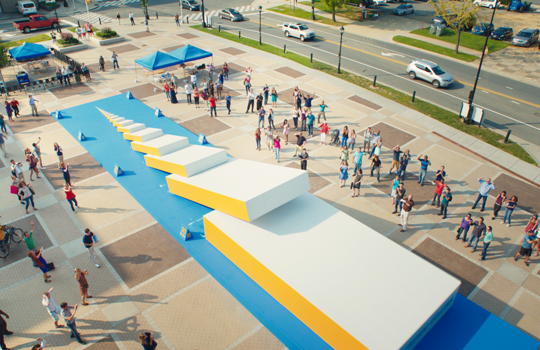 In “Dominoes,” the latest of a series of ads about the importance of saving for retirement, Prudential filmed what it called a live, crowd-sourced experiment that illustrates the power small investments can have on retirement (see embedded video below). Pru’s stunt suggests a path to a new kind of customer engagement that can power growth through addressing the problem of under-insurance.

The life and annuities provider toppled a 30-foot-tall domino stone starting with a normal-size domino, to convey the long-term outcome of consistent retirement investing. In the visually appealing stunt, Pru not broke the Guinness world record for the tallest domino stone ever toppled, but it also broke through the average person’s limited mathematical acumen through intuitive demonstration. Other insurers would do well to take inspiration, not just for their ads, but also for how they explain the proposition they’re offering to consumers in various venues, and how they can improve the efficacy of the customer interface.

The general public doesn’t understand insurance, whether one is talking about property protection, life insurance, health insurance or annuities. The natural bias toward self-interest is one reason: policyholders want to minimize their premium payments, but they are often surprised to learn the limitations of their coverage once they’ve made a claim.

Uninformed prejudice about what things cost can be a factor. For example, the LIMRA Life Happens study found that people under 25 tended to overestimate the price for a $250,000 level-term policy for a healthy 30-year-old by 10 times its actual cost. Nearly 20 percent overestimated the cost by 30 times. The research, conducted by associate professor Uzma Khan and graduate student Daniella Kupor, asked participants to choose between a contest in which they could win a car and one in which they could win either a car or one of several smaller prices, such as iPads, gift certificates, T-shirts and hats. Since all else is equal, a Stanford statement notes, it makes sense that the second contest offering would be more enticing: there are more prizes to win, so objectively it should be a more valuable prospect. In fact, people tended to find the promotion offering only the car more valuable. Stanford reports:

Across a series of experiments, Khan and Kupor found that the addition of smaller prospects (winning those iPads and T-shirts) actually makes the larger prospect (winning the car) seem less likely. And since it seems less likely that you’ll win that car, the whole promotion appears less valuable to you. In short, the common marketing practice of throwing the kitchen sink into a promotion in order to make it seem more valuable is counterproductive.

According to Kahn, this tendency of the mind to see the value of the larger prize “atrophy” tends to become a “cognitive shortcut” that people tend to overapply in the assessment of risk/reward outcomes.

She identifies two key elements to understanding value atrophy: first, that the effect arises only when smaller prospects are added to a larger one; and second, that the phenomenon only occurs in probabilistic contexts where the outcome is uncertain. Khan further found that value atrophy occurs in both positive and negative scenarios, affecting the accuracy of assessments of both threat and benefit.

In one study, participants were told they were on a trip to Guatemala and asked to think about buying travel insurance:

They then had to decide how much they would pay for two different types of insurance: one that covered the cost of treating serious injury while abroad, and one that offered the same level of coverage as well as the costs of minor cold and flu. The results found that people were willing to pay more for the insurance that covered only serious injury. In other words, the mere addition of the smaller prospects to the larger one actually reduced people’s willingness to pay for what is objectively a better product.

Another experiment asked participants to make a choice between two drugs, one that could help hypertension, though with some side effects. Half of the participants were told that the drug could increase the likelihood of cancer, while the other half were told that it could increase the likelihood not only of cancer, but also other, milder symptoms: dizziness, cold hands and feet, asthma, tremor and/or insomnia. The participants found the drug with multiple side effects to be less threatening, even though it presented a greater probability of a bad outcome.

Khan believes that these effects of value atrophy could have the most important implications for healthcare, but its significance for insurance is clear also:

…consider the insurance industry, which is built on the very sophisticated pricing of risk, where people could be unwittingly exposing themselves to substantial danger. Imagine a homeowner who is less likely to purchase home insurance if providers describe the minor incidents that can happen in addition to the serious damages that might occur.

From one standpoint, the Stanford research simply underscores the difficulties that insurers may face in educating the public about the benefits of their products. On the other hand, they show the wisdom of efforts such as Prudential’s Dominoes ad, or the wisdom of applying gamification and other techniques, such as those deployed by Pru’s IncomeCertainty.com site.

Insurers in fact have an enormous opportunity at a time when the younger generation is particularly anxious about their financial well-being and people increasingly live their economic lives through interaction with a virtual interface. Research this author has previewed indicates that customers are increasingly curious about the relationship of a covered risk to the premium charged. While their curiosity may arise from skepticism about their insurers methods and motives, they are nonetheless primed for a conversation about how insurance really works. These developments, taken together, should be understood by insurers as a potential breakthrough in the way that insurers relate to policyholders and the public generally. They should address the opportunity with an understanding that consumers – especially younger ones – remain distrustful of financial institutions. And thus insurers should understand that they need to embrace the concept of being not merely trusted advisors but also trustworthy advisors. A commitment to accuracy is indispensable when representing an insurance proposition in an intuitive manner. If the assumption is that consumers are unlikely to understand the actual math, then the patterns offered for recognition must be accurate: the dominoes, in this case, must represent real proportions.

This only means that, in most cases, insurers should simply take their own rhetoric more seriously. They should do this for ethical reasons, of course, but they should also recognize how they stand to benefit. The public remains seriously under-insured. Penetration of the potential individual life insurance remains at a 50-year low; and while more consumers have coverage for auto and home, it tends to hew toward the mandatory level, leaving them under-insured even for those assets, to say nothing of other property which is not covered in the case of loss.

The mission, then, is for insurers to better understand where consumers lack coverage, and to use the best tools available to reach customers where they are, and embrace the role of protection consultant in the marketplace. That role will empower insurers to sell more of their traditional coverages, but it will also be vital in selling new protection products tailored to new appetites as well as new risk management and loss control services enabled by the emergence of cheap M2M technology.