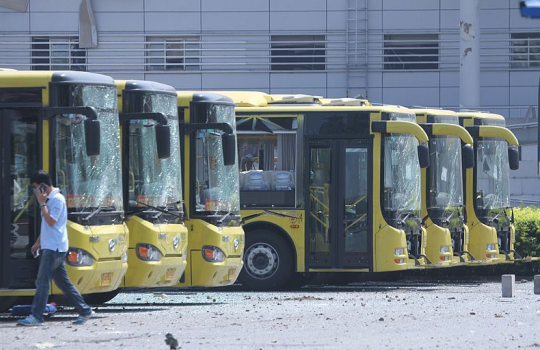 (Buses damaged by the 2015 Tianjin Explosion. Source: Voice of America.)

Allianz recently released its fifth annual Risk Barometer, which polled over 800 risk experts to identify today’s top corporate perils. Well before Allianz released its 2016 report, it was understood that we’re in a time of unprecedented risk, largely due to the interconnectivity of the world. Take for example the impact of the Tianjin explosion in China and Thai floods on global production. The impact of those events continued to surge over time, having a chain reaction far beyond their place of occurrence.

The world’s interconnectedness is also apparent in the free flow of information across borders, brought vividly to light in the big stories of 2015 including terrorists using social media for recruitment and migrants holding-up phones to get a signal as they landed from perilous journeys to sanctuary.

While in a business context this freedom of information flow has its clear benefits, a downside exists whereby the impact of cyber-risk is increased and other risks have emerged. Case in point: Cyber risk is now surpassing the risk of natural catastrophes as a more critical threat in many reports, including the Allianz Risk Barometer.It’s no surprise then, given this backdrop, that the fear of a massive ripple effect across the global supply chain is uppermost in the market’s collective mind.

A Look at the Most Prominent Threats

The Risk Barometer highlights two primary types of threat: Those intrinsic to the market (think: regulation, over supply, competition, stagnation, internal IT competence), and those that arise from the market served (such as: business interruption, cyber, environmental and so on).

Interestingly, cyber risk crosses the boundary and affects both internal organizational risk and external risk being underwritten by insurers – a duality evidenced by the actions of Lloyd’s recently.  On the one hand, Lloyd’s sent a survey to all market participants asking how Managing Agents are dealing with internal cyber risk.  On the other, Lloyd’s have just announced a modelling initiative in collaboration with RMS and AIR to determine what data should be captured to model insurance related to cyber risk.

However, if I were pushed on my view of the most significant threat to the market, I can’t help but think that a market ‘bubble’ is the most prominent.  The capacity available to the marketplace has never been greater, a capacity flowing from investors struggling to find a decent return in other investment arenas due to a flat market and low interest rate economy. This imbalance of supply and demand is driving ever lower insurance rates and an ever increasing risk appetite.  The benign period in terms of natural catastrophe is certainly helping fuel an irrational optimism.

There are two primary ways insurers can protect themselves with technology: The paths of simplification and analytics.

In terms of simplification, many insurers’ operations are built upon a complex web of interconnected systems, a situation that is often the result of multiple acquisitions but can also be the consequence of under-investment or complacency. This fragmentation creates an inherent risk and also disperses information across the business, which means that information becomes difficult to analyze.

In regard to analytics, data is available throughout our interconnected world.  This data can be culled from both within insurer systems but also from outside an insurer’s walls. As the mass of data available continues to increase in number and sophistication, largely driven by the Internet of Things, it’s critical that this flood of data is harnessed by insurers to shine a light in the so-called darkened room. However, it appears only a limited sub-set is being brought to bear. This is surely a missed opportunity.

Other Risk Factors to Bear in Mind

I have been asked whether the Risk Barometer report is potentially not highlighting other global risks.  It feels to me that the Allianz report doesn’t highlight those changes that are massive but slow moving—things like climate change, for example. This is not surprising but appears to miss a big risk component. While these risk factors are perhaps less vivid due to their slow but continuous pace of change, they do far outweigh the point risk of a fire or explosion.  Climate change is all pervasive and has massive potential consequence.

The immigration crisis is another factor that will undoubtedly have massive global consequences in the short term—it will lead to political change (Angela Merkel is dividing opinion in Germany and the news is awash with the threat of border controls) and has the potential to boil over into greater terrorist and military conflict. The effects of these will be felt for years to come and will most certainly lead to a different insurance landscape.

In a world plagued by immense risk, it’s tricky to rank and focus on only 10. As the risk landscape continues to evolve and businesses continue to face new and changing disruptive forces, technology plays a critical role in making our interconnected world feel a bit smaller.

The intuitive analysis of the mass of data, built upon a landscape of greater systems simplicity can help the insurance community mitigate some of the risks highlighted in this fascinating report into our complex world and unpredictable climate.