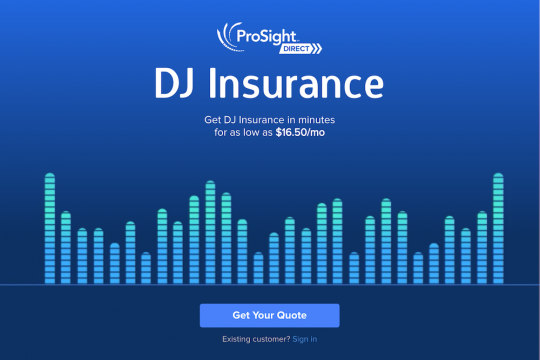 ProSight Specialty Insurance (Morristown, N.J.) has launched ProSight Direct, a platform that that enables prospective customers to purchase insurance through a streamlined, easy-to-use application. Superficially, the announcement resembles many other direct insurance plays, but the announcement represents something different than the latest distribution InsurTech or incumbent front-end play. While notable simply for direct sales of a specialty line of business—in this case insurance for DJs—the debut of platform represents the culmination of a build of modern, end-to-end capabilities from the ground up, within a startup insurance carrier. It also represents a starting point, from which the insurer will soon launch other lines of business. ProSight vaunts the new platform as representing a unique combination of innovative technology and traditional insurance acumen. ProSight Direct’s process eschews jargon and focuses on clear, plain-language questions about prospects’ needs as small business professionals. The debut line of business—DJ insurance—was chosen because ProSight is a leader in insurance for live entertainment, and already represents 50 of the top 100 DJs globally. However, the platform further embodies knowledge of the segment by aiming at an underserved market of smaller DJ customers.

Joe Beneducci, CEO of ProSight, characterizes the launch of ProSight Direct as an expression of a curriculum the firm’s leadership has been building out since starting the firm in 2011. ProSight was founded as a company dedicated to addressing rapidly evolving consumer expectations that exceeded insurers traditional contract-focused business processes. “The only way to address these emerging demands was to build the entire environment—the culture, the technology—of how we underwrite and handle claims, with the customer at the center,” Beneducci comments.

Darryl Siry, ProSight’s Chief Digital Officer and technology head, reports that the insurer’s systems environment includes Duck Creek’s (Boston) policy administration and billing core systems on the back end, and the company’s proprietary technology on the front end and integration layers. “We spent a lot of time building the middle layer, which enables the front end to communicate effectively with core systems,” he notes.

ProSight has deliberately kept a low profile with regard to its innovative technology foundation as an expression of its top priority—to establish itself as a profitable insurer, according to Beneducci. The carrier is on track to reach about $900 million in premium this year. “As significant as the premium volume is, we haven’t talked up our success—even as a startup—because we have considered this a foundation from which we can expand,” he explains. “We see the launch of ProSight Direct as a significant milestone in our journey.”

Beneducci has been exploring innovative customer-facing capabilities for commercial insurance during the better part of two decades. For example, as SVP of commercial business at Fireman’s Fund, he championed the iCustomer web portal in 2002. He later became CEO of the company and was recognized for his focus on technology. In recent years, he says, he has observed a dichotomy between incumbent insurers and startups/InsurTechs. He saw the trend starkly demonstrated at a recent industry event he attended, where panelists debated whether incumbent insurers should invest in startups or partner with them. “There was no conversation about whether the insurer should be the innovator,” he remarks.

Traditional insurers, Beneducci opines, have a difficult time breaking from traditional ways of doing business, impeded by their fear of alienating their distribution partners. Startups have built useful front-end capabilitie but lack robust, modern back-office processing and insurance expertise in general, he says. “It’s amazing the attention that startups get for generating premium of $10 million,” Beneducci comments. “The reality is that the vast majority are only changing one part of the insurance process.”

Startups’ strengths in some areas sometimes mask weaknesses in others, according to ProSight’s technology head Siry. Innovators focused on the front-end experience can deliver a quote and might be able to say they’re binding the policy, but they then hand it off to partners for servicing. “As a result, customers go to what they think is an insurance company, but the policy is underwritten by another entity,” he observes. “They have a disjointed experience where they must to go to the actual carrier to make changes, and claims may be handled by yet another entity that they didn’t realize they were doing business with.”

ProSight combines the best of both traditionalist and startup by digitizing the entire insurance value chain and exploring new ways of doing business through deep insurance expertise, Beneducci asserts. There are other traditional insurers selling commercial insurance online, but they tend to offer standard products, such as business owners policy (BOP), in a one-size-fits-all manner, Beneducci says.

For its direct channel debut, ProSight has carefully chosen not just the product line but the client segment within it, Beneducci explains. The insurer’s underwriters identified DJs making less than $100,000 as underserved clients, even by the carrier’s distribution partners—thus, offering those clients a direct sales opportunity doesn’t cause channel conflict. “On our team we have people who are or have been DJs and deeply understand the exposures those customers face,” he adds.

Siry emphasizes that the ProSight debut is not simply about marketing a traditional product online, but rather launching an entirely different business model where products and processes have been designed to be supported by technology and provide a simplified process. “We know the customers that want to purchase this way are different,” Siry elaborates.

The platform’s DJ insurance debut will be followed within a few months by other products, according to Siry. “Not BOP, workers’ comp or auto exposure—not the storefront but rather the individual, so the initial focus will be on professional liability,” he says. “Seventy-three percent of small businesses are individual professionals, so it’s a huge market.”

Beneducci stresses that ProSight has planned for its direct channel to grow slowly. “Companies owned by private equity firms have to drive growth to attract investment, but we don’t have that pressure,” he says. “Our approach is always to ensure that our business model is profitable.”

“Not only do I not have an expectation about what this has to deliver, but I’ve said the opposite,” Beneducci adds. “If it grows too quickly, we’ll throttle down; but if we’re hitting the right profitability, then we’ll hit the throttle harder. Once you feel very confident that you’re screening and underwriting risks properly, you can hit the accelerator with confidence. We have the patience to wait until we have that level of confidence.”