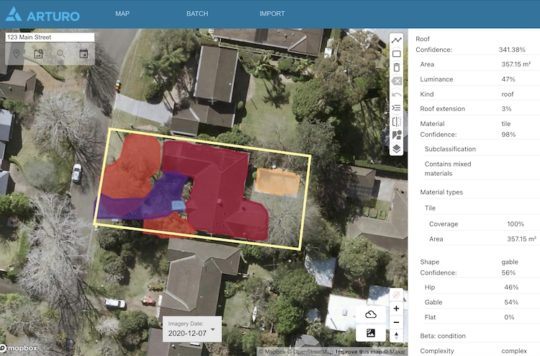 Arturo, an AI-powered platform that derives property insights and predictive analytics from aerial and satellite imagery, has raised $25 million in a Series B funding round led by Atlantic Bridge Capital, with participation from RPS Ventures and existing investors Crosslink Capital and IAG Firemark Ventures, the venture capital fund for IAG, Australia’s largest general insurer. 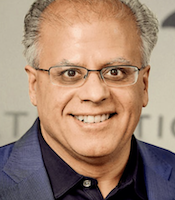 Arturo says it will use the new funding to expand its technical team to refine its technology, which extracts relevant property data from the latest satellite, stratospheric, aerial and ground-level imagery, as well as unique proprietary data sources, in as little as five seconds, according to the vendor. The company says that the round will also enable it to further establish partnerships with imagery providers to offer coverage in Europe and Southeast Asia and expand its client base of property and casualty insurers. In the coming months, the company also aims to roll out its offering to the commercial property sector and other businesses that engage with the built environment, including banks, other financial institutions, asset managers, among others.

In conjunction with the funding round, Arturo appointed two new members to its board: Sunir Kapoor of Atlantic Bridge, who brings a background in growing technology businesses to enterprise scale; and Samantha Wang of RPS, a board observer, who brings expertise working with technology companies in the U.S. and Asia.

“Over the past twelve months, Arturo increased its revenue over 300 percent, which speaks directly to the tangible value it offers to leading insurers,” said Sunir Kapoor, Operating Partner, Atlantic Bridge. “With these new client wins, Arturo now counts among its clients two of the top five P&C insurers in the US, in addition to the two leading insurers in the Australian market. With the success that jC and his team have had onboarding several new clients fully remotely over the past year, we’re confident in Arturo’s continued expansion in bringing AI to the insurance industry and beyond.”

Arturo describes itself as a deep learning spin-out from American Family Insurance (Madison, Wisc.) that delivers highly accurate physical property characteristic data and predictive analysis for residential and commercial properties for use in the property/casualty insurance, reinsurance, lending and securities markets.

The company reports that, since spinning out from American Family Insurance to become commercially available in 2018, Arturo has completed over 35 million on-demand property analyses for customers in North America and Oceania. As it has rolled out its platform to a growing number of leading clients, the company has also refined its technology, which increased the number of property attributes it can extract from aerial photographs to 71 within the past 18 months. The company recently announced partnerships with stratospheric imagery providers Urban Sky and Near Space Labs to bolster the frequency of its high-resolution image collection and to expand coverage in remote areas. It also announced the appointment of Roman Buegler to VP of research and development and Daniela Moody to VP of artificial intelligence.

Greater Transparency into a Building’s Physical Composition
“Arturo’s vision is to revolutionize the way businesses interact with properties by providing greater transparency into a building’s physical make-up, and we believe we’re only scratching the surface in terms of the level of value we can bring to our customers,” comments John-Isaac “jC” Clark, CEO, Arturo. “Our insurance clients are already using our technology to bolster their quoting, underwriting, and claims processes, but with an increasingly granular level of property information available in real time, we can envision insurers improving their customer responsiveness, offering things like a ‘safe driver discount’-type bonus for a client whose property’s condition is well-maintained. A deeper property understanding stands to benefit virtually every building stakeholder, and this capital infusion will enable us to accelerate our product roll-out to serve a growing array of business sectors and geographic markets.”