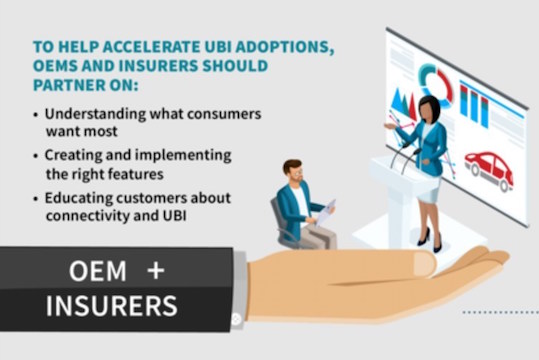 One of the most intensely debated questions about usage-based insurance (UBI) has been whether smart phones or separate “dongle” hardware makes the most sense. However, the 2017 LexisNexis Telematics Usage-Based Insurance Study suggests that onboard technology is likely to grow as a means of vehicle data collection for insurance purposes. The study looked at consumer awareness and attitudes toward advanced driver assisted systems (ADAS) and connected car features and found that while few consumers seek out these capabilities, the overwhelming majority of car buyers appreciated their benefits, especially those related to safety. Consumers are embracing technology in every aspect of their lives, including their vehicles. And, they’re willing to share information with service providers in order to receive the services they want and need. Auto original equipment manufacturers (OEMs) are a driving force behind improving consumers’ lives and accelerating usage-based insurance (UBI) adoption by designing and implementing customer-friendly and value-based features according to the LexisNexis Risk Solutions 2017 UBI study. (Source: LexisNexis Risk Solutions. Click to enlarge.)

The study found that only 15 percent of consumers seek ADAS and only 19 percent look for connected car features. As a result, drivers end up experiencing these technologies simply as a result of their being installed in their new car. However, 76 percent of ADAS car owners and 65 percent of connected car owners had a more favorable opinion after personally experiencing these features in their car.

The study also revealed that the more engaged consumers are with ADAS and connectivity, the more favorable their opinions of UBI, according to Pavan Mathew, Director of OEM, LexisNexis Risk Solutions. “Working together, insurers can leverage this attitude shift to drive UBI adoption while automakers can use the information to develop more valuable products and services that their customers want,”

Consumers’ favorable reaction to ADAS and connectivity reveals reasons they are likely to shop specifically for vehicles equipped with these capabilities, which suggest implications for insurers and automobile manufacturers, LexisNexis’ announcement of the study advises. The study calls out the following motivators:

Safety: This ranked as the most important benefit to drivers both for ADAS (80 percent) and for connected cars (69 percent). Owners of vehicles equipped with ADAS have also indicated that they have seen tangible value and benefit in terms of safety improvements as a result, which LexisNexis calls out as reason for both automakers and insurers to promote these results and positive sentiments to help drive adoption.

Customization of Features: While consumers value features such as adaptive cruise control, automatic braking, GPS/traffic warnings, smartphone connectivity, and lane change alerts, they want to retain control of their use. More than one-third of car owners with ADAS features (36 percent) and half of connected car owners (50 percent) would like to be able to disable some or all of these features. Consumers expressed similar sentiments about connectivity features, which they sometimes found distracting. Privacy Concerns: 70 percent of respondents expressed some reluctance to use ADAS if it enables UBI. Insurers and automakers should heed this concern and make privacy and security a top priority for their new UBI offerings. “The more transparent and convenient the program, the less likely they are to encounter barriers to adoption,” LexisNexis comments.

The study found that the majority of consumers regard UBI positively, especially if they are already engaged with ADAS and connected car features. That suggests that the time is right to escalate UBI adoption, along with promotion of the correlation of the technologies and safer driving—and thus of lower insurance rates. LexisNexis counsels closer collaboration between insurers and automakers with regard to consumers’ evolving preferences for onboard technologies.

As more cars come off the line with integrated telematics features, insurers will need to rethink how they handle vehicle data collection, affirms Jeff Goldberg senior VP of Research and Consulting, at Novarica (Boston).

“Rather than asking policyholders to install after-market devices or smart phone apps, insurers will need to build relationships with auto manufacturers or larger data collection organizations in order to analyze driver behavior,” Goldberg elaborates. “In time, insurers may end up sending out requests for a ‘driver score’ to a bureau much like they do for credit score today.”

Increased adoption of connected car technology will also mean that insurers will have access to driver scores for a much larger percentage of their client base, not just the ones who have engaged with a company-specific telematics initiative, Goldberg adds. LexisNexis finding of consumers’ favorable response to ADAS and connected car technology is good news for insurers investing in telematics, many of whom have been focusing on features to influence driver behavior rather than using telematics for pricing/assessment, he adds.

The study also calls into question the future of smart phone apps for telematics data gathering. While a mobile app is a less expensive automotive data-gathering option for insurers, it doesn’t have bring integrated safety features with a vehicle, Goldberg observes. “On the other hand, one major feature insurers have leveraged with mobile apps is limiting texting-while-driving, a major source of accident risk,” he notes. “To maintain both values, the future of smart cars may involve built-in vehicle features and a connected mobile application.”