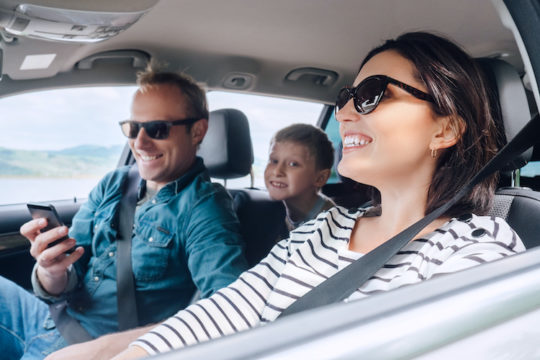 One of the selling points of telematics-powered auto insurance is that policyholders can influence how much premium they pay. The problem is that they can influence it for good or for ill. Plymouth Rock Assurance (Boston) decided to take a different approach, with its Road Rewards program—which only rewards and never punishes drivers. The program, which launched in 2018 and is now available in the six states that the insurer does business in: Massachusetts, New Hampshire, New York, Connecticut, Pennsylvania and New Jersey. 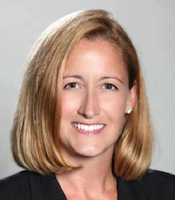 Road Rewards is similar to other telematics programs in that it tracks metrics such as mileage and hands-free phone usage, but instead of either positively or negatively affecting premium, it only rewards points for safe driving. These can be redeemed for items like fuel discounts, movie tickets and gift cards from Amazon and Starbucks. Every trip a driver takes is scored, for which points can be eared. Points awarded are deposited in a policyholder’s account weekly.

Plymouth Rock Assurance partnered with Cambridge Mobile Telematics (Cambridge, Mass.) to design a mobile phone based app. The app uses the typical features of smart phones used by UBI programs—accelerometer, GPS, clock—which the software uses to detect and record trips and produce a score based on the incidence of speeding, hard braking, hard cornering, rapid acceleration, and phone distraction.

Road Rewards was inspired in part by Plymouth Rock Assurance’s desire to offer policyholders value beyond the claim experience. “Our thinking was, ‘We’re Plymouth Rock Assurance, so we want to provide more than just insurance on the day you had an accident or an unfortunate incident in the home, extending to services and products that help you every single day and make the roads a safer place,” Boyd explains. “We’re very happy to offer this program in a way that offers benefits for our insureds and family members, particularly youthful or inexperienced drivers.”

Boyd adds that Road Rewards was also designed to meet consumer demand for telematics solutions—which continue to rise in popularity, not least because of the impact of direct-to-consumer companies highlighting their benefits. It also gives Plymouth Rock Assurance’s agents a product by which they can differentiate themselves, among other advantages. “It’s designed to help customers improve their driving, and drive more safely, which in turn improves loss ratio,” Boyd elaborates. “That helps our agents: as they’re writing more they can grow, and they can get better commissions, because the better their profitability is, the more we can afford to compensate them.”

Like other connected insurance products, Road Rewards is designed to boost customer engagement, and it has succeeded in doing so. Boyd reports that customers participating in the program and claiming rewards have a tendency to stay with the insurer 95 percent of the time.
“It’s certainly a great experience, as they’re getting good product, good service and now those extra benefits,” she says.

Plymouth Rock has been gaining a clearer picture of Road Rewards’ affect on driver behavior as data accumulates, according to Boyd. Some drivers are already nearly “perfect”—between 90 and 100 points in the program’s scoring system—when they join Road Rewards and they tend to remain at that level. Those who log lower scores start to improve through the self-awareness that the program’s gamification fosters. Boyd notes that

Among the gamification features is the ability to run competitions between up to 10 people—policyholders or friends who are not even Plymouth Rock customers—to see who is the best driver. The smart phone app can distinguish between drivers in a given household, or whether the policyholder is moving in a car or some other form of transportation, such as a train or boat, according to Boyd. The app is even capable of identifying when a policyholder is only a passenger in a vehicle, though it also lets policyholders tell the app when that’s the case.

Boyd notes that Plymouth Rock has worked with Cambridge Mobile and within its own technology to sign-up process from 15 steps to five. “It’s very straightforward—instead of having to go to a separate site, once we have the insured is ready, they get a quick link, we can do authentication and they’re off to the road—I don’t want to say ‘to the races’!”

When Road Rewards debuted in 2018, Plymouth Rock’s independent agents registered concern that customer would be reluctant to participate in the program, Boyd relates. However, the rewards-only design of the program eventually allayed those fears. “There’s been increasing comfort with that on the agents’ part,” she says. “We’ve found that customers are often even more comfortable than the agents.”

Adoption has been growing, reflecting general customer interest in telematics programs, which increased 30 percent in 2020 according to JD Power report. From the time in 2020 when Plymouth Rock had gone live for all of the states it does business in, Road Rewards has doubled the size of monthly active users. “It’s still a really fresh program, but every month a growing number of our customers want to use it,” Boyd remarks. “We look forward to that doubling and doubling again.” 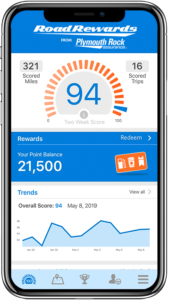 Boyd attributes the growth in the program to its engagement-and-reward qualities. While the insurer continues to monitor customer response, the calibration of rewards to points seems to be working well for all parties. “On average, our customers who are redeeming their rewards are redeeming about $65 a year in benefits—which that’s equivalent to 8 percent of premium,” she says. “Of course, we’re not doing that as a premium discount; they’re just getting that on top of that and they can use it for anything they want to buy.”

Among the available rewards, customers like the gift cards best. “Given how many people buy things on Amazon, that one took the lead,” Boyd reports. “As the world started opening up again from the pandemic, we’ve seen Starbucks grow in popularity.”

As a program that meets a customer need and helps agents differentiate themselves from other channels and carriers, Plymouth Rock expects the Road Rewards program to continue to grow. “We’re excited about the program, not just for today, but our ability to grow it to a much higher participation, with hundreds of thousands of drivers utilizing this program,” Boyd says. “Because when they are, whether it’s primary insured, or their child, partner, they’re safer on the road for everybody.”

Beyond the Traditional Insurance Product

As for the future of the program from a broader strategic standpoint, Plymouth Rock looks forward not to merely growing policyholder participation, but further exploring the insurer/policyholder risk-mitigation partnership that the design of the project implies, going further beyond the traditional insurance product.

“We look forward to be able to work with partners like Cambridge Mobile to do things that help our insureds not only avoid having accidents but get to them quicker if they have one, helping guide them through that scary situation,” Boyd says. “It’s our way of being there, meeting them where they are and helping protect them.”