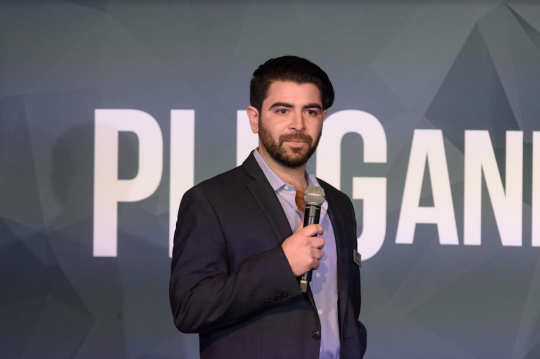 (Hutch Moragne speaks to a crowd of investors, corporations, and startups and Plug and Play’s 2017 Winter Summit.)

The Plug and Play Tech Center InsurTech Accelerator (Sunnyvale, Calif.) launched in May 2016, as a spinoff from the larger, horizontal industry Plug and Play founded a decade earlier. Interestingly, the InsurTech Accelerator grew not out of Plug and Play’s FinTech program but rather its Internet of Things (IoT) Accelerator, which had notable insurance carrier participants. The organization currently has 65 partners and its Silicon Valley headquarters is supported by international branches in New York, Munich, Tokyo, Singapore, and Beijing. To discuss what makes Plug and Play InsurTech different, we spoke with James “Hutch” Moragne, Corporate Partnerships Manager.

Insurance Innovation Reporter: Tell us how the Plug and Play InsurTech Accelerator emerged out of the IoT branch of Plug and Play.

Hutch Moragne, Plug and Play InsurTech: Munich Re, State Farm and Sompo were participating in our IoT program. Robert Mozeika, Innovation Executive at Munich Re America saw an opportunity for an insurance program, given that our ecosystem already covered Fintech, IoT, Retail and Branding—resulting in our having quite a few startups quite relevant to the insurance industry. We discussed this with the insurers in the IoT program, and also with USAA, which participated in the Fintech program. Munich Re was pounding down our door to create a program. Our founder Ali Safavi did a due diligence report on the industry and it became clear that insurance was on the verge of massive evolution. IIR: How has the insurance industry changed as Plug and Play InsurTech have become established and the InsurTech environment broadly has become important to the industry?

HM: We’ve seen a couple of thing happen. There has been a huge increase in internal teams created to drive innovation or manage startup partnerships. That includes VC units, innovation scouting teams, and ideation and product labs. The emergence of loud infrastructure and internal operating efficiencies have made it much easier for startups to build and deploy enterprise-grade software.

IIR: And these measures and advantages are helping insurers to consume externally created innovations?

HM: Yes, they are, but a major pain point that remains for the internal innovation teams at insurers is that they have trouble communicating with the business units—what you might call the cultural adoption side of new technology. We’re trying to help them solve that by getting business units involved in the deal flow from needs assessment to evaluation of the partnerships and actual running of pilots.

IIR: And how are your efforts working out practically, how are the structures you’re building helping insurers to get better at adopting innovations?

HM: For example, if we open an office in Munich, it eases the challenges for, say, Munich Re and Allianz to assemble an underwriting team and interact with startup companies first-hand. They no longer have to come all the way to Silicon Valley. It also helps the startup companies to gather feedback, find product/market fit and cut down the time needed to reach the pilot stage and eventually get to full deployment.

IIR: Review with us how your process works.

HM: Every six months we source 1,000 startups. Based on research reports, surveying our partners and considering trends we’re aware of, we narrow that down to 150 companies. We flesh out that list of 150 and our partners receive the list and vote on it. We then take the 60 highest performing startups and invite them to pitch on stage to our partners.

Through a final round of voting, our partners vote for 35 startups that are officially accepted. It’s important to note that are partners are not merely engaging with this final 35; rather, they have access to thousands of startups in our system. We have a database of 10,000 to 15,000, every one of them manually sourced, talked to and implemented by our team of about 50 analysts worldwide. The batch is very important, but there are so many niche applications—say, telematics in Brazil—that it’s important for partners to be able to engage with anyone they want. We’re the filter in this massive startup ecosystem to make sure they’re talking to the right people at the right time.

IIR: How would you characterize the way Plug and Play InsurTech differentiates itself from other accelerators?

HM: For starters, Plug and Play is the world largest corporate innovation platform, with 220 corporations participating globally in over 25 locations. We’re constantly experimenting with different models and gathering information about what works well, creating a giant feedback loop of best practices. First and foremost, we’re an open collaboration platform: many partners can join the same program. We can also do custom internal programs—for example, we run BNP Paribas’ accelerator in France.

I would cite three other specific aspects of how we operate. First, we don’t require equity from our startup companies. They’re reluctant to do so and they shouldn’t. We want it to be as easy as possible to sign up in order to remove all barriers from including the highest-quality entrepreneurs. Second, we are stage agnostic: some startups are in the seed stage, some are C-series. Third, we’re decentralized: you don’t have to be in Silicon Valley to participate in the program. Great founders and great code can be found anywhere in the world, and it’s unrealistic to expect that to only happen locally.

IIR: What are some of the advantages you offer to the startups?

HM: We provide free office space, access to VC funding, access to major regulators, an expert network of mentors—even IT infrastructure. The goal of all these is to alleviate all counterproductive pressure on the startups so that they can focus on developing their products on behalf of our partners.

IIR: What are some of your ambitions for extending the benefits you offer partners and startups?

HM: We want to become far more global. We have fleshed out programs in all the major insurance strongholds and we have a long list of other locations that we’re considering. We also want to become more integrated with the business units to make sure that everyone in our partners’ organizations can leverage our startups’ innovations.

We also want to facilitate more partnerships from startup to startup and corporate to corporate. And not just between insurance companies. For example, we want to help our Supply Chain or Mobility partners to collaborate with insurance partners, or startup companies that have complementary solutions. We want to more effectively bundle our startups’ solutions to create a more fleshed-out product offering.

IIR: How do you envision that working on a practical level?

HM: I like to use an analogy to the Swiss Army knife. Much enterprise software is like that: many tools, but they’re not fleshed out, lack robustness and still don’t fit all the unique needs of our many different insurance partners. Ultimately a Swiss Army knife won’t put a table together: you need a saw, hammer, etc. The idea is to bundle together more robust and varied solutions that you can integrate on a customized basis at the application interface layer.

I would add that we also want all the players in the ecosystem. We already have several reinsurance partners—Munich Re, Hannover Re, Skor and Swiss Re. We have Aon Marsh and Towers Watson on the broker side. Carriers include those mentioned as well as Allianz and Zurich. We also have service partners, for example Guidewire on the solutions side and Deloitte on the services side.

We’re also helping our insurance partners more broadly through something we call Enterprise 2.0 that we launched under the Insurance umbrella. This focuses on the rest of business operations, including HR optimization, legal technology, accounting technology and IT infrastructure.