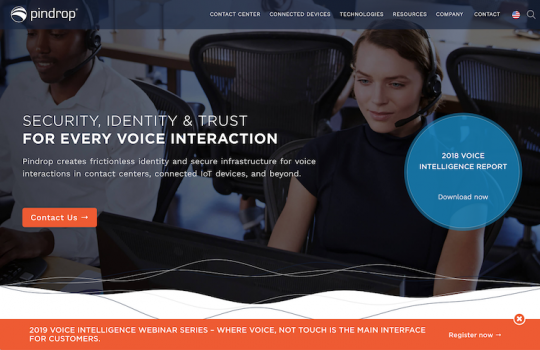 Pindrop, an Atlanta-based provider of voice security and authentication, announced this week at CES 2019 that it had launched its Voice Identity Platform to extend its existing enterprise-grade technology beyond the call center and into the Internet of Things (IoT), voice assistants, smart homes and offices, and connected cars. The company reports that it has established itself in the financial services industry, with five of the seven largest insurance companies and eight of the ten largest banks as customers. With the launch of Voice Identity Platform, Pindrop says hopes to reach several new key market sectors. “Voice has emerged as the interface for more than 100 million consumer and enterprise devices, and yet customers lack the level of security, identity and trust that are offered by traditional channels,” comments Vijay Balasubramaniyan, Co-Founder, CEO and CTO of Pindrop. “Voice is the only interface that elegantly combines content, intent and identity allowing frictionless authentication at the same time as communicating at the speed of thought. Pindrop’s goal is to secure every voice interaction and our new Voice Identity Platform achieves a major milestone by bringing enterprise-grade security to the forefront of connected devices.”

With regard to insurance specifically, Kevin O’Brien, Sales Director, Pindrop, notes that in the coming year, the insurance industry will further advance into the realm of IoT capabilities to enable consumers to submit claims and access sensitive information on mobile devices, among other potential applications. “As insurers look to expand the voice interaction channel to include IoT, it will be important for them to establish a consistent identity and authentication approach leveraging enterprise grade voice biometric technologies like Pindrop,” he comments.

Pindrop describes the extension of its capabilities to new domains as follows:

Smart home security vendors rely on user interaction with pincodes and companion mobile apps for sensitive transactions. This results in high friction and poor user experience especially for accessibility related use cases. These issues and concerns have resulted in a slow adoption of voice technology in the smart home industry. Having secured more than one billion voice transactions a year for global Fortune 500 enterprises in some of the most at-risk environments, Pindrop’s relationships with international IoT leaders and manufacturers, such as Allegion, put it in a good position to bring secure, voice-based access to IoT devices like smart locks. Pindrop will provide a new level of peace of mind, security and access to the millions of consumers using connected devices.

“In 2019, Allegion and Pindrop are focused on bringing an extra layer of security to Internet of Things devices. Following Allegion Ventures’ strategic investment in Pindrop during its Series-D funding round, we are exploring how to leverage our unique technologies to drive both improved security and seamless access,” said Rob Martens, Allegion Futurist and President of Allegion Ventures. “Allegion’s brands like Schlage, Von Duprin and LCN are well-known pioneers across consumer, commercial, educational and healthcare markets. We see tremendous potential for voice authentication solutions, and Pindrop has tremendous expertise in this area.”

Today, consumers who interact with their bank, brokerage, or their smart home through voice-enabled devices are forced to remember and speak 4-digit confirmation codes before proceeding with sensitive transactions. With Pindrop, developers can now deliver feature rich, frictionless, high-value transactions for their voice applications with multi-factor identification technology.

“Discover is focused on providing a secure and seamless banking experience for our customers, especially as popularity grows for mobile devices and virtual assistants,” comments Dan Capozzi, EVP and President of Credit Operations and Decision Management, Discover. “Working with companies like Pindrop will help us offer our customers a secure way to manage their accounts and track finances through voice-enabled devices.”

Speech recognition is becoming increasingly common in connected cars; however, existing technologies lack enterprise grade security and strong authentication capabilities, which hampers adoption and erodes consumer confidence regarding sensitive voice interactions in vehicle. To address this, Pindrop is partnering with several of the largest global automotive manufacturers to provide a personalized and secure voice-enabled experience for drivers.

Voice Identity for the Smart Office

Smart office communication technology providers such as Zoom, Plantronics, Cisco and Polycom are quickly developing the workplace of the future, enabling a workforce that can connect, share and collaborate from anywhere all with the power of their voice. Leveraging the world’s first, end-to-end deep neural network-based speaker recognition technology, Pindrop now provides security for shared devices, making it possible for enterprises to deploy smart office capabilities that are truly secure. Functions include the ability to accurately identify specific individuals on conference calls, and provide employees access to sensitive data such as the latest update on a business deal, using voice identity.

Beyond consumer IoT products and services, Pindrop will embed its technologies into healthcare and commercial facilities. Leveraging its strategic partnerships, Pindrop is uniquely positioned to insert its voice security and authentication technologies in hospitals, medical offices and schools across the globe.

By utilizing Pindrop’s voice-enabled technologies, hospitals and medical offices can prevent potentially dangerous intrusions and the spread of germs and infections from fingerprint access points, as well as enhance mobility for healthcare workers looking to move freely when transporting patients and completing other tasks.