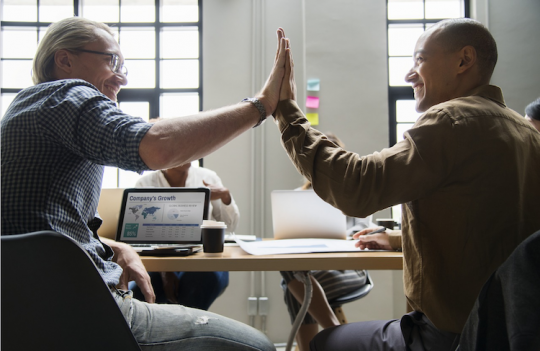 It’s no exaggeration to say that the InsurTech revolution is the most exciting change to happen to the commercial insurance industry in, oh, 300 years or so. Almost overnight it seems, an industry that has habitually shunned change is on the verge of embracing digital disruption with open arms. Once viewed as slow and stodgy, suddenly commercial insurance doesn’t look so sleepy anymore.

The monumental transition we’re currently living makes me think of that old saying, “May you live in interesting times”—which, depending on how you look at it, can be taken as a blessing or a curse. There’s comfort in doing things the same way we’ve always done them, whereas change brings uncertainty, and sometimes disorder and conflict—all things that risk-averse insurance executives have traditionally avoided at all costs. This innate discomfort with disruption can lead to friction and drama in the relationships between large insurance companies and the small InsurTech startups with whom they are partnering.

Certainly, large insurance companies and small, early-stage startups (insert stereotypical image of five guys working in a garage here) are strange bedfellows. It’s a little like David and Goliath deciding to set aside their differences, lay down the sword and slingshot, and go out for beers together. But the simple fact is that insurers and InsurTech startups need each other to make digital transformation happen, so learning how to work together is imperative. I’m not an organizational psychologist—or a marriage counsellor, for that matter—but based on my experience running a startup, I can offer some advice for insurers looking to get the most out of their insurer-InsurTech relationship.

The startup mantra of “move fast and break things” is antithetical to the risk-avoidance culture of large insurers. It may sound counterintuitive, but to prevent a failed insurer-InsurTech relationship, both parties must learn to embrace failure. Don’t wait for perfect results before putting a solution into production, and don’t be afraid to “fail faster and fix it later.” It’s better to fail at the start of a project than at the end when you’ve already sunk a ton of time, effort and money into the initiative. Couples that fail together stay together.

Many large carriers and brokers have a one-size-fits-all procurement process no matter the size of the InsurTech vendor or whether the project is a pilot or a full implementation/multi-year contract. It can take as long as 12 to 28 months to get from an initial conversation—call it a first date—to a live initiative. Long and complex procurement cycles can kill a startup. The math is simple, and it isn’t on their side. Startups typically fundraise enough financial backing for the first 18 months of operations. If the procurement process takes longer than 18 months, the startup will run out of money and be dead in the water before they can negotiate a contract and begin to prove their worth. Finding ways to streamline procurement and shorten the runway from POC to production will benefit everyone. If you take too long to get an InsurTech solution into production, what you’ve built may already be obsolete by the time it is rolled out. The business case may have changed, or the market may have moved on. If you really want to get engaged, don’t hesitate: “Put a ring on it” before it’s too late.

In tandem with lengthy procurement and legal reviews, extremely complex IT and security compliance requirements for pilots can bog down the pace of innovation. For a startup on the verge of a pilot, a large insurer’s compliance and IT questionnaire can be daunting to say the least. And given the timing, it can feel like a “TMI” moment: Imagine going out on a first date with someone who wants to know absolutely everything about you and your whole life story before dessert. Consider developing a lite compliance and IT questionnaire and process for insurtech pilots and save the full, exhaustive, due diligence versions for the production phase. Likewise, for legal review, insurers typically want the master service terms (MST) on their own paper. That amounts to LOTS of paper. For a pilot, consider using the startup’s lighter weight paperwork to expedite the process. This will allow you to move faster into the pilot, prove out results, and get to production usage faster. Remember that the common goal here is to help the startup live long enough to finish negotiating with you.

It’s the insurance industry equivalent of the dating game (I’d call it speed-dating but, unfortunately, it’s not that speedy): innovation teams within large insurance companies call in InsurTechs to present their solutions. They sound interested and ask a lot of questions, but the discussions don’t really seem to go anywhere. If you dig a little deeper, often you find out there is no budget earmarked for the initiative, no real clearly-defined business case, and no one from the operational side of the business in the meeting. To put it bluntly, innovation for the sake of innovation is pointless and a waste of everyone’s time. Make sure your innovation teams are integrated into the core business rather than isolated from it. The worst thing insurers can do is establish an innovation lab that’s off in a corner somewhere, separated from the larger organization, and led by someone who is not execution-oriented or directly involved in the business. If you want to achieve real business results and ROI from your InsurTech investments, make sure that the business is driving the innovation agenda.

All digital transformation initiatives have one thing in common: they are driven by data. Artificial intelligence solutions, for example, need large amounts of data to train their models. If you want to get off on the right foot, start by getting your data in order. Work with your InsurTech partner to identify what data is needed for a successful outcome and begin to collect and organize the required data. This all-important data collection phase can take longer than you think with enterprise data stores and data lakes growing larger and deeper every day. There’s a tendency for large organizations to think their data is more accessible than it actually is—until an InsurTech asks, “Can I get access to this?” Questions around data usage, privacy and security may also arise that take time to resolve. Identifying the various gatekeepers who control the data and getting them on board with the project and its goals, will go a long way in eliminating bottlenecks and delays once the initiative is underway.

Within the commercial insurance industry, the current pace of technological change is unprecedented, but obstacles remain. In his recent book Transforming Legacy Organizations: Turn your Established Business into an Innovation Champion to Win the Future (Wiley, 2019), Kris Østergaard writes, “Many established organizations have a status quo culture that causes you to prefer avoiding loss over winning. This attitude is a barrier to change and holds innovation back.”

It takes sustained effort for large commercial carriers and brokerages to “turn the ship” and truly embrace innovation and meaningful change. KPMG found that 84 percent of CEOs said they want their employees to feel empowered to innovate, without worrying about the negative consequences for them if an initiative fails. However, in the insurance sector, only 57 percent said their organization currently has a culture where ‘failing fast’ innovation initiatives, regardless of their success, are celebrated.

While the InsurTech revolution has certainly spiced things up in commercial insurance, there is more work to do to ensure that we see the full benefits of innovation and disruption. Fundamental change is never easy, but it is necessary for commercial insurance companies to compete globally, grow, and attract new generations to the industry. Insurers and InsurTechs will need to establish deeper relationships to make digital transformation a reality. It’s time to get serious and take the insurer-InsurTech relationship to the next level.