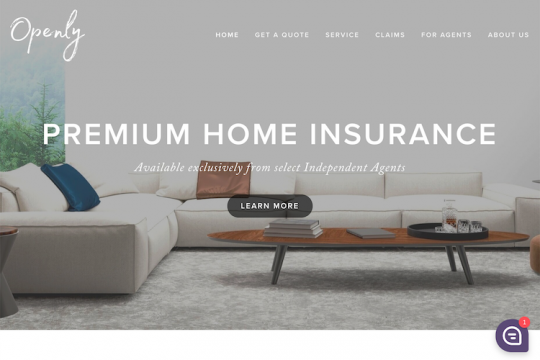 Openly explains its focus on the agent by citing a 2019 report from the Independent Insurance Agents & Brokers of America noting that 35 percent of consumers choose to shop through independent agents. While most InsurTech startups are focused on selling insurance directly to consumers without agents, Openly sells an up-market home insurance exclusively through independent insurance agents. Relic of the Past?

“Some people in the tech world think that the term ‘insurance agent’ refers to a relic of the past, but they’re wrong,” comments Ty Harris, CEO and Co-Founder, Openly. “At Openly, we know agents add value by delivering objective advice and options to their clients. Our goal is to help agents as they work to modernize their businesses. We let them offer their customers better, faster and more economical products with comprehensive insurance protection for a wide range of needs. We’re pleased to have the support of such heavyweight investors and reinsurers to fuel our rapid growth into 2020 and beyond.”

Openly notes that its founders have roots in Boston and experience across both the insurance and technology industries. Co-founder and CEO Ty Harris is an MIT alum and a credentialed actuary who previously served as Chief Product Officer at Boston-based Liberty Mutual. His co-founder and CTO, Matt Wielbut, served as the VP of Technology at Goldman Sachs and also ran his own successful retail insurance agency. Harris and Wielbut founded Openly in 2017 and participated in the Techstars Boston accelerator program in 2018. Openly describes its first product as premium homeowners insurance designed for customers who value broad, innovative and responsive coverage. The product is currently available in Illinois and Arizona.

With the new capital, Openly plans to expand rapidly by adding Massachusetts, Pennsylvania and Tennessee during the next few months, along with four additional states in the near future. The company says it will also launch complementary product lines, such as automobile insurance, with a focus on simplifying and modernizing the process for consumers.

“The expertise that Ty and Matt share makes them the perfect team to tackle the challenge of modernizing home insurance,” comments Zachary Bratun-Glennon, Partner, Gradient Ventures. “Openly offers a combination of pricing sophistication, cutting edge technology, insurance expertise, and innovation that is unparalleled in the industry.” Consumers using Openly can receive a bindable quote on a highly-valued home with just three questions, according to a company statement. Openly says that it writes its policies on a comprehensive contract that provides more complete coverage and covers more loss types than standard contracts. Openly also vaunts what it characterizes as uncommon product features, such as guaranteed replacement cost on a home up to $5 million, endorsements to cover home-sharing, optional coverage to insure losses arising from cyber bullying, and true coverage customization that isn’t available in most contracts. The company says it will also add flood and umbrella liability coverages as endorsements on its home policies.

“Openly is a fantastic business partner,” comments Tom Ward, President and Owner of Thomas Ward Insurance Group (Chicago). “Its combination of product and technology is unique in the marketplace, provides top tier coverage, and is something that our agents and customers are really embracing. Openly is at the forefront of bringing new technology and product simplicity to the independent agency channel.”

An Insurer’s Path to Cloud Enablement: 4 Steps to Get You There