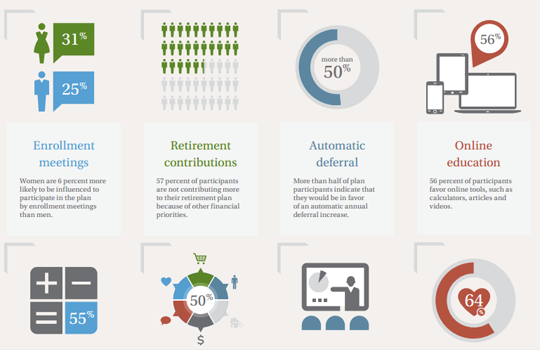 (Detail from findings of retirement plan participant behaviors from the OneAmerica Survey. The full graphic can be seen by clicking here.)

Insurers struggling to achieve business growth should think about how technology can help them to become better “protection consultants,” — addressing what might be called the underinsurance problem. A similar opportunity exists to make customers of people who possess retirement assets but don’t know what to do with them, based on the findings of a new survey by American United Life Insurance Company (AUL), a subsidiary of OneAmerica (Indianapolis). The survey found that less than half of retirement plan participants over 50 have considered a withdrawal strategy for their retirement assets.

The survey polled visitors to OneAmerica’s retirement plan participant website to better understand their behavior, and to learn which resources were more likely to help them make decisions about retirement. Of over 7,500 respondents, about 2,800 were aged 51 or older. Among the top-level findings were that 64 percent of respondents had considered how to pay for healthcare after retirement, but only 43 percent had considered a withdrawal strategy.

Respondents’ lack of preparation in this regard presents an opportunity for OneAmerica to further engage with and help their participants better plan for their retirement, affirms Marsha Whitehead, VP of marketing for retirement services and employee benefits, OneAmerica. And to the extent that the company’s customers represent their age cohort, it signals the opportunity for the life & annuities industry generally. The survey also found that 51 percent of respondents who had a withdrawal strategy had considered an annuity.

“We’re glad consumers are considering healthcare as a major part of retirement expenses—as they should—but they also need to have a plan for how to withdraw retirement assets and maintain an income throughout their life,” Whitehead comments. “Managing income in retirement is especially important given the additional healthcare expenses and the uncertainty of how long you’ll need it.”

The opportunity of underinsurance – or under-preparation for retirement – is limited by the disposable income of consumers. Insurers have to aim for people who can afford more protection for life, property or income security. There are certainly P&C personal lines customers who reflexively pay a minimum but would benefit from better coverage or coverage for more of their possessions. Research has shown that younger people often wildly overestimate the cost of life insurance. In in the case of retirement, the OneAmerica survey shows that there are people who have assets and simply haven’t thought about their most prudent disposition.

With regard to the problem of reaching genuine prospects, another important finding of the OneAmerica survey was that the great majority – 68 percent – of respondents welcomed assistance with their post retirement withdrawals and investments. That indicates to some extent a willingness in this population to have the conversation, which is what every agent and financial advisor wants. But it also suggests the possibility to use technology in self-service mode to help retirement plan participants to make decision. Fifty-six percent of respondents to the OneAmerica survey favored online tools, and 55 percent said that they’re not sure how to calculate their retirement. That validates the use of dynamic functionality, including gamification and related capabilities such as dynamic documents. And it validates the wisdom of sites that incorporate those elements, designed from an “outside-in” perspective of user preferences, as exemplified by sites such as Prudential Annuities’ IncomeCertainty.com.

(Related: New Lease on Life: How Technology is Boosting the Sale of Life Insurance and Annuities.)