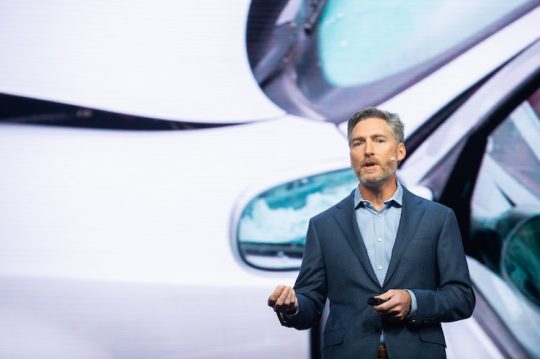 Mike Rosenbaum, who became Guidewire Software’s CEO roughly 90 days ago, began his address at the company’s Connections user group meeting in Washington, D.C., with the observation that there was something different at the event this year than any previous Connections. “I’m going to give you a second to think about it,” he quipped. Rosenbaum went on to address what he had learned about the company’s customers’ priorities and to speak about Guidewire’s investment in cloud computing. Marcus Ryu, Chairman and co-founder of Guidewire and the company’s prior CEO since 2010. (Click to enlarge.)

After a brief greeting to the audience, Rosenbaum invited onto the stage Marcus Ryu, Chairman and co-founder of Guidewire and the company’s prior CEO since 2010. Ryu observed that he had made many personal promises to customers that he is determined will be fulfilled both in letter and in spirit. “And I have to ask that whatever measure of trust you may have invested in me personally, that you and your organizations transfer that trust wholesale to my successor, Mike,” Ryu said. “He is truly the right leader for this company. He truly understands how to build great products and a great platform.”

“He truly understands what it is to unify a great team and to motivate it; and he truly understands the depth of urgency that all of you feel for a platform that delivers at scale, that delivers with speed, with simplicity, and at lower cost,” Ryu added. “I, in my role, will be doing everything in my power to ensure that he and this great team succeeds in fulfilling that mission.”

Resuming his address, Rosenbaum likened the challenge of learning about Guidewire and the insurance industry to the phrase, “Ship, shipmate, self,” which he learned when he joined the crew of the U.S.S. Nevada, a nuclear submarine based in the Puget Sound. The phrase means that what’s good for the ship is good for the shipmates, and in turn for the sailor himself, Rosenbaum explained. “This phrase has just been so meaningful to me ever since—it’s something that I’ve taken to every single company and every single group that I’ve had the opportunity to lead,” he added. “And I think that thinking about joining Guidewire, this really feels like a place in which we’re oriented to think that way.”

Rosenbaum, who has not worked for an insurance-specific company in the past, noted that while he was new to the industry, the Guidewire team is not. “Our mission has not changed,” he declared. “Our mission is to serve you with a technology platform that enables you to accelerate…to grow…to innovate in a time of unprecedented change.” He characterized Guidewire’s success in the property/casualty sector as unprecedented and said, “We’re now excited to be able to say that we have over 380 customers.”

When talking to Ryu about joining the company, Rosenbaum said that within Guidewire, core system transformation projects were likened to “tunneling through granite,” in recognition of the arduous task faced by the company’s insurance carrier customers. “I don’t know whether he was trying to scare me, but he really got me excited,” Rosenbaum commented. “[Ryu] said, ‘These are some of the most difficult projects that people do in their whole careers and we do that with them,’ and I was like, ‘That is exactly the kind of work that I want to do.’”

Since taking on his new role, Rosenbaum said, he has been asking customers about their priorities for Guidewire. He summarized these as the following three desiderata: simplifying clients’ IT environments; helping them to take advantage of data captured by core systems in order to make better, smarter and faster decisions; and helping them to increase their agility in order to be able to innovate more quickly.

Rosenbaum stressed a problem of the “fundamental complexity” of technology projects, illustrated on the screens behind him by exhaustingly detailed system flow charts. “When you’re faced with a situation like this, I think it’s incredibly important that you find ways to centralize, to standardize and to share and gain leverage from everything that you possibly can so that you can take your resources, your people, and your time and focus them on the aspects of that complexity that are specific to your business,” he said.

Cloud is the capability that will allow companies to centralize, standardize, and share in order to effectively—and economically—differentiate, Rosenbaum elaborated. He identified Amazon Web Services as an enabling partner, as well as referring to Guidewire-specific cloud services, such as authentication, auditing and monitoring as a foundation. “Then we add an application platform and a data platform and we have a team of people, operational and support people, that are specifically focused and optimized around providing this service to all of you,” he added.

Guidewire now has over a dozen customers that have decided to move the cloud, not including over 30 customers of the vendor’s cloud-based InsuranceNow system suite for smaller insurance operations, Rosenbaum noted.

Rosenbaum made a distinction between “on-premise” and “self-managed” with regard to implementation options because some Guidewire customers are moving their systems into the cloud, but under their own management. “We are completely committed to this mode of operating Guidewire,” he stressed. “I completely recognize that it is up to you, and it is up to your timelines and how quickly you will make the decision to move to the cloud.”

Eventually, economies of scale will make cloud the logical choice for everyone, Rosenbaum speculated. And while he said that Guidewire will support customers making that transition on their own timeline, he added that version 10 of Guidewire’s InsuranceSuite should be the last major upgrade the firm’s clients should ever have to do. He referred to, “smaller, more frequent updates, eventually even continuous and automatic updates. This is where you will start to see cloud native extensions added to the product line.”

Rosenbaum said that the company intends to take the same product and run it on top of AWS. “The key point is that’s the same product. We didn’t take a team of developers and put them in a room for two years and say, ‘Build us a new Guidewire’—and that’s the new Guidewire Cloud product,” he commented. “We took the existing product, with 18 years of IP and the 380 customers that we now have live and all of that learning and all of that capability, and that’s what enables us to offer a fully capable suite of solutions as part of the Guidewire Cloud.”