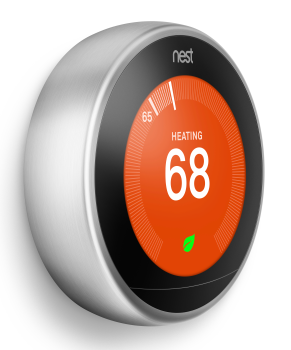 Nest Labs (Palo Alto, Calif.) has introduced the 3rd generation Nest Learning Thermostat which has a slimmer profile, a larger high-resolution screen and an updated user interface that the vendor says is desiged to make it easier for users to read temperatures, alerts and messages. The new model also has enhanced software, including Farsight, which automatically displays the target temperature or time when it senses movement in the room, and Furnace Heads-Up, which uses diagnostics to give advance notice about possible problems with a customer’s heating system. Tools such as the new Nest model represent the next step in the insurance industry’s adoption of the Internet of Things (IoT) following telematics and usage-based insurance (UBI), according to Stephen Applebaum, managing partner, Insurance Solutions Group (Chicago) and co-chair of the Insurance IoT USA Conference.

“Property & Casualty insurance carriers have now begun to realize the transformative potential presented by the broader IoT—not just connected cars but property and people as well,” Applebaum says. “We can expect many more such products and programs to proliferate as more and different IoT devices come to market, consumer and businesses install them and carriers learn how to collect, manage and leverage the torrents of data they disseminate.”

The 3rd generation Nest Thermostat will also include the following integrations with Nest Protect and Nest Cam, which were also available in previous generations, according to the vendor.